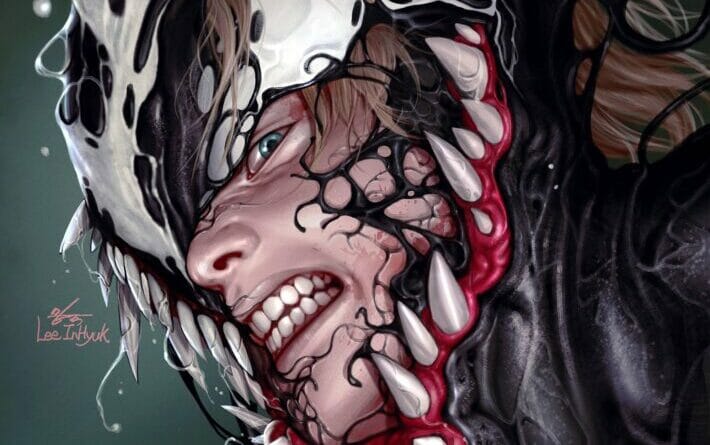 After Knull’s invasion, Eddie found himself ruling over the symbiotes. The new King in Black would leave his son to help other planets impacted by the incident. This would cause the younger Brock to have hate towards a few individuals. Dylan despises the world, his father, and Venom. However, the young man knows he has a target on his back. Eddie must save his son before he is abducted. Yet, Eddie is quite literally a shell of his former self. Also, he has to deal with a futuristic being with glowing red eyes. Dylan and Eddie’s adventures continue in this surreal storyline.

Helicopters and an explosion start the issue. Then, Venom informs Dylan about the fate of his father. To understand how we got here, let’s start about twelve hours prior. Eddie and a handful of his followers are helping out the galaxy, 12,000 light-years away. The King in Black and his soldiers encounter a ship. Unbeknownst to Eddie, one of his men is actually his next enemy.

Eddie enters the aircraft and his soldiers scatter around. One of them is spotted by Skrulls and radios to Eddie about discovery. Eddie then finds himself in a fight with the aliens. Meanwhile, Dylan is at the principal’s office, after getting into another fight. He is now facing expulsion for the repeated offense.

Dylan then leaves and is greeted by his half-brother, Sleeper. This symbiote is the child of Eddie and Venom. The brothers walk throughout the rainy city talking about their father. His absence and frustration that has been, but somehow Dylan understands. The two find themselves home and are watched by a mysterious figure. Back in space, Eddie makes quick work of the Skrulls. Eddie then hears cries for help; coming from his soldiers. All of his men are killed by the red-eyed bandit. He thinks this could be the return of Knull or even Carnage. Yet, this is something entirely different. They are then threatening to take Eddie’s throne. The villain then disappears — “Infinity War” style, while stating their victory.

Eddie then evacuates the remainder of his men. He is now on his way to Earth. A sleeping Dylan is woken up by his father. Eddie tells Dylan to pack, so they can relocate. While this goes on, Eddie asks where Venom is. Dylan has no idea and pack. He is also still mad with Eddie, then receives a phone call from him.

The real Eddie informs Dylan that he just talked with an imposter. The confused child is then told to act naturally. After which, he is instructed to find his father at an old motel. Dylan listens and is about to Eddie again. Eddie then thinks about his new rival. He then decides to shift his mind to the future. This is so he can uncover what happens in the future.

Eddie’s mind is falling throughout time and space. He calls his son and Dylan shows up soon after. Dylan makes his way to his father’s room. However, he is the target of a missile attack. Venom saves the young man and bonds with him. These people are after Dylan and we have no idea why. Dylan fights off the air raiders and gunmen.

While this happens, Eddie’s consciousness continues to fall. He then finds himself in an alien garden. He is also covered in a symbiote. A voice then tells him that he rebuilt his body. This being is named Meridius and he promises to help Eddie. The closing of the issue sees Meridius being shown the remains of Eddie. He then alludes to the fact this event already happened.

This was a very solid story. The duo of Al Ewing and Ram V did a nice job! I liked how we shifted from what Eddie was up to and what Dylan was up to. Both of them had been dealing with Venom in some type of way. I also liked how Dylan was rescued by the very thing his father told him to avoid. Finally, Sleeper’s involvement with the story was good too. He is pretty important. Seeing him talk with Dylan was awesome.

As for the art, Bryan Hitch, Andrew Currie, and Alex Sinclair did a great job! The new design of Venom is great! I also loved seeing the one-shot of Dylan donning the symbiote. The two newest character’s designs, especially the latter, were beautiful! Also, I enjoyed the look of Sleeper as a cat. The details are present in the issue.