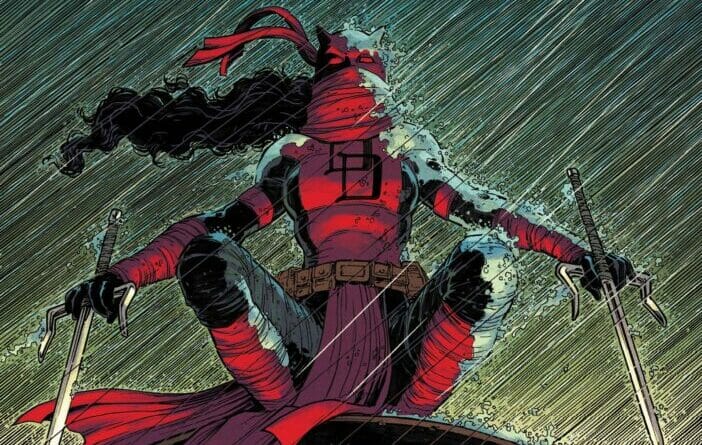 
Can Elektra escape her past sins? – Spoilers Ahead For Daredevil: Woman Without Fear #1

Daredevil: Woman Without Fear #1 is written by Chip Zdarsky with art by Rafael De Latorre. We start with a summary of recent events involving Elektra. In her quest to defeat the demonic Hand cult and win Matt Murdock as an ally, Elektra Natchios recently took up the Daredevil mantle. Wilson Fisk, the former Kingpin of Crime and current Mayor of New York, has made his move against his old enemy, Daredevil, by outlawing superhero vigilantism within the city limits.

We open the story to see Elektra confronting Kingpin. She feels like Fisk has been allowed to live for too long. He has recently outlawed superheroes, arresting them on sight if seen. She thinks the superheroes are cowards for letting him get away with so much. When a simple stab through the heart would solve everyone’s problems.

Fisk tells her he has files on tons of superheroes that he plans on using. Her file he gave to someone who asked for it specifically. He tells her the person who asked for it said to meet him where she first tried to recruit Daredevil to The Hand. She then leaves, deciding to do nothing because she is trying to give up her assassin ways.

She then goes to find Matt Murdock, showing up at his place. She talks about how much she loves him. How she needs him to take out The Hand but she also just needs him in general. You can really feel how much she cares for him. She tells him that she went to see Fisk and how she’s worried about how this all will go down. She is so used to killing her problems away that she feels she will be tested to go back to her old ways. He tells her that whatever this new threat is they will face it together. They get passionate. Elektra then asks herself why she falls for these men with their black-and-white outlooks.

It then flashes back to when she was twelve and first met Stick. They are fighting over a cliff, him beating her severely. She states that to Stick the only thing that mattered is his war. How you either were a success or a failure in his eyes. He tells her she is too angry and that this will get her killed someday. She thinks about her past some more while walking around the city.

She runs into an old friend. They get coffee, talking about the past. She looks out the window to see a former mentor she had when she worked for The Hand. Her name is Aka. She was closer to this mentor more than Stick was because Aka acted as she cared for Elektra. She took Elektra’s trust and ruined her life. Elektra thinks she is trying to get to her, that she is the one who asked for those files from Fisk.

She gets to a forest that was a turning point between her and Mathew. She sees Aka on a cliff. Aka laughs jumping off. It flashes back to her in her younger days when working for The Hand. Aka sent her to target Mathew Murdock to show him the beauty of giving up to The Hand. To lead him to the organization. Elektra fell in love with him though.

She starts to head back to her car, telling herself to let the past die. Mathew needs her back in the city. She starts driving back when she’s suddenly thrown off the road, trying to avoid a deer. Her car crashes down a hill. She looks at her tire to see a dart on them. Thinking it’s Aka, she suits up to look for her. Her foot catches a net that she quickly avoids. She turns to see Kraven The Hunter. He’s on the hunt for a new challenge. He’s on the hunt for Elektra.

The art by Rafael De Latorre is so beautiful! Each landscape, whether a city or a snowy forest is just beautiful to look at. It looks like a painting come to life. He makes Elektra look hauntingly beautiful yet badass. He puts so many details into these characters. The expressions are super expressive and you always see the emotion the characters are trying to portray. The colors are vibrant. I can honestly say this is the best Elektra has ever looked.

As for the writing by Chip Zdarsky, this is some of the best writing for Elektra Natchios. Elektra is a very complex character to write for. Zdarsky does amazing justice to this character. You can just read how much she loves Mathew Murdock. How hard turning over a new leaf is for her. She’s used to the bloodshed and get rid of her problems permanently.

Here she has to do the opposite of what she believes in which makes such an interesting read. I loved reading more of her history, intertwining with the main story. I found both just as engaging! I was super surprised with the ending and can’t wait to read the next issue! I recommend this to all Daredevil fans/ comic book readers to check it out!