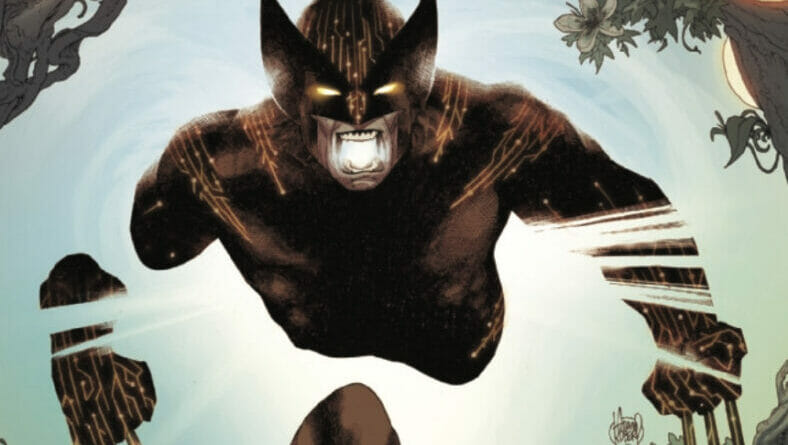 
**WARNING SPOILERS AHEAD FOR X DEATHS OF WOLVERINE #4**

The first point of call, there is a lot of eye and nose gouging in issue #4 of X Deaths of Wolverine. I’m not sure what media the creators were consuming or what was happening in their subconscious but there was a fair bit, and FaceOff type imagery too. Travolta would be proud. The opening pages show Wolverine talking with Forge in the distant future, discussing their only option. A piece of organic tech, that reminds me of the heart of Te Fiti from Moana, is what will help them fix the timeline.

Logan suggests Forge do the honors but Forge then rips out Logan’s eye and shoves the tiny green seed into the empty socket. As sentinels tear off the roof, Wolverine slips away to save the day. When we see Wolverine again, the seed has germinated and started to grow (Jack and the Beanstalk, anyone?). I believe this links back to the first or second issue where Black Tom is consumed by a giant plant.

We cross to the Wolverine gang ambushing Arnad Chaklandar. They storm into the tech rooms and demand information about where Moira has gone. Arnad doesn’t provide it straight away with negative consequences for him. After Wolverine details how each of them dies in gruesome detail, Arnad decides to give up the information as long as he is left alive. Logan agrees, they get the info but then Logan shoves a claw up Arnad’s nostril. Scout thinks he’s been killed but we’re led to believe it was just a microchip.

And then we have—wait for it, ladies and gentlemen—the first indication of a crossover between X Lives of Wolverine and X Deaths of Wolverine! We are sent to the Hatchery in Krakoa where we saw Destiny in the first issue and she is thinking/seeing visions about all of the things that have come to pass between Wolverine and Moira crossing time streams. Everything is rifting and merging over and over, creating branching timelines.

Then to Moira who has killed and stolen Banshee’s face! Um, excuse me? I think this is showing how much she doesn’t care for timelines etc because whatever happens will be destroyed or restarted. Either way, I was definitely taken aback. Moira then explains it was Forge who stole her powers. These last few pages string together in a whirlwind. We have Moira blaming Charles, Charles trying to reason, Forge sneaking up, Moira controlling some sort of bug armor that looks like the cockroach alien Vincent D’Onofrio played in Men in Black, and then kidnapping Destiny.

Moira is definitely out to kill, she is sick of the way she’s been treated throughout time and wants to put an end to it (much to what was shown in the future from issue. Eventually, Wolverine crashes in and strikes Moira through the chest with two fists full of claws. She shoots him and he stumbles back. Calling Destiny for help, Wolverine claims he won’t be able to hold back. Something shifts in him, something is taking over. He stands, “We are Phalanx.”

I’m not entirely sure what to think of this issue. There are still a lot more questions than answers but I suppose we’re slowly getting to the fact that Moira is either anti-hero or villain in this story. Where will it go and what will the culminating results be for the future of X-Men comics? I can’t say right now. I have been loving the inner dialogue of the characters throughout the dual series but X Deaths of Wolverine #4 was lacking in this department. To compensate, we were provided with a bit more of a streamlined story but somehow it still feel choppy. At least it’s consistent and my neck will be stronger for the constant whiplash.

As always, the artwork is spot on. I particularly liked the close-up images this week as they showcased Federico Vicentini’s skills by channeling a range of emotions across all of the characters. My favorite pieces of art in this issue were probably the shock-factor eye-gouging or Banshee’s face being torn off Moira’s like discarded Covid protection. Only two issues left in the dual series. What will happen? Only time will tell (see what I did there?). I’ll see myself out.