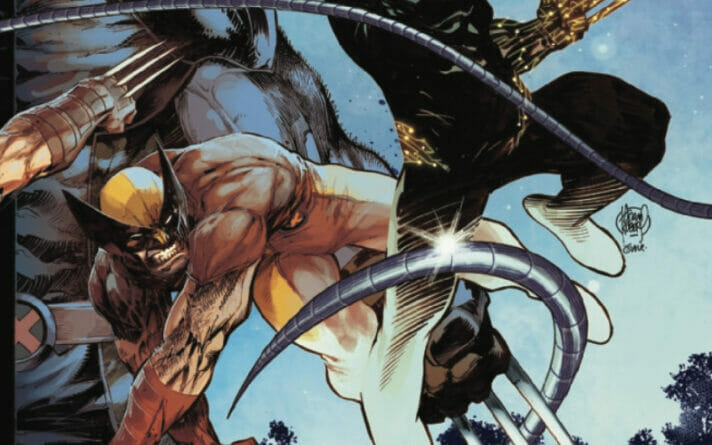 
**WARNING SPOILERS AHEAD FOR X DEATHS OF WOLVERINE #5**

Here we are, the end of the road. The final issue in the X Lives of Wolverine and X Deaths of Wolverine dual-run is upon us. How will the multi-timeline, Moira vs Mutants fiasco come to an end? A bloodied Moira staggers towards Charles Xavier during an Old English Fair and opens the issue with a brilliantly crafted one-liner, “#$%& you, Charles.”

As Moira takes her final breath within the large cockroach battlesuit of the last issue, she curses Charles in distant memory and we become privy to some of the lives she has lived. The full-page art is nicely drawn and it conveys a minute amount of the pain Moira has endured. These split panel spreads have been a constant throughout the series and I have really enjoyed them, so it was nice to have one in the final issue.

We are then thrust into the present as the Wolverine crew tries to chase and stop the Phalanx-poisoned Omega Wolverine. The art is well crafted and it has a T-1000 vibe; just this unstoppable force tore down to the metallic bones but powered on despite the pain. The Wolverines are chatting to Sage and Beast in the Krakoa Cradle, where Omega Wolverine is heading. If he arrives, there’ll be no stopping the Phalanx virus, and Moira’s plan to eradicate mutants will succeed. All of the Wolverine crew—Daken, Scout, X-23—all give it a good shot but the Omega Wolverine is too powerful. Until we hear, “Hey, bub.” Ooh, shivers!

The Logan from the X Lives of Wolverine sequence comes into the fray. And, without spoiling the obvious, a fight ensues. It is really well directed and drawn with wide shots and closeups to convey the ferocity of the battle. The action is interrupted by a black page of text. It details the X Deaths of Wolverine that Omega Wolverine heard about in the 1000 years before his ascension. The deaths of Nightcrawler, Magneto, and Prof Xavier are explained here.

I enjoyed reading about these but felt it was a bit of a copout to have them glossed over. Logan defeats the Omega version of himself with a nanite-infused Cerebro sword passed to him from Sage (she had hacked into it). Logan walks away to drink all the whiskey. Fitting. The final pages see a quick epilogue from Wolverine in text form, ending with “It’s my job to keep watch.”

The crew is drinking in a bar on Krakoa and Beast confides in Sage by saying that sometimes force does win and Wolverine is the best for that because “stabbing $#&% is what saves the world.” And then ten days later, we are transported to a graveyard, a hand pops out of the dirt and Moira is back for her eleventh life—online and ready for vengeance. Again, a very ominous Terminator-esque sequence.

I took a moment after reading to sit back and wonder about the series. I really liked the X Lives component but the X Deaths storyline kind of let it down. Despite characters constantly talking about stakes and dire consequences, I didn’t feel like there was any threat at all. I suppose Moira becoming the antagonist was a surprise but it also felt draining.

Perhaps it’s my fault for not knowing every bit of X-men lore before this but as a new series and reader, maybe I shouldn’t be thrust into random character cameos just for them to save the day. There definitely were a lot of deus ex machina type solutions. Despite the aforementioned failings, I felt that the artwork was superbly drawn and the later issues of X Deaths were definitely more compelling than the first few.

As with most comic book “events”, this seems like it is the inciting incident for a few more storylines across multiple characters and comic runs. Destiny of X is next, followed by Marauders, Knights of X, etc. I haven’t been keeping up to date with the X-men run-up until these reviews so whether the X Deaths/Lives issues intertwine with current stories will remain to be seen.