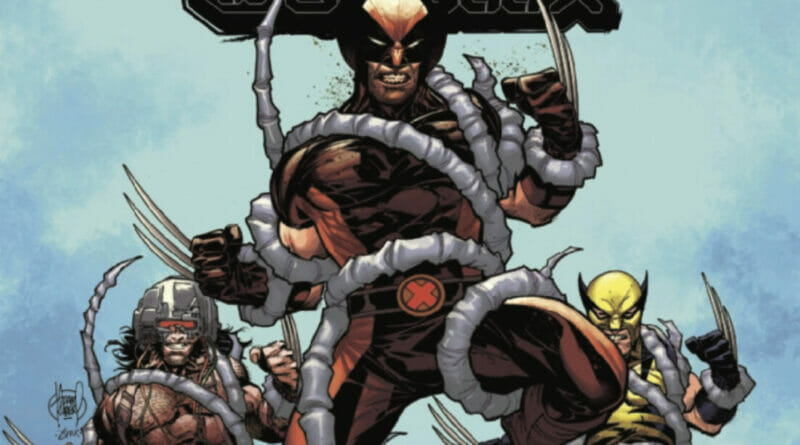 
**The Following Contains Spoilers For X Lives of Wolverine #1**

X Lives of Wolverine first opens to Logan standing on a cliff face with a broken clock and describing his hatred of digital clocks. And, to be honest, I’m with him on this one. I once lauded digital clocks and despised the puzzle I had to solve when looking at an analog but now, I appreciate that puzzle so much more. But, I digress. As Logan looks out at the sunset, he discusses how time is sideways and we get our first glimpse at the potential for this comic. A telepathic speech bubble pops up, “Logan?”

The setting changes to an Old English household (too keen eyes it would look very familiar) where a woman is giving birth, she is addressed as Mrs. Xavier. Suddenly, they’re under attack as a pair of garden shears fly through the air. Logan jumps up and shouts for a gun. And then on the ledge is a groundskeeper, bearing the symbol of a familiar Wolverine villain, gritting his teeth and waving around bony tentacles. Logan is shouting at the other helpers to keep the family safe. He snikts his bone claws.

Again, the setting changes to Krakoa where we see Omega Red searching through a database to determine who (a mystery at this stage) has been lying. The action is interrupted by a full-page case file where X-Force and “The Five” are communicating about Omega Red being resurrected. Curious.

Now we’re back in the room where Mrs. Xavier’s first child is stillborn. Wolverine is trying to fight the possessed help in the Xavier household as the mind of Omega Red swaps between the groundskeeper, servant, and then finally the midwife. Omega Red then begins to talk saying that Logan has changed and that the old one would have killed no matter the outcome. It is obvious Red’s intent is to harm/kill the child and Wolverine is trying to save him.

We are shown a flashback of Logan walking into what looks like a makeshift Cerebro and Jean Grey is there. Logan lies on the table akin to the Animus in Assassin’s Creed, and we are shown fragments of his most famous battles in life (Weapon X, vs Hulk, Lady Deathstrike, Silver Samurai, etc)—it is truly a brilliant splash page. There is another interruption of Omega Red traveling to Moscow and a case file from the Kremlin that states there will now be two presidents—one for the people and one for mutants. Mikhail Rasputin is named and shown.

The battle continues in the Xavier household until the midwife is killed while possessed by Omega Red, effectively snapping the connection. Wolverine cuts the umbilical cord with a claw (nice touch) and says, “It’s all right, Chuck. I got you.” Confirming what we came to understand is that the baby is a young Charles Xavier. The final pages are shown as Wolverine is fling into the midst of a war in Columbia with Sabretooth. A projection of Jean Grey is shown and she states within a telepathic speech bubble, “You have to save Xavier. The clock is ticking.” A nice link to the starting panel.

I really thought the writing of Benjamin Percy was spot on. I love getting into the many different facets of Wolverine. He is such a beast but also so thoughtful and deep. So I am looking forward to the continuing characterization as we move forward with a Logan who is older and wiser within familiar settings where he once may have not been so astute.

Although the casefile interruptions were interesting, they were just that—an interruption. I felt like things were flying well and then BAM I’m trying to decipher who the Beast is talking to etc. It’s different, and I appreciate that so I’m not going to say it’s a bad thing but I hope it has a really solid payoff throughout and towards the end of the series. You may have also noticed in my recap above that there was a lot of chopping between settings. It too is a bit jarring at first but, such is the nature of a tale told in time travel.

The artwork of Joshua Cassara and the colors by Frank Martin were also quite intuitive and immersive. You get a sense of sadness and frustration from those that are possessed, an overwhelming acknowledgment of power from Omega Red, and then all of the fury and excitement that you expect from a Wolverine in full fight mode (when he first pops his claws is quite something “Try me” ooh shivers!). And the electric/brainwave patterns with Cerebro are nice too. Like I said before, the double spread page is astounding.

There is an intentional mystery element to this series and I, for one, am all for it! Bring on the remaining issues. The X Lives of Wolverine and X Deaths of Wolverine are twin 5-issue series that is planned to be woven together as a weekly 10-part set.