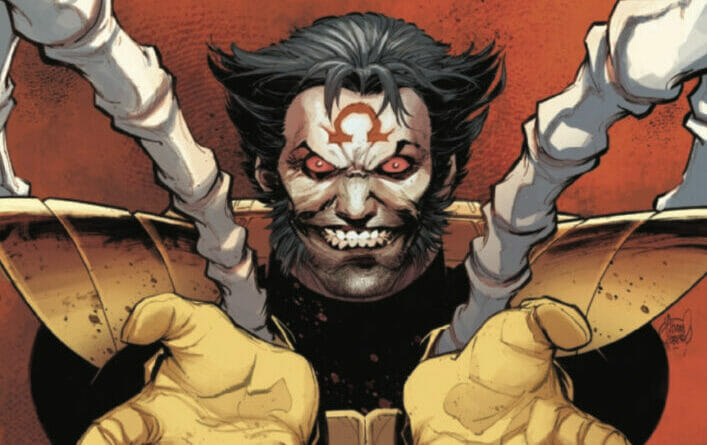 
**WARNING SPOILERS AHEAD FOR X LIVES OF WOLVERINE #4**

For previous X Lives of Wolverine/X Deaths of Wolverine recaps and reviews, head here. The comic opens to a sight known by many, even if you’re not a fan of Wolverine—the Weapon X facility. With Logan on the operating table and a multitude of cables and tubes attached, Dr. Cornerlius talks him through the process except there seems to be something wrong with his blood, a black parasite. I have a sneaking suspicion of what it is; however, I’ll wait so as not to ruin the fun.

Then there’s a glimmer and Xavier starts to talk to the doctor, trying to reason with him, warn him of what may come. But, it’s too late, Dr. Cornelius has been possessed by Omega Red and he states, “they can’t send a weapon if it never made it off the factory floor”. Leaving us with the image of Logan being electrocuted on the operating table.

After the opening credit pages, we are sent to a place in Wolverine’s history that I’ve been waiting for and, no, it isn’t the Wild West, it’s 1945, Japan. A Japanese fighter pilot has been Omega possessed and is heading towards a US Naval ship, where a Lieutenant Xavier (Charles’s father) is manning the binoculars. Three Japanese fighter planes are coming in but… there’s a fourth plane!? It’s Canadian! Logan is at the helm.

The comic is interrupted with a casefile Psychic Conversation transcript between Jean Grey and Charles Xavier. The dialogue is very Xavier-esque but really made me think about how all of our choices and any number of decisions are variables leading us to the results we get on a daily basis. It’s hard to explain succinctly without showing you the whole conversation but the gist is that Xavier instructs Jean to ensure any people within the altered timelines have their memories wiped.

Now back in Columbia, Omega-Wolverine almost succeeds in assassinating Charles Xavier but Sabretooth unknowingly saves the day. This page is the best drawn so far in this issue. The ferocity of Sabretooth is so visually obvious that you forget for a moment that Wolverine is the protagonist here albeit possessed by the overall antagonist. Then I turn to see a full-page spread, close up of Sabretooth and Wolverine—wow. Spittle and blood fly across the scene as the bone tentacles wrap around Sabretooth’s neck.

The next few pages flick quickly, and sometimes panel-by-panel, between time periods and settings so I’ll try my best to keep it ordered. But the most poignant is when we’re back in the Weapon X Facility, we see Omega-Cornelius conducting a villain-about-to-be-victorious speech; however, Wolverine emerges from the tank and on the next page we get a full spread of Symbiote-Omega-Wolverine in all its terrifying glory. The tendrils reach from the body and as well as Wolverine’s claws popping, you have the teeth and tongue of a symbiote vying for power.

As we turn the pages, we see the battles and action between Wolverine, Omega Red, Sabretooth, a symbiote, a Japanese bomber, Dr. Cornelius, and finally, Logan’s mind. As he narrates the final pages, discussing how his memories fade and alter, always focusing on the bad, we see some very impressive art. Each panel and setting is stylistically a little different, whether it’s the wide blue sky and oceans of 1945, the yellow tinge in the Columbian jungle, or the pink and purple haze amidst a scientific testing facility, you are privy to each emotion and feeling of guilt, hatred, and pain.

Each step in Wolverine’s past links to the next, much like Jean and Xavier’s conversation alluded to. But he is always in pain with those memories. There is a striking electrical montage as Logan comes to this realization. The final two pages show Jean Grey and Charles Xavier struggling to locate and contact Wolverine in the past. After Omega Red possessed Logan in Columbia, Sabretooth murdered him and, therefore, severed the contact via Cerebro. But Charles feels something else, an energy pulling, contacting him. “Greetings from Russia…” as we see a side-by-side of Mikail Rasputin, Omega Red, and the Cerebro sword alongside Wolverine stabbing Charles in the chest.

Benjamin Percy once again takes on the challenge of flipping between timelines and settings throughout Wolverine’s complex history. In this issue, Percy even adds in some lesser-known components of Logan’s past from the Web of Venom series. This addition took me off guard as I am unfamiliar with that run, so I felt it was a little shoehorned in but if the Wolverine-symbiote contracted from Vietnam is considered canon then who am I to argue? The strength of Percy’s writing, in the X Lives series at least, lies within his ability to get inside Logan’s psyche. While the dialogue is important, I feel the narration and innermost thoughts are integral to the story and character as a whole.

Once again, Joshua Cassara’s art is phenomenal. I mentioned in the recap that the last few pages are separated by three different timelines. This is evident, of course, through the characters, but, more importantly, via the color schemes and slight artistic license Cassara uses to inform us of the change of time and place. The full-page spreads are always full of life and emotion, and this continues in X Lives of Wolverine #4.

There are only 3 issues left within the X Lives and X Deaths dual-series. I once thought they would crossover but as we move on, my hopes are dwindling, I just hope we get strong answers at the end. How will the events of Moira in the future link with Wolverine being possessed by Omega Red? Who knows if they will link at all? I think the X Lives run has been my favorite so far and, although it may not be required reading (note to self to come back here in fifty years if I’m wrong and edit) as we move through comic book history, it has been a very fun and nostalgic read thus far.