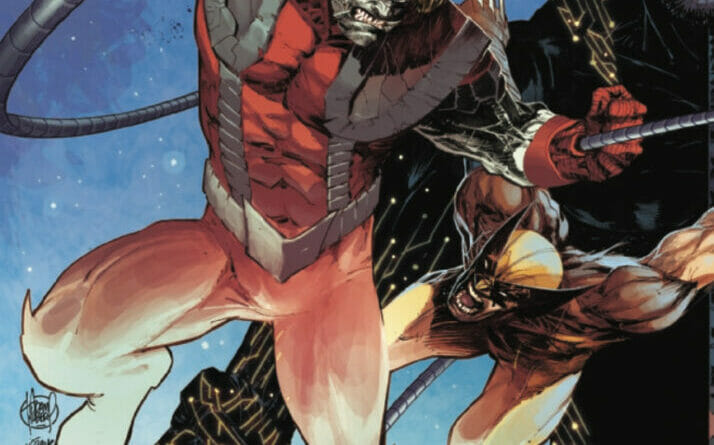 
*Spoilers Ahead For the Entire Run of X Lives of Wolverine*

The cover is special. A domineering Omega Red is mid-battle with a smaller Wolverine, set against the silhouetted backdrop of Russia alongside a Phalanx-Wolverine. This is the first instance of his existence within the X Lives series so perhaps we’re getting some crossover—as I’ve been craving!

I thought the cover was good. But the first page. Ooh, what a sight. It is separated into tiny headshots of Logan throughout history. Weapon X. Various wars. Old Man Logan. Patch. That Wild West version I’m waiting for. And in the foreground is where we left off: Omega Wolverine, choking and stabbing Xavier from the Cerebro bed in Krakoa. Jean Grey and Xavier launch into the depths of Wolverine’s mind to find where he is hiding.

We go back to 1900 Northern Canada. Young Logan and Old Man Xavier are having a chat after their ordeal from the Omega Moby Dick. Benedict Xavier is trying to convince Logan to stay on and work with him, which Logan continues to turn down. And then, before Logan jumps into the ocean and swims to the shore while Charles Xavier tries to contact him, Benedict Xavier hands Logan a watch. The very same watch from the opening scenes of Issue One. Aww, my heart.

And then BOOM Wolverine claws his way back into his own head. And he knows where Omega red is hiding out. He also scores a smack on the kisser from Jean. We get a brief interruption from a Mission Log. These showcase two distinct instances that we don’t see drawn. Firstly, the “Wild West” I’ve been wanting was Logan fur-trapping in Colorado. And the second was during WW1 when Omega Red sent a German tank after Aline Fischer (the great-grandmother of Charles Xavier). These are two that I may have liked to have witnessed, or maybe just as quick snippets in a fly-by panel sequence.

Next, we’re in Russia as Omega Red pulls out the Cerebro Sword to Mikhail Rasputin’s dissatisfaction. Omega has failed. Arkady is just a tool in a greater arsenal. Mikhail warps away with a wider army, leaving Arkady alone in the snow. Wolverine then shows up via the help from Gateway (woo Australian mutant represent!), and he’s here to fight. And fight they do!

The fight is expertly drawn. As the ferocity flows on the page, we are shown glimpses of old fights in Wolverine’s history. All of it is narrated by Wolverine and some profound words about memories, repetition, and trying to rekindle the electricity of an experience. I wanted to share every single page of the fight but, other than copyright issues, I’d really love you to experience the images yourself. But, if you’re reading this then you’re probably wanting spoilers anyway: Wolverine is victorious. In a bloody swipe of his claws, Wolverine slices Omega Red in half, blood seeping into the snow.

The issue ends with Logan returning the Cerebro sword and ready for a nap but he is told he can’t rest yet because the island of Krakoa is under attack… by Wolverine. We get an awesome full-page spread here of Phalanx Wolverine fighting Daken, Scout, and X-23 while Moira MacTaggert lies on the ground. Ironically linking to Wolverine’s words only a few pages earlier: Only thing you control is the ending.

As I have stated through the entirety of these reviews, I really think the X Lives issues have been stronger, and this issue solidifies it. The artwork by Joshua Cassara is beautifully stylized and brings beautiful brutality to the page. Benjamin Percy, as I’ve said multiple times, has really delved deep into the softer and more thoughtful side of James Howlett, and I love it.

During this issue, Mikhail and Omega Red state that they’ve had all the time in the world for their mission, and it really is the first time that I had stopped to think and understand the task at hand. Omega and Wolverine have been fighting through time and the comic conveys this through panels of split-second increments, where in fact each event could be days, weeks, months of fighting throughout time.

I know I have a role as a reader to put those things together but I wish this was something that was communicated more clearly earlier in the issue run, or somehow expressed differently so I could fathom the immensity of the task. Finally, some crossover and time placement for both stories. I am predicting a Wolverine vs Wolverine face-off in the final issue of X Deaths. And, I’m here for it. Pass the popcorn.