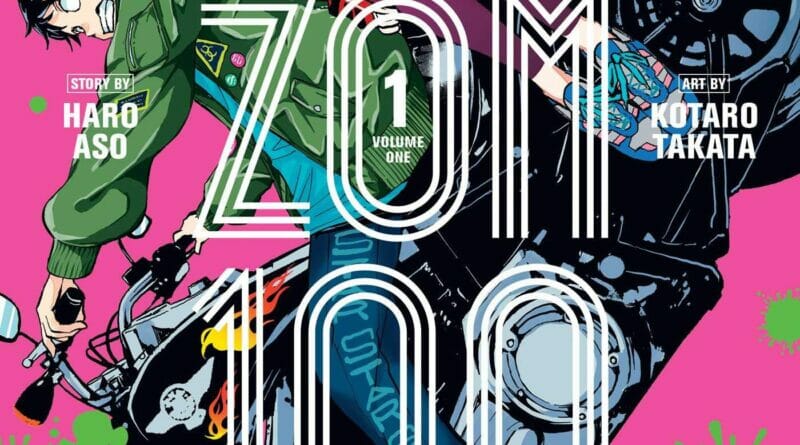 Zom 100: Bucket List of the Dead Vol. 1- The Zombie Apocalypse Doesn’t Get Better Than This (Manga Review)


Zom 100: Bucket List of the Dead Vol. 1 Delivers On All Facets of It’s Story Giving a Thrilling Ride While Fully Embracing The Madness of a Zombie Apocalypse

Zom 100: Bucket List of the Dead is everyone’s dream scenario. I hope the world ends so I don’t have to go to my sh** job for like forever. We’ve all been there and to some degree or another, we’ve all wished our workplace would burn to the ground so we don’t have to deal with the stress and the corporate exploitation of the modern worker. Zom 100 follows 24-year-old Akira who’s become what many in today’s society would consider a modern-day slave.

Akira works at an animation studio, his dream job. He quickly realizes that his dream job is not all it’s cut out to be. From working long hours, working double overtime (unpaid overtime), not getting enough sleep, and not having enough free time to enjoy a semblance of normalcy in his social life. Akira has spun into a downward spiral of self-loathing and growing hate for his dream job.

One random day Akira wakes up for work and realizes that the world has gone to sh** and is now in the middle of a zombie apocalypse. While he freaks out about being dead smack in the middle of this new horrific, zombified world, the only thing that brings him any joy in all this is that he no longer has to work. He has been set free from the shackles of his exploitative corporate job. This is something anyone who works a job they hate can totally relate to.

During his early days at his new job Akira took a liking to a coworker who turned out to be his boss’s side piece. Despite that, and despite the situation he found himself in, Akira takes it upon himself to visit the girl he likes at her apartment to confess his love for her. Sadly that encounter turns out to a deadly one as both his boss and his crush are ravaging zombies.

The great thing about this specific moment in the manga is that despite all the circumstances, Akira does what anyone who has an annoying boss wants to do….tackle them through a damn door to get all of that pent-up anger out of their system. Granted the boss had it coming since he was a total ass for lack of a better word. In the midst of it all, he also confesses his love to his work crush who’s casually chilling in her lingerie. Who knew zombies could be attractive…am I right?

After being chased by his crush and a horde of zombies, Akira finds his way back home and after a massive Spring cleaning session, he decides it’s time to kick back, binge some tv, and knock back a few beers. Totally understandable and totally relatable. It’s probably the best mentality to have during a zombie apocalypse if I do say so myself.

Realizing he’s run out of beer, Akira sets off on a beer run and runs into a girl who is also out on a supply run. He tries to awkwardly court the girl but is rejected on the basis that he risked his life during a zombie apocalypse for a case of beer. She thought that was beneath her. But then proceeds to steal his bike in the process.

But here’s the great thing about Zom 100, it’s not the horde of zombies and the horror undertones. It’s the relatability and humanity of Akira and his ability to make the best out of a rather dire situation. Despite all he’s dealt with in the three years at his job, life has managed to find a way to set him free. Albeit the situation itself is rather uncalled for but its the sense of being free and no longer being shackled to a corporation is something that really resonates in the first volume of this story.

After this realization, Akira sets a goal of writing up a bucket list of 100 things he wants to do before becoming a zombie. After getting those initial, instinctive desires out of the way he realizes that there’s some things he needs to add to that bucket list. More meaningful things. And this is a moment in Zom 100 that really resonated with me.

Yes, we want to do all the fun stuff we weren’t able to do due to the fact we got so tied up with work and worked insane amount of hours just to get by. But what often passes us by during our adult years is time and the time we primarily spend working like a slave which in turn takes away from us not thoroughly enjoying our youth, and also in the process forcing us to miss spending time with our friends and family or not fully pursuing a romantic relationship because work is more important and that point and time.

This specific moment is what really started cementing my enjoyment of Zom 100 because it’s something we can all relate to. After realizing this himself, Akira sets off on a quest to find his best friend Kencho. Who’s out there somewhere in the middle of Shinjuku. After a brief search, Akira finds Kencho hiding out in a hotel. Akira tries to apologize to Kencho for not listening to his advice and not quitting his job while he could. The two friends end up running away from a horde of zombies and end up having to jump off of a roof to escape the horde.

The two come to the realization that there was always more to their lives than working like a slave or in Kencho’s case, there was much more to life than traveling, big corporate parties and dating women. Despite having all that success, Kencho never felt whole and him talking all that big game to Akira was just to rub his own ego in order to feel fulfilled. Kencho and Akira then knock back some beers and have a good laugh, which is something Akira wrote down on his bucket list and was able to scratch off.

The two come to the realization that there was always more to their lives than working like a slave or in Kencho’s case, there was much more to life than traveling, big corporate parties, and dating women. Despite having all that success, Kencho never felt whole and him talking all that big game to Akira was just to rub his own ego in order to feel fulfilled. Kencho and Akira then knock back some beers and have a good laugh, which is something Akira wrote down on his bucket list and was able to scratch off.

On the surface level, Zom 100 seems like a typical apocalyptic zombie horror story but there’s so much heart and humanity in this story, as well as relatability. The artwork by Kotaro Takata just amplifies the story being told by Haro Aso and the world we are being presented with. We get a bonus, partial chapter at the end of this volume which is a switch of perspectives as it switches to Shizuka Mikazuki’s perspective of the zombie apocalypse and her moments leading up to her encounter with Akira.

Zom 100: Bucket List of the Dead Vol. 1 written by Haro Aso with art by Kotaro Takata is available now wherever books are sold and on VizMedia.com