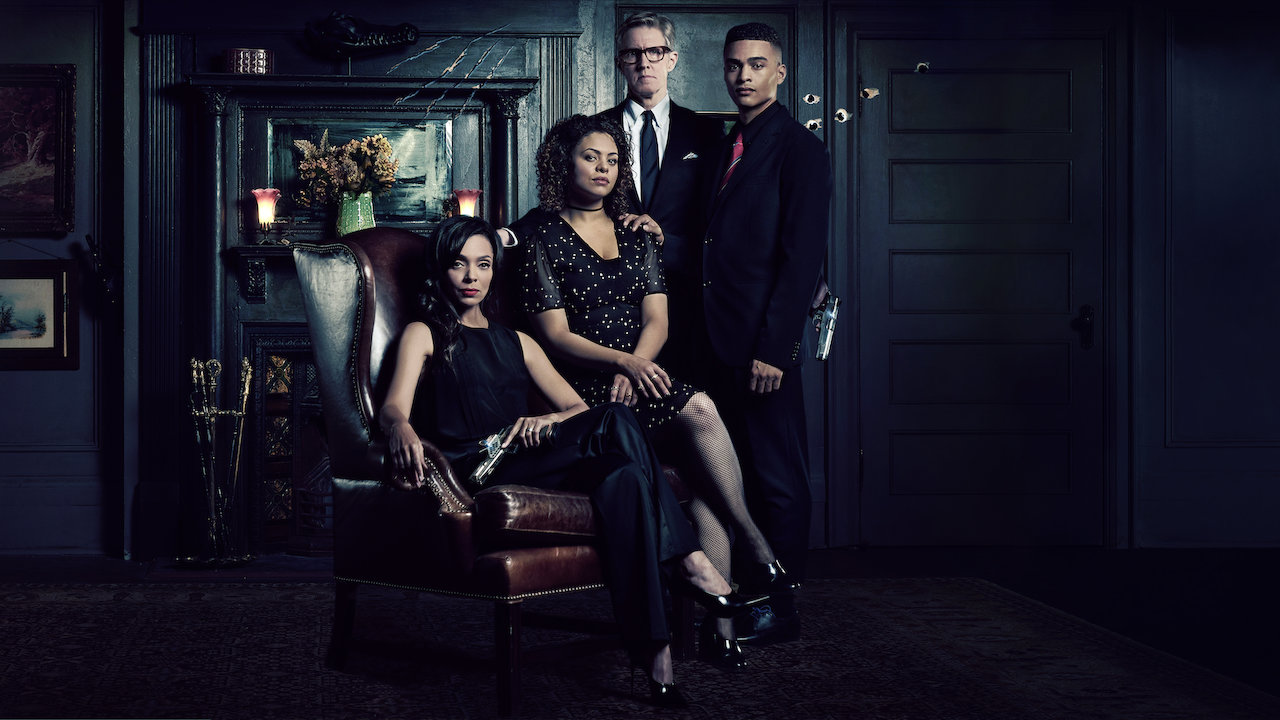 
October Faction just premiered on Netflix and as part of our feature coverage, we were able to sit down with one of the lead cast members, J.C. MacKenzie to discuss a few things about the series. Sit back as we discuss everything we can discuss regarding October Faction (without any spoilers), The Irishman and much more! Enjoy!

Q: What attracted you to the series?

J.C. MacKenzie: Well working with Damian Kindler was one. I knew Damian through a colleague of mine that I’ve worked with named Charles Eglee who did Dexter and The Shield and Murder One. He was one of the regular guys who always cast me all the time. I was down in North Carolina vacationing, Chip called me up and said: “I suggest you for the lead in this new series a friend of mine is doing [Damian Kindler], called October Faction”. I said “thanks!”. I didn’t think anything of it.

He said he would set up a call, so we set up a call. We had seven subsequent conversations about the character. He said: “do you mind putting yourself on camera and auditioning?”. I put myself on camera for seven scenes. They were receiving a little pushback from Netflix because I’m not a massive star, so he said, “can you get a letter of recommendation from Martin Scorsese and Aaron Sorkin?” who I’ve worked with a couple of times as well.

I said “I don’t think so. I mean how am I going to do that?”. They said, “just ask.”. So I asked and I got a glowing, glowing letter from the both of them! I don’t care if they didn’t write it, it was very nice. And the next day, I got word from Netflix that they were pulling the trigger and I’m the guy. That’s how all of that transpired.

Q: I know you recently worked with Scorsese on Netflix’s The Irishman, correct?

Q: The film received a ton of Oscar nominations, how do you feel about that?

J.C. MacKenzie: It’s always great you know, you get an Oscar nomination…I think I’ve been in four films and every one has gotten an Oscar nomination. Not that I expect it, but it’s always nice and there’s a degree of attention paid to the film. Even though you have a smaller part in the film…because it’s special, it’s directed by Scorsese, who’s 78. I don’t know for however long this is going to go on for, however his health holds up.

Not only that, with this particular piece you’ve got. These titans of cinema, American Cinema that have dominated the screen for 50-60 years. With Scorsese and Robert De Niro and Al Pacino and Joe Pesci and Harvey Keitel, these guys aren’t going to be around together, doing stuff for that much longer. Not that they’re going to die, but to get them all together in one room to do one thing, I think its kind of special. And to be apart of it for me, in any small way, it’s just an honor.

Q: Back to October Faction, you play Fred Allen, one of the lead stars of the show. What can you tell me about his relationship with his father? Because it seems like he’s [Fred Allen] having some internal struggles due to his past, which also ties into his brother. What is it about that dynamic and how does it play into the overall season?

J.C. MacKenzie: Well there’s a lot that plays into that and it’s all internal and it’s not really said, it’s suggested in this series. But that’s the motor that drives Fred all throughout, probably throughout all of his adult life. It’s this relationship that he has with his very compromised and complicated father. Who is head of this secret organization that he works for called Presidio.

The piece is interesting to me because it’s not only a supernatural thriller, but it’s a character-driven family drama that’s about family, marriage, homophobia, and racism. We move back into this small town that we were raised in (we were high school sweethearts) and the kids are dealing with — these kids are world-class kids they’ve been all over the world, who are dealing with racism and homophobia for the first time in this small community in upstate New York so it’s many things.

The monsters in this piece are a metaphor for the xenomorphic paranoia of the other that we see so prominently in the United States with the Trump Administration and it deals with the things that history has done to people over the institution in order to maintain power. I’m talking specifically about the organization I just mentioned Presidio. So it’s a lot of different levels. Its got humor, its got a smalltown horror feel to it alas Stephen King, and it’s got special effects so it’s something I’ve never really been involved with this heavily.

The last thing I did was Hemlock Grove, I played the Devil which was interesting too. There’s a lot of special effects stuff you don’t know if it’s gonna work until you see the final product. Until you see how much money is thrown into it, and they’ve thrown quite a bit amount of money into this so we’ll see how it pans out. It’s always an interesting point to be in at this juncture. You don’t always know if it’s gonna get eyes. Or if people are going to tune in, will it be a hit? If people don’t, then it won’t.

You know for me I’ve been involved in all sorts of things that were sure-fire bets. The last of which was a series on HBO called Vinyl, executive produced and directed by Martin Scorsese and Mick Jagger, about the 1970s Rock n’ Roll scene. I had friends telling me the series would go on for seven years and it went on for one year and it was canceled, so you never know.

TNB: Yeah, you really never know. I for one was not fully aware of this series until IDW Entertainment reached out to me asking me to cover it. I was like sure! So I did a little research, Netflix sent me over the first episode which I watched twice now and I’m locked in and can’t wait to see the rest of it.

Q: Let’s talk more about Presidio. Without giving too much away, we know that Presidio is the family’s business, which is something the kids don’t know [about]. But it is something you and your wife [Dolores] are aware of, how does that affect the family dynamic as those layers start to peel back throughout the season?

J.C. MacKenzie: Well those are the hurdles that we have to go through throughout the first season. Hiding our identity and where we’re going and who we are dealing with, while telling the kids we sell Risk Assessment Insurance, which seems a little sketchy. We seem to be rather high-end Risk Assessment Insurance people. And we’re traveling all over the world and seeing different places and the kids seem to just go along with it.

As the series goes on they kinda get it, but they have their own secrets, that I’m not allowed to divulge. There’s a lot of secrets in the series and sorta plays into — we all have secrets in families and generally, they don’t play out that well. I’ve known and have worked for Presidio for many years, in fact, they want me to become head of Presidio. My father was head Presidio, his father before him was head of Presidio; but they’re ethically compromised and a dubious organization at best.

Q: October Faction is the name of the series and also the organization within the series, what is it about October that draws out Presidio to handle that specific month on a yearly basis?

J.C. MacKenzie: October seems to be some sort of mythical month that attracts mayhem and chaos and you hear Fred in that one clip of the pilot “I hate October” and there’s a reason for that. Because you know, the s*** usually hits the fan in October for whatever reason. So it’s both a comical line and reality. Everyone keeps saying “why is a series called October Faction not being released in October?”.

I think they originally wanted to release it in October but since they have this other show [The Politician] releasing in October, they didn’t want to have October Faction buried. But it’s released in January and I think it’s a good time to open up. It’s a new year, a new decade…

TNB: That was also one of my initial thoughts when I read the title of the series. I’m like “hmm, it’s weird that they’re releasing a show with October in its title in January”, but its something new, fresh, different. Most shows that are within the sci-fi/horror genre tend to release in the Fall. So starting off the new year with something like this. I think it’s something bold, new and innovative, that’ll probably help future projects like these in the long run.

J.C. MacKenzie: Hey let me tell you, it was something big for us. The show takes place in October. We were shooting in late November and late December it was -27 degrees and we were shooting in Fall clothing. Shooting outside in the woods, during November of 2018. It was -27 degrees it was insane, and we have to speak dialogue and after about four hours in the cold, you seem like you’re paralyzed. I mean, you can’t even get words out of your mouth, so it was challenging in that sense.

Providing, of course, we come back for a second season, it will be shot in the Spring which will be much nicer.

J.C. was such a pleasure to talk to and we can only hope to do it again. We want to send out a huge thank you to J.C. Mackenzie for taking time out of his day to speak with The Nerdy Basement. We want to thank Netflix, IDW Publishing and IDW Entertainment for making this interview possible.