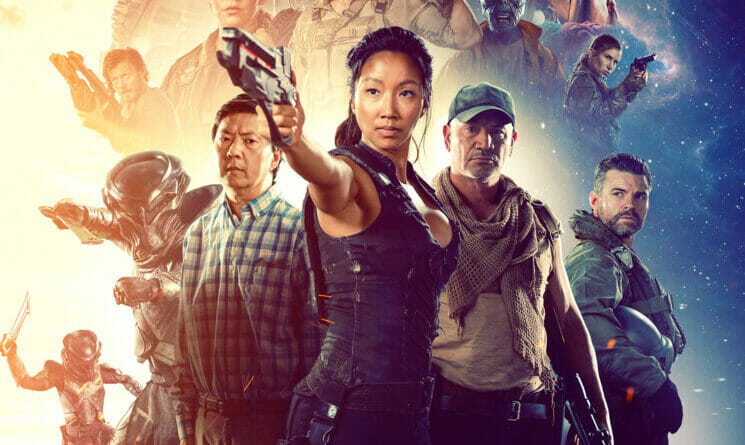 
‘Occupation: Rainfall’ writer/director Luke Sparke chats with The Nerdy Basement About the Film

‘RAINFALL’ picks up two years into an intergalactic invasion of Earth where survivors in Sydney, Australia are fighting back in a desperate ground war. As casualties mount by the day, the resistance and their unexpected allies uncover a plot that could see the war come to a decisive end. With the alien invaders hell-bent on making Earth their new home, the race is on to save mankind.

In our chat with Luke Sparke, we discussed his creative process behind the film, what inspired the franchise’s story and the universe within it, his most daunting task as the helmer of this film, and his plans for the sequel, which were teased by the end of this film. Check it out below!

The Nerdy Basement: Let’s start with the most basic of questions, for those unfamiliar with you or your work, let us know about yourself.

Luke Sparke: I’ve worked in the entertainment industry all my life, mainly behind the camera in costume, props, historic military films, TV, and live entertainment. I was fortunate to work on HBO shows like ‘The Pacific’, X-men with Hugh Jackman, and more. As I took all that work as a big apprenticeship toward making my own films, I learnt valuable lessons along the way. In 2014 I started making my own films, which led to 2018’s OCCUPATION.

The Nerdy Basement: Let’s talk about Occupation: Rainfall, what inspired you to create this story?

Luke Sparke: I was editing my alien invasion film, Occupation, and I was certain it was just a one-and-done film. But while I was editing certain scenes, regarding the aliens’ interactions with humans and the history of colonization, I started having ideas on continuing these themes in this story and what would this world look like 2 years or so down the road. So I got writing the further stories of these characters, with a big emphasis on the aliens and how they are joining with the humans.

The Nerdy Basement: There are a lot of nods and references to previous sci-fi, action-driven stories, I got hints Predator, Terminator, the list goes on; tell us about that aspect of the creative process without the film feeling derivative?

Luke Sparke: It’s hard not to be influenced growing up in the ’80s with the masters like Spielberg, Lucas, Cameron, McTiernan coming at you. It’s in my blood so to speak, so sometimes I might not even know it’s a direct nod – but sometimes I do. It’s a fine line with a film like this to keep it fresh and also give people what they expect. We had a few cuts of the film with different parts that some test audiences didn’t like because ‘they had never seen that before in sci/fi’ and reacted negatively to it. So it’s a matter of keep walking that tightrope of what has come before and what I’m setting out to do.

The Nerdy Basement: You have a star-studded cast here, how was the casting process for this film? What made you and the creative team go for the likes of Temuera Morrison, Ken Jeong, Daniel Gillies, and others?

Daniel Gillies just fit the Wing Commander role and we spoke on the phone and he just ‘got it’ of what was needed for the character. He really went deep with it and helped shape the dialogue of ‘Hayes’.

Ken [Jeong] also got what his role was and pitched to me on the phone what he was thinking, and we ran with it.

The Nerdy Basement: Ken Jeong’s character and his alien buddy Steven have an interesting dynamic and bring much of the film’s comedic relief. Can you tell us more about this relationship?

Luke Sparke: Their role was set out to add some comedy into the film, kinda like a wizard of oz – the heroes are on this journey to discover ‘Rainfall’ and when they get there behind the curtain there are these two squabbling oddballs. You’ll see more of Steve for sure…

The Nerdy Basement: Right from the start of the film you set the overall tone and what the viewer can expect from this alien threat. Let’s talk about that for a little and your thoughts on wanting to waste little to no time in immersion the viewer on this journey.

Luke Sparke: Exactly. Even though it’s in the same franchise as Occupation, I wanted this to be its own thing and not needed to watch the first film. This is the first in my RAINFALL story. And the invasion has happened and the fighting continues. In early script versions, it was a bit slower start but as the edit is refined you start moving scenes around and get it tighter and more action-orientated, and it works for this. The first 20 minutes is the big, large action set piece I always imagined. Then it gets into finding the rainfall storyline. I love the first 20 minutes of this.

The Nerdy Basement: You wear many hats on this project, from directing, writing, producing, and supervising VFX. Which of these were the more daunting task and which were the more pleasant ones?

Luke Sparke: Producing is a daunting task. Like putting together a huge puzzle with no box lid to go off after spilling it over the floor. And hearing all these different hats, I have to come at it from 3 different perspectives and fight myself over some choices. Editing is my favorite part because it’s the final draft of your work and you get to shape it and mold it into something you may not even have thought of.

The Nerdy Basement: To further expand on a previous question, let’s talk about the alien species we meet in this film, The Greys. What more can you tell us about them, outside of what was revealed to us during the film?

The Nerdy Basement: It’s fun creating worlds. I love world-building and it’s something that is very important to me every day from writing right through to VFX work. In this film, I was really nailing down the aliens and the backstory to everything involving them. I don’t want to reveal too much, because there’s more story to tell and more to be revealed. There’s a graphic novel that I’m writing as well based on Rainfall, which will tell more of their story. There’s not just the ‘grey’s like Gary, I got to develop more species in this film. How they fit into society will also be touched on soon.

The Nerdy Basement: How much of their alien design was practical as opposed to VFX, and what inspired their respective designs?

Luke Sparke: Gary and Steve were, for the most part, practical on set. Then augmented by VFX in post to help bring them to life. The other aliens were mainly VFX with a little on-set prac. I got to come up with some pretty cool designs, I think my favorite is a blink and you’ll miss him little alien with 4 arms.

The Nerdy Basement: The ending of the film perfectly sets up a sequel, are there any new developments on that film?

Luke Sparke: We are in early pre-production with eyes to film in the 2nd half of the year. The casting process is underway with new characters, new aliens, and new situations the heroes find themselves…

The Nerdy Basement: We’ll wrap this up with a few fun but interesting questions. Which scene was the most difficult to shoot and why?

Luke Sparke: The scene with the spider monster. That scene man… it was one of the first we filmed and it was the last scene to finish post-work. Just a huge sequence with lots of moving parts.

The Nerdy Basement: What is your favorite sci-fi film or tv and why?

Luke Sparke: Star Wars is going to be an obvious answer. I Love Battlestar Galactica (2000’s version) as well as Starship Troopers.

The Nerdy Basement: Are there any other projects you are working on outside of Occupation: Rainfall’s sequel?

Luke Sparke: Working on a Dinosaur film based on the book ‘Primitive War’. And a WW2 time travel project based on the best selling book ‘Weapons of Choice’. And some smaller films that aren’t announced yet.

‘OCCUPATION: RAINFALL’ is streaming now on all major streaming platforms and VOD.