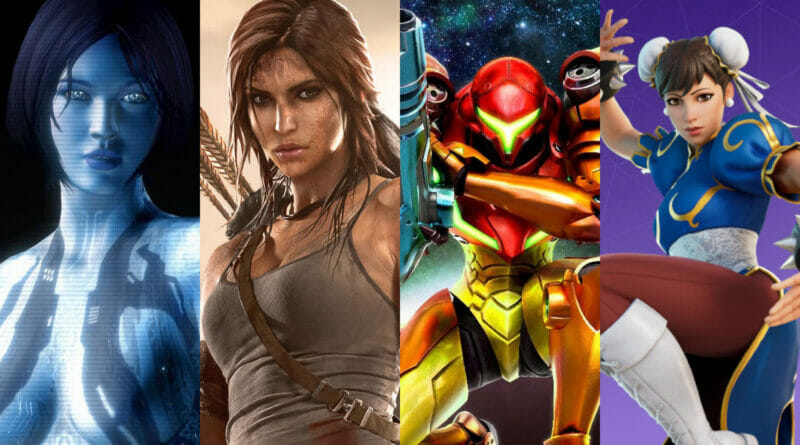 Video games have come a long way since 1958, and even further since our first female-led video game in 1982: Ms. Pac-Man. We have been blessed with amazing females in this world, either playable and NPC’s, though this list is small, it is not ignoring the others or how far they have come.

Lara Croft from Tomb Raider matured beautifully since its official release in 1996. She has had two of her own movies and she has deserved every update and remake to make her even more badass. First, she was developed as a more sex icon but was quickly shut down by female developers for the game. Lara is intelligent, strong, and thirsts for adventure; also an archaeologist, treasure hunter, and tomb raider. Although born to an aristocratic family and with no real traumatic childhood, Lara didn’t feel like she belonged in the upper-class society, finding it stifling and boring.

Her love is in delving into the secrets of the past and finding what is believed to not even exist. Lara often finds herself racing against time to find relics before others do to use them as weapons against the world. In other words, she has saved the world a couple of times over against religious cults, crazy scientists, and even gods. She takes things into her own hands because she knows she can trust herself and won’t abuse the artifacts and relics she discovers. She knows her way around weapons and hand-to-hand combat to help her in a variety of situations.

Samus Aran from the Metroid franchise is a strong intergalactic bounty hunter who worked for the Federation Police and often worked in helping capture certain criminals and accomplishes missions others thought impossible to complete. She had a tragic loss as a child when she lost her parents during a space pirate raid. She was then adopted by an alien who then infused her DNA with their species to become a great warrior. It’s funny how at first some people thought that Samus was male due to her high-powered suit, and she kept on her helmet most of the time, only taking it off at the end of the game.

She wasn’t given much of a personality because the makers wanted the players to imagine themselves as Samus. But in fewer words, she was a loner, a woman of few words. Though quiet, she is a champion of the helpless and downtrodden and shows compassion to those who need it. Her last game was released in 2017, but I hope to see more of her story in the future and hopefully a more developed personality and maybe even a more developed video game system to show her world more vividly.

Evie Frye, older twin of Jacob Frye, as a part of the Assassins Creed franchise is careful, methodical, and cunning Master Assassin. She takes her role as an assassin seriously and does it all to help liberate London from Templar control. She took her studies of the history of the Brotherhood seriously. She loved her brother, but he took a more brute force way into missions and lacked the crafty part of being an assassin. “If none can match my skill, it is only because I’ve out-planned, out-smarted the rest.”

And her being labeled as a Master Assassin, she has the right to know she has outdone the enemy and her partners. Evie is a master at sneaking around and excelled at masking her presence, to such an extent that guards were unable to notice her as long as she remained still. Evie’s stealthy nature led her to prefer more subtle tools like her beautiful cane-sword and throwing knives.

She was especially proficient with the latter, being able to carry a larger amount and hit targets at a greater range than her brother, who favored brass knuckles and firearms. I love and respect her as a great assassin, and was one of the franchise’s first female protagonists, paving the way for more playable female assassins.

Street Fighter was a popular arcade game that almost everyone who grew up in the arcade era played. And Chun-Li who debuted in Street Fighter II, the first female in the series and an expert martial artist working as an Interpol officer seeking revenge against M. Bison who killed her father. She has a strong sense of justice and strongly believes in protecting the innocent and saving the lives of others. Highly disciplined, seasoned, and courageous Chun-Li is the voice of reason at Interpol. Chun-Li is sweet, elegant, and feminine and she is a brave fighter.

Though known to allow her emotions to get the best of her, she exercises restraint when nearly losing her life at the hands of the man who killed her father. Because of her devotion to justice, she often becomes allies and friends with other soldiers and cops. And she has shown great resilience and determination in pursuing intense crime organizations. Chun-Li displays her kind and caring, almost motherly, traits in her arcade ending. After rescuing a comrade, she goes on to teach Kung Fu to children. Chun-Li was inspired by all the people she had met and has made it her new goal to teach her new students about strength and beauty, as well as to help shape their future.

Halo was my first first-person shooter game, and probably a vast majority of people’s first. And although Cortana is an NPC (non-playable character) she is of drastic importance to the Halo Universe. Cloned from Dr. Catherine Halsey’s brain, she was one of the two who survived out of twenty flash clones. And at her creation had removed the viral termination code, something Halsey couldn’t figure out how she had done that. Cortana had chosen Master Chief as her handler because she said he had something that none of the other Spartans had, which was luck.

She was witty, sarcastic, smart, and playful, like crazy smart. But being an A.I. that isn’t hard for her to do. She was a vital character in helping Master Chief defeat the Covenant and the Flood. Her strategizing and thinking three to four steps ahead to help; he formed a strong bond, almost human-like to Master Chief. She had exhibited extreme devotion to him beyond that which was required of her.

She seemed to be most loyal to him and is willing to help him with any task he requested of her. She even joked about having a relationship with the Master Chief and it is often implied that they had developed some form of attachment, and it really seemed like they did. She was amazing with her abilities and although she was deteriorating from her age as an A.I. she fought to help the Chief even with her dying breath.

These ladies in the gaming world are but a few of the hundreds that have made history and welcoming females into this world. They are not to be messed with, undervalued, nor unappreciated for they are strong, confident, beautiful, vibrant, and amazing characters that we have known and loved for years and I know I speak for many when I say I cannot wait to see what is in store for us girls in future games.