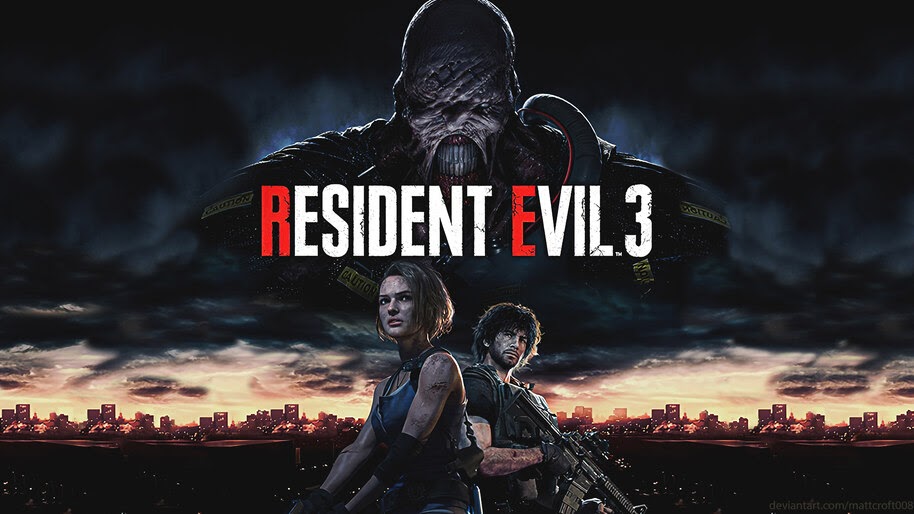 Capcom’s Resident Evil 3 is a great game, despite its length – Video Review


Capcom’s Resident Evil 3 is a solid experience all around even if it doesn’t stick around that long.

Capcom seemed to be on a bit of a streak, with the massively successful Resident Evil 7 followed up by the excellent Resident Evil 2 Remake, things were looking up for Resident Evil 3. However, I feel that Capcom might’ve taken this game out of the oven a bit too early for their own good. This is our review of Resident Evil 3.

Obviously, the graphics in this game are beautiful. Capcom’s proprietary RE Engine is absolutely stunning. Lighting and textures feel vibrant and lifelike, while animations look and feel natural. Character models all look fantastic as well. Jill and Carlos’ updated models capture the spirit of their 1999 counterparts but take full advantage of a modern update. It’s obvious a lot of care and time went into the creation of these particular characters. The same can be said for the rest of the cast of characters including of course: Nemesis.

On top of this, Capcom’s environmental design is top-notch. City streets, disgusting sewers, and dark dingy buildings not only support the scenario of a total viral outbreak, but they contribute to environmental storytelling as well.  There are some small nitpicks I have, such as Jill reloading 6 rounds in the grenade launcher even when I have less than that in my inventory or the numbers on the lockers in the police station. Other than that, the presentation is stunning and I hope Capcom continues to use the RE Engine and improve on it for all future Resident Evil titles.

The story and the characters are great as well. It’s a huge step forward when considering the original. The dialogue is fluent and natural as well as pretty badass, especially for Jill. There’s really nothing more thrilling for me than blowing up a Hunter Gamma in the sewers and hearing Jill drop an F-Bomb: I’m a total Jill simp. For the sake of spoilers, I’m going to skip the finer details, but basically the story takes place a few hours before and a few hours after the events of RE2. Jill and Carlos are working together to not only escape the city but to expose the truth to the world about Umbrella’s experiments. Even though brief, it’s a story that feels tight and carries a small theme about corporate greed, even if it feels a bit forced. Something of note is the controversial choice Capcom made not to bring back real-time decision making.

Although the lack of this system makes for a more streamlined narrative with a more cohesive plot overall, I think this certainly hurts the game’s replayability. One of my favorite aspects of the original game was going back and trying out different combinations of choices to see what type of narrative I would end up with. The original’s structure also lent itself to several different endings. This aspect of the classic is now lost in this remake and while I think the new narrative is good and filled with plenty of high stakes action. It would’ve been nice to see the old system make a return.

The gameplay on display here is overall good, but I’m not sure of some of the decisions that Capcom made in regards to controls. Just like the 1998 classic, the dodge mechanic is clunky and a bit difficult to get a handle on. Even after multiple attempts to dodge enemies, it seems I can only get the dodge or the perfect dodge down a handful of times. I’m not sure if this is due to the implementation of the mechanic or poor design overall. Thankfully they changed this in the sections with Carols for a more effective shoulder check, followed by a powerful punch. It definitely comes in handy in those sticky situations when you need something real quick just to give yourself some breathing room. Other mechanics that seem to be missing are defense based such as shoving a grenade or knife into a zombie to get out of an attack. It seems like that is a huge oversight for a sequel to a game that implemented that mechanic so well. Combat overall is good, I’ve never had an issue aiming straight for the head of a zombie and landing a few headshots.

A welcomed addition to the combat is the introduction of generators and explosive barrels. These environmental elements add a new level to street clearing of enemies and stunning the ever pursuing Nemesis. Other than these points, gameplay, and combat is essentially the same from RE2. An argument could be made that if Capcom’s desire was to turn up the action, perhaps they should’ve changed up the mechanics a bit more to be a little more dialed in for action: but this isn’t something that breaks the game. Capcom also made the bold choice to turn down the puzzle-solving in general. As a series staple and a remake of a game with some really memorable puzzles, I really think they missed the mark here. I don’t mind some puzzles to break up the monotony of shooting and running that this game puts forward. It’s not something I’m hung up on, but I definitely think it’s worth noting here.

It also seems that the gore was turned down in this game and it’s very noticeable. Coming off the back of RE2, heads were exploding, limbs were flying and dynamic physics was used to simulate enemy death. However, it would seem Capcom scaled these animations back in an effort to give the engine a break so it can focus more heavily on the larger environments and the number of enemies on screen. Like I said, not a big thing to be hung up, but certainly worth mentioning. Oh and for all you long time fans, there are still boxes to break and collectibles galore to find.

One of my biggest issues with Resident Evil 3 is the length. After my first run through, I came in at a total playtime of 5 hours and 28 minutes. I know it’s subjective, but I believe that any full price, $60, single-player game in 2020 should have at least 12-15 hours of initial gameplay. Don’t get me wrong, this doesn’t make RE3’s mechanics or storytelling any less spectacular, I just wish there was more of it. In addition to this, the lack of a conventional new game plus mode doesn’t help either. In place of this, Capcom has offered a store to use in-game currency to buy special weapons for your new game. My only issue with this is how are the points calculated, how do I know how many points I am and am not getting per playthrough, and where does it matter most to maximize my efforts to get points. All of these unanswered questions make for an uninspired second playthrough.

As a fan of the original, another thing I take issue with is the glaring omissions of central set pieces from the 1998 classic. I’m a total Res head, and killing the undead will always have a special place in my heart. But I just feel like some of the things that made this game memorable are missing entirely. That’s not to say the new additions aren’t great on their own, but as a long time fan, I was expecting to see some stuff that they didn’t even hint towards: which honestly might’ve only disappointed me further. There are some changes that I do feel are a fresh take on things, however, overall I felt that the old game did these moments better. Especially one involving a cameo from the last game and the fate of a fan-favorite character.

Another big omission is the mercenaries mode, this classic RE mode lent itself to hours of gameplay, however, it would seem that Capcom replaced it with Resistance, which in its current state is rough, to say the least. One other thing that really gets under my skin is the lack of proper new game plus mode. I’m sorry, I just don’t feel a shop you can spend in-game currency on for new upgrades in a new campaign was the way to go. I feel like this is something Capcom could’ve just as easily added in addition to a new game plus mode.

One last thing that I find to be a bit of a disappointment is the integration of Nemesis. In the opening hours of the game, he’s classic Nemesis. Chasing you around, emulating Mr. X in a more intense and intimidating way. Just like the original doing battle with him nets you drops of gear upgrades. Unfortunately, this doesn’t last for long. While I do enjoy the scripted sequences following the opening hours, I feel like the charm has worn off. Unlike Mr. X in RE2, Nemesis isn’t always stalking you. After downtown Raccoon City, he actually becomes a more neutered version of the character. While these scripted sequences are fun and I do enjoy them for what they are, I have to admit they are a bit of a let down when in 98 we had a much more omnipresent and lingering menace to deal with. Ultimately, I still feel Mr. X in RE2 is the more intimidating and more dynamic of the two and it’s a shame they couldn’t figure out a better way to implement more menacing Nemesis.

Like I said before, Resident Evil 3 isn’t a bad game but it does have a lot of setbacks. For every aspect I found to be disappointing there are 2 that are equally as great. Although brief, returning to Raccoon City, was still an enjoyable experience. I have to stress that this game will be an absolute blast for Resident Evil fans, however, casual gamers really need not apply unless they find it on sale and want to see what all the fuss is about. However, I would urge those players to first check out the excellent Resident Evil 2 Remake first before deciding if they want to check out this one cause it’s objectively the more well-rounded experience of the two.

If you liked this review please subscribe, give us a like and share this video with your friends. If you liked our review of Resident Evil 3, check out what the other critics had to say here. Always remember, to stay nerdy friends.