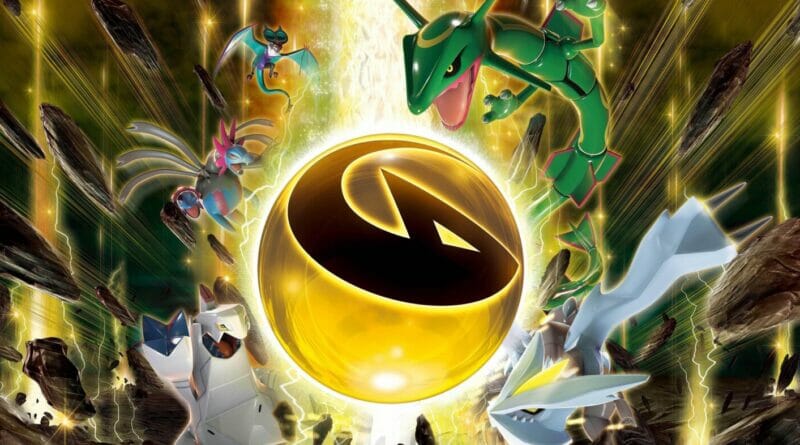 After many weeks of rumors and speculations and unconfirmed reports from reliable sources, Pokemon International finally confirms and announces the Pokemon TCG Evolving Skies expansion set. The announcement came early this morning with the Pokemon Company confirming reports of Pokemon TCG bringing back Dragon-Type Pokemon and the inclusion of the full set of Eevee Heroes expansion set that is releasing later this year in Japan.

Evolving Skies will also mark the debut of Rayquaza and Duraludon VMAX in the Pokemon Sword & Shield TCG set. In addition to the debut of these two Pokemon and their VMAX version in the Pokemon TCG Sword & Shield set, Evolving Skies will include Eevee and all of its Eeveelutions, and each Evolution of Eevee will appear as a Pokémon V and Pokémon VMAX. Some Eevee Evolutions will also have Battle Styles, such as Single Strike Flareon VMAX, Rapid Strike Vaporeon VMAX, Rapid Strike Sylveon VMAX, and Single Strike Umbreon VMAX.

Evolving Skies will be available in booster packs, special collections, most likely Oversized Card Collection Boxed, Pin Collections Sets, and will also feature two versions of the Elite Trainer Box, (four total if we are going based on the different artwork variants for both boxes). With one featuring Umbreon, Flareon, Jolteon, and Leafeon and the other featuring Sylveon, Vaporeon, Glaceon, and Espeon. The full Evolving Skies expansion set includes the following cards:

The craze for Pokemon TCG has been at an all-time high. The highest since the late 90s and early 2000s when the Pokemon fandom was at its peak. Throughout the years Pokemon has maintained its status as a pop culture icon both overseas and here in the West but in the past year alone that popularity has catapulted and the hunt for Pokemon cards has become a real-life Pokemon journey.

Pokemon TCG is currently gearing up for the official launch of Sword & Shield: Chilling Reign which launched a Build & Battle Box last week with the full expansion set launching on June 18th. As retailers gear up to get back to the normal flow of things when it comes to collecting Pokemon Cards, your best bet would be to pre-order any and all items for Chilling Reign and Evolving Skies so you don’t miss getting your hands on the latest collection.