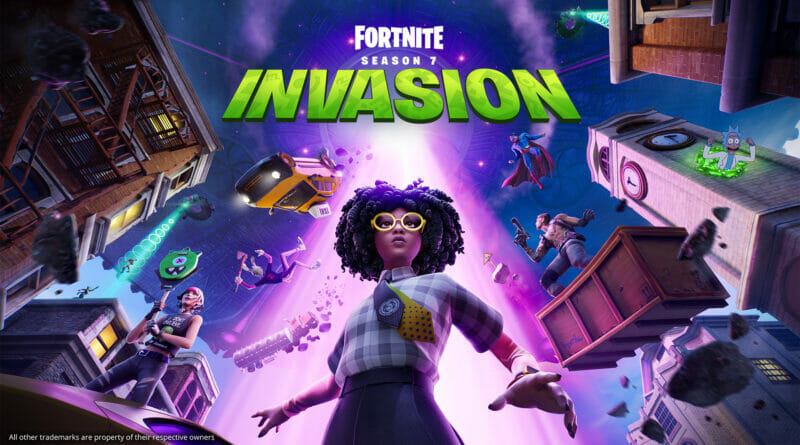 
Fly UFOs, create your own alien, fly around with Superman and get Schwifty with Rick Sanchez in Fortnite Season 7: Invasion

A new season of Fortnite is upon us and it’s bringing a new storyline, new map locations, and intergalactic beings, and most importantly aliens! In Fortnite Season 7: Invasion players will fight alongside The Imagined Order leader, Doctor Slone. Along the way, players will meet characters who will either embrace the invasion, oppose it or keep on fishing.

Characters Who You Will Meet:

First and foremost, that’s you, Kymera. The customizable extraterrestrial who you will make your own by collecting various alien artifacts which you will use to unlock additional styles which you can then mix and match in a variety of ways. Mix and match head shapes, eye colors, skin patterns and so much more to make Kymera uniquely yours. Players will also meet characters like Guggimon, the fashion horror artist. Sunny, Joey, Zig, Rick and Morty’s Rickest of Ricks, Rick Sanchez and DC Comics’ Last Son of Krypton, Clark Kent aka Superman.

In Fortnite Season 7: Invasion players will now be able to shoot down or hijack flying saucers and use them to their advantage. Players can fly around the map (yes, your squad can ride with you) and shoot enemies from above. Pick up anything and everything that isn’t bolted down to the ground floor and those them as you please, even at your enemies.

Weapon Crafting Is Here To Stay:

First introduced in Fortnite Season 6: Primal, the crafting of weapons are here to stay. Using nuts and bolts players can now craft vaulted weapons! Remodel your weapon on demand and turn your assault rifle into the vaulted burst assault rifle, remodel your submachine gun into the rapid fire smg, and your shotgun into the lever action shotgun (everyone loves this shotgun, right?)

That’s not all, Fortnite Season 7: Invasion will also introduce new weapons like the Recon Scanner which players can use to survey the area. Shoot through structures with the Rail Gun. Use weapons like the Pulse Rifle, the Kymera Ray Gun and more as new weapons will be added to this current season as the season goes along.

Rewards and the Return of Battle Stars:

Fortnite Season 7’s new Battle Pass sees the return of Battle Stars. As you play along and level up, even without the Battle Pass you the player will earn five Battle Stars every time you level up. Earn and collect these Battle Stars to unlock Battle Pass rewards when you them and in the order you want them (free rewards work the same way for those who do not own the Battle Pass). As you progress, more reward pages will become available.

Unlock all the rewards on one page and get access to locked rewards. As with every Fortnite Battle Pass, leveling up to level 100 will earn you every single reward available and any potential rewards that become available after reaching level 100. Fortnite Season 7 puts the power in your hands.