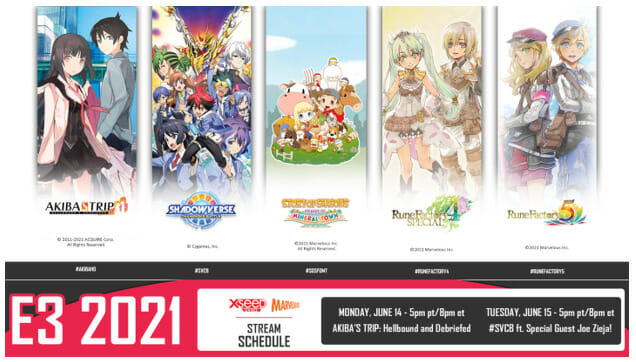 XSEED Games shows up during Future Games Show as they reveal new platforms for ‘Story of Seasons: Friends of Mineral Town’ and ‘Rune Factory 4 Special’. XSEED also announced an August 10th release date for ‘Shadowverse: Champion’s Battle and an early 2022 launch window for ‘Rune Factory 5’. In addition, during their Future Games Show showcase, XSEED Games also showed off new trailers and images for these currently released and upcoming titles all of which you can check out below.

Shadowverse: Champion’s Battle: The strategic card battle RPG based on the hit mobile game will launch on the Nintendo Switch™ system on August 10, 2021. The publisher will be releasing a digital demo and starting digital pre-orders at a later date, with more details to be announced soon

In Shadowverse: Champion’s Battle, players take the role of a transfer student to Tensei Academy, where they are quickly introduced to the Shadowverse card game by their classmate, Hiro Ryugasaki. The new friends team up with Shadowverse club president (and only member) Rei on a quest to master the popular card battle game and restore the club to its former glory by winning the national championship. Throughout their adventures, players will be able to explore unique locations around the school and surrounding town, where events and encounters await in the least expected places. Team up with new friends, battle to become the national champions, and save the Shadowverse Club for future generations!

Rune Factory 5: The first brand-new entry since Rune Factory 4 was released in 2013 will release for Nintendo Switch™ in North America in early 2022, and the first look at English gameplay was revealed.

Set off on a grand adventure in a fantasy world with the latest entry in the Rune Factory simulation RPG series. After losing their memory, the hero lands in a small town blessed by nature. There, they are recruited into a band of peacekeeping rangers, and their new life begins. In addition to their normal duties, the hero can farm the land, cast a line into the nearby river, and so much more! Team up with townsfolk to battle monsters and unleash powerful combination attacks—just one of the features new to the series. The stage is set, and the curtain rises on an exciting new adventure in Rune Factory 5!

Rune Factory 4 Special: Previously released to high praise on Nintendo Switch™, the remastered classic will be coming to the PlayStation®4 computer entertainment system, Xbox One, and Windows PC this fall

Rune Factory 4 Special opens with a young man or woman falling from an airship and landing in the town of Selphia. Appointed the local regent by mistake, the hero is charged with protecting the town and bettering the lives of its people. As the newly appointed prince or princess, royal duties are fulfilled by issuing orders to help the town prosper, or by taking a more relaxed approach to governance by raising crops and helping townsfolk.

Should some dungeon adventuring be on the day’s itinerary, a vast array of weapons along with magic can be crafted or bought for battle against dangerous foes—companions or friendly monsters can also join to aid the player during their travels. And, of course, there’s a huge cast of lovable townsfolk, including 12 potential suitors to woo and marry.

STORY OF SEASONS: Friends of Mineral Town: Previously released on Nintendo Switch™ and Windows PC, and one of XSEED Games’ all-time best-selling titles, the adorable farming/life sim will be sprouting on the PS4™ system and Xbox One this fall.

STORY OF SEASONS: Friends of Mineral Town is a complete remake of the beloved Game Boy Advance title, re-envisioning the charming and occasionally mysterious world of Mineral Town with updated gameplay, graphics, and characters for the modern-day. Core features of the STORY OF SEASONS series also make their return, with multi-floor mining and fan-favorite events like horse racing. Invited by Mayor Thomas to visit the farm owned by their late grandfather, a young city-slicker returns to Mineral Town to find the once-thriving field has fallen into disrepair. In their new hometown, they’ll tend the land and become part of the bustling rural community. Along the way to becoming a world-class farmer, they’ll befriend townsfolk and, perhaps, even find romance.

Which of these titles revealed during Future Games Show are you most excited for?