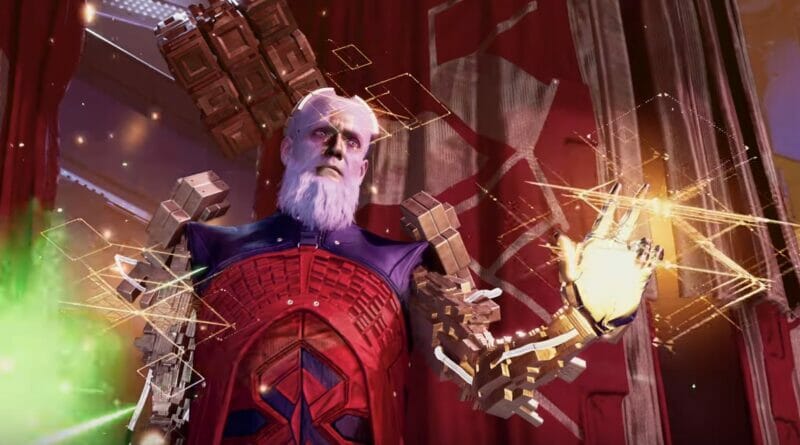 Marvel Games VP of Creative Bill Rosemann lends his expertise to give fans a greater understanding of Grand Unifier Raker and the Universal Church of Truth in the new Marvel’s Guardians of the Galaxy cinematic. In this video, Bill, the former editor of the Guardians of the Galaxy comic book from 2008 – 2010, explains the origins of the cybernetically-enhanced zealot and the enigmatic organization, both intent on bringing the so-called “Promise” to the whole galaxy.

This cinematic sees Star-Lord and his crew come face-to-face with the menacing Grand Unifier Raker, flanked by two of his imposing bodyguards, the Inquisitors. Despite being shot at by Rocket, Grand Unifier Raker is (currently) not interested in harming the Guardians and instead wants to introduce them to the mysterious Matriarch. The dramatic scene closes with the Universal Church of Truth’s colossal starship entering the fray, swallowing the Hala’s Hope whole and capturing our Guardians.

Bill Rosemann says “Collaborating closely with the team at Eidos-Montréal generated the incredible opportunity to delve into the Marvel archives, tap into some of our deepest cuts, and bring to life characters not previously seen outside the pages of classic comic books. Grand Unifier Raker, the Universal Church of Truth, and previously revealed characters like Lady Hellbender and Cosmo are just a taste of what fans should expect from this game, where decades of Marvel stories shaped this new universe. It’s original, it’s outlandish, It’s 100% Guardians!”

NVIDIA revealed the cutscene with their Gamescom 2021 announcement that Marvel’s Guardians of the Galaxy will launch with NVIDIA DLSS and Ray Tracing for PC, and be available to play via GeForce NOW, NVIDIA’s cloud gaming service.