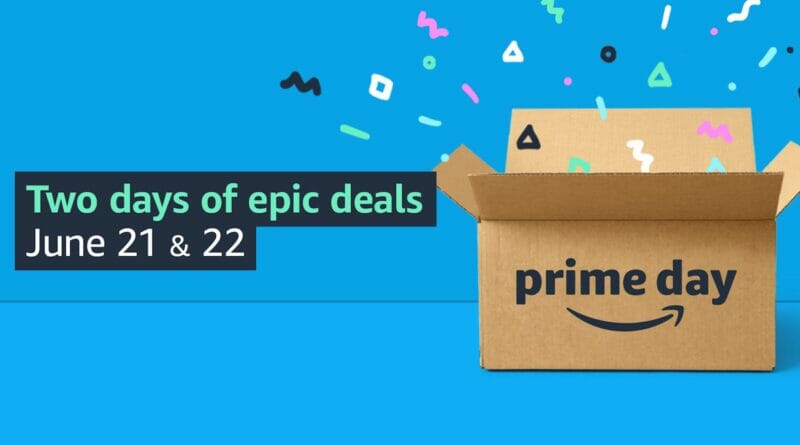 
These Prime Day Deals You Do Not Want To Miss!!!!

Prime Day is here and with it comes a slew of new and Amazon Prime-exclusive deals. Here’s a list of some of the best deals we were able to find on Amazon Prime for Prime Day, links included. Don’t have Amazon Prime? Don’t worry we got you covered with a FREE 30-day trial of Amazon Prime on us! Just click the link right here to sign up. Make sure to use any of the provided links below as well as we might get a small commission if you make a purchase using our links! Thank you and Happy Prime Day!

Assemble your team of Earth’s Mightiest Heroes, embrace your powers, and live your Super Hero dreams. Marvel’s Avengers is an epic, third-person, action-adventure game that combines an original, cinematic story with single-player and co-operative gameplay. Assemble into a team of up to four players online, master extraordinary abilities, customize a growing roster of Heroes, and defend the Earth from escalating threats. Marvel’s Avengers begins at A-Day, where Captain America, Iron Man, the Hulk, Black Widow, and Thor are unveiling a new, hi-tech Avengers Headquarters in San Francisco. The celebration turns deadly when a mysterious enemy causes a catastrophic accident which results in massive devastation.

Blamed for the tragedy, the Avengers disband. Five years later, with all Super Heroes outlawed and the world in peril, a sprawling adventure ignites when a determined young woman named Kamala Khan sets out to reassemble and rebuild the Avengers to stop the unchecked power of the secretive new force known as AIM. Marvel’s Avengers continues the epic journey with new Heroes and new narratives delivered on an ongoing basis, for the definitive Avengers gaming experience. Sony: One-time online access required for the single-player campaign; online access required for multiplayer and to download post-launch content. Free Square Enix Members account required. A platform-specific online subscription fee may be required.

Outriders is a 1-3 player co-op RPG shooter set in an original, dark and desperate sci-fi universe. As mankind bleeds out in the trenches of Enoch, you’ll create your own Outrider and embark on a journey across the hostile planet. With rich storytelling spanning a diverse world, you’ll leave behind the slums and shanty towns of the First City and traverse forests, mountains and desert in the pursuit of a mysterious signal.

Final Fantasy X tells the story of Tides, a star blitz ball player who journeys with a young and beautiful summoned named Yuna on her quest to save the world of Spire from an endless cycle of destruction wrought by the colossal menace known as “Sin”. Final Fantasy X-2 returns to the world of Spire where High Summoned Yuna travels with her companions Rikki and Paine to unravel the mysteries of the messages hidden in the spheres she hunts, not knowing that the answers she seeks may change everything.

Power Rangers: Battle for the Grid Collector’s Edition – Xbox One: $19.99

A modern take on the 25-year-old franchise, Power Rangers: Battle for the Grid pits current and classic Rangers and villains like never before in 3v3 tag team battles. The controls promote simplicity and fluidity, enabling beginners to enjoy the combat system and encouraging advanced players to delve into its gameplay mechanics – including real-time assist takeovers, dynamic defense through push blocking and aerial guard, customizable juggle combos, and a unique Megazord comeback mode. The Collector’s Edition of Power Rangers: Battle for the Grid includes the full game, the Season One DLC, Lauren Shiba, the exclusive Lord Drakkon Evo II Skin, and the exclusive Kimberly Hart Mighty Morphin Pink Ranger Skin.

Enter an era of war within the world of Ivalice. The small kingdom of Dalmasca, conquered by the Archadian Empire, is left in ruin and uncertainty. Princess Ashe, the one and only heir to the throne, devotes herself to the resistance to liberate her country. Vaan, a young man who lost his family in the war, dreams of flying freely in the skies. In a fight for freedom and fallen royalty, join these unlikely allies and their companions as they embark on a heroic adventure to free their homeland.

Final Fantasy XII The Zodiac Age improves upon the 2006 classic Final Fantasy XII, now more beautiful and easier to play than ever. The high-definition remaster introduces several modern advancements, including reconstructed battle design and a revamped job system. With newly implemented trophies and share functions, as well as stark visual and sound improvements in true HD for the first time, players both returning and new to the game will experience a grand adventure that spans the world of Ivalice in an entirely fresh and improved way.

DRAGON QUEST XI S: Echoes of an Elusive Age – Definitive Edition tells a captivating tale of a hunted hero and is the long-awaited role-playing game from series creator Yuji Horii and character designer Akira Toriyama. While it is the eleventh mainline entry in the critically acclaimed series, DRAGON QUEST XI S is a completely standalone experience that features entirely new characters, a beautifully detailed world, finely tuned turn-based combat, and an immersive story that will appeal to longtime fans and franchise newcomers alike.

The Definitive Edition includes all the content from the original release of the acclaimed DRAGON QUEST XI, and adds extra character-specific scenarios, the choice of playing with the original soundtrack or a grand orchestral version of the music, the ability to switch between 2D and 3D graphic modes, a Japanese voice-acting option, and much more! A young man, about to participate in his village’s coming of age ceremony, heads off to the top of the local lookout point alongside his childhood friend. After a series of unexpected events, this intrepid adventurer learns he is the reincarnation of a legendary hero from a forgotten age.

The young hero sets forth into an unknown world on a journey to unravel the mystery of his past…but the welcome he receives is far from warm. Upon revealing his identity to the King, the hero is branded as “The Darkspawn” and hunted by a relentless army. Fleeing from his pursuers, the hero assembles a band of endearing adventurers who believe he is actually The Luminary reborn. He and his newfound companions embark on a quest that will take them across continents and over vast oceans as they learn of an ominous threat facing the world.

Welcome to a wondrous all-action show, the likes of which has never been seen before! Balan Wonderworld is a wondrous 3D action platformer game themed around the Balan theatre. Led by the enigmatic Maestro named Balan, the stars of the show Emma and LEGO will use special abilities from a multitude of characterful costumes as they adventure in the bizarre and imaginary land of Wonderworld. Here, memories and vistas from the real-world mix with the things that people hold dear. Twelve different tales await our stars in the Wonderworld, each with their own unique quirks. They will explore all corners of these labyrinthine stages, filled with a myriad of tricks and traps, to get to the heart of each story.