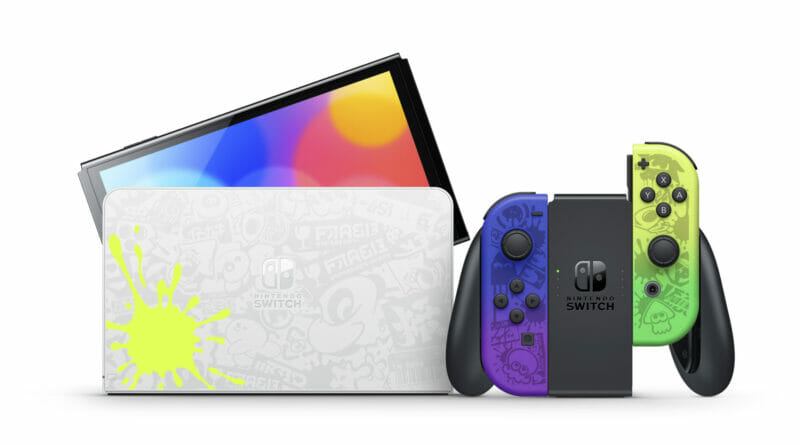 Something fresh is surfacing! On Aug. 26, a special edition Splatoon 3-themed Nintendo Switch – OLED Model system will be available in stores featuring design inspiration from the new Splatoon 3 game (sold separately). Adorned with splashy, squid-tastic images straight out of Splatsville, the Nintendo Switch – OLED Model Splatoon 3 Special Edition includes a set of one blue and one yellow gradient Joy-Con controllers with white underbellies and a white, graffiti-themed Nintendo Switch dock. To see the system in action, check out the trailer below.

In the Splatoon 3 game, you’ll engage in chaotic 4-v-4 Turf War** clashes across a mix of new and returning stages, where teams face off to cover the most ground in their ink to win, and discover features, weapons, and the trendiest gear this side of the sun. Splatoon 3 also features a single-player campaign and the next iteration of the co-op Salmon Run mode. Join Agent 3 in the single-player story mode for a fight against the unruly Octarians and discover the secrets of a mysterious place called Alterna and the Fuzzy Ooze. When diving into Salmon Run, you’ll link up with teammates** to fend off waves of dangerous Salmonid bosses, some of which are colossal in size!

Nintendo Switch – OLED Model features a vibrant 7-inch OLED screen, a wide adjustable stand, a dock with a wired LAN port (LAN cable sold separately), 64 GB of internal storage, a portion of which is reserved for use by the system, and enhanced audio in handheld and tabletop mode. The Nintendo Switch – OLED Model system can be played in three modes: TV mode, played on a TV while the system is docked; handheld mode, when the Joy-Con controllers are attached for portable play; and tabletop mode for on-the-go multiplayer gaming sessions.

The Nintendo Switch – OLED Model Splatoon 3 Special Edition will be available in stores at a suggested retail price of $359.99. Splatoon 3 is now available for pre-order at select retailers, in the My Nintendo Store, and in Nintendo eShop.