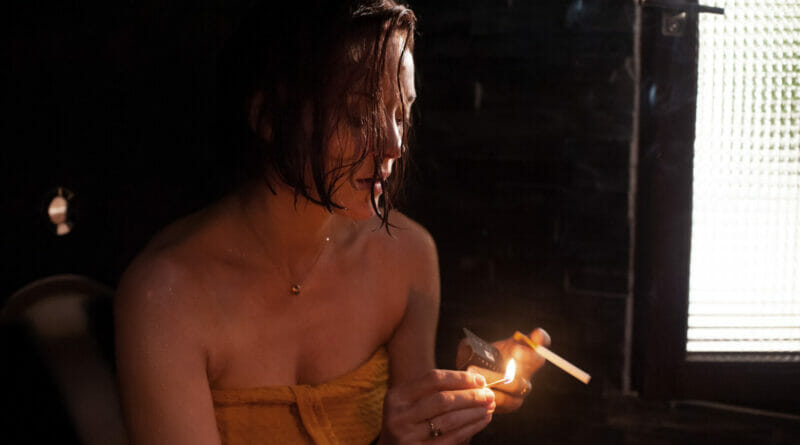 “Annette” Film Review: Accomplishes The Astonishing Feat Of Being Both Incredibly Weird and Fantastically Dull


“Annette” is a joyless, bizarre musical that is too strange and experimental for the average viewer to enjoy. Whether it is the constant sing-song dialogue, which doesn’t commit to either fully singing or spoken dialogue, or the completely bonkers choices that are made by the writers, Annette is a mess.

“Annette” is the first film written by brothers Ron and Russell Mael, of the band Sparks, and directed by Leo Carax, in his English-language film debut. What they attempt to do with the film is commendable, as it is wholly unique and memorable in its individuality. However, with an overblown run-time of nearly two and a half hours, the movie long wears out its welcome. Adam Driver does everything he can with the character of Henry McHenry, but listening to his half-singing for the majority of the film grows tiresome very quickly. This isn’t as problematic when he is allowed to fully commit to singing, but these times are few and far between.

Even if Driver were given material that wasn’t largely a constant repetition of the same lyrics, it wouldn’t have been half as bad. Marion Cotillard is much more impressive as Ann, Henry’s opera singer wife; however, her disappearance at about halfway through the film is made more noticeable with each passing musical number. Simon Helberg has been cast a little better, as he seems to be more comfortable in a musical than Driver. That being said, Sparks have a very distinctive style, and it seems off to hear anyone sing along to it, it just doesn’t seem to be the correct type of music to be in a musical.

The oddest thing about “Annette” is the titular character Annette herself, the child of Driver and Cotillard’s Henry and Ann, who is played by a marionette rather unsuccessfully. There are few things that ruin a movie like a puppet that is meant to be a living child. The only thing that is comparable is the god-awful animatronic baby from Twilight, which is arguably better than what they have done with Annette. She is such a large part of the movie that it is impossible to overlook.

Whenever the movie attempts an emotional scene or something serious that involves Annette, the marionette breaks any suspension of disbelief. This bizarre choice is only made worse when Annette is replaced by a real girl, who does a fantastic job at the end of the film. It makes me wonder why they just didn’t age the character up to an age where a real actor could have played the part earlier, instead of having the audience have to suffer through a wooden Annette for two hours of the film.

There is not much to enjoy about the film. Even if you were a die-hard musical fan, I think that this film would be a hard pill to swallow. Perhaps those who consider themselves Sparks fans may get the most out of “Annette”, but even at that the story of the film isn’t all that interesting. Adam Driver as a comedian is not funny, as in most movies with stand-up comedy.

None of the “jokes” in the film land, nor do I think they are intended to be funny. Like the movie as a whole, I’m not sure what the intention of the filmmakers was. It is neither funny nor thought-provoking. No one seems to have any real motivation to do anything. The murders in the film are either half-hearted or unintentional, and the plot just seemingly trudges forward without really exploring anything of substance.

“Annette” feels as though it is an experimental film given far too much money and too much freedom. It’s a challenging feat to be both incredibly weird and fantastically dull all at once, but somehow “Annette” manages to do both. If you were ever interested in wooden babies being born in clown makeup, singing during oral sex scenes, a levitating child marionette singing opera, or sing-talking through the entirety of a film, then this might be the film for you. For everyone else, do yourself a favor and skip this one, or at the most scan through it, because some things need to be seen in order to be believed.