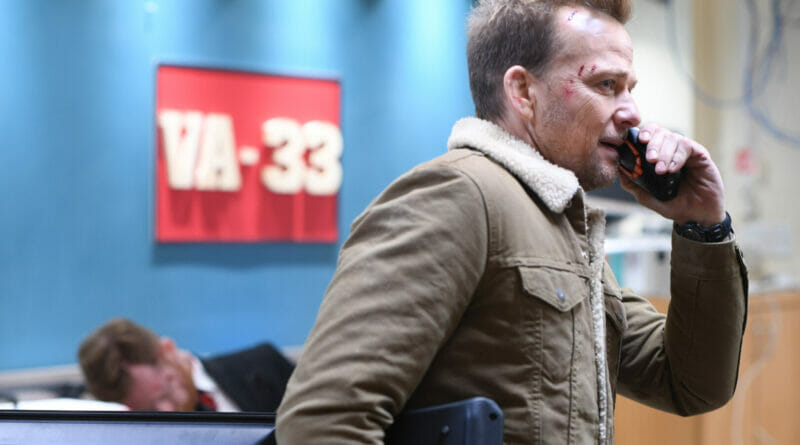 
Assault on VA-33 is a movie it could’ve done without. This is as generic as generic films get and its not pleasant.

Assault on VA-33 falls under the action-thriller genre of movies and hits none of those genre beats and truly misses the mark on what possibly had the potential to be a Friday night kickback popcorn movie. Sadly, the film is so generic, dull, and damn near laughable that you can simply play it in the background while getting some stuff done around the house or getting some work done for those of you who work remotely.

Decorated army veteran Jason Hill (Sean Patrick Flanery) stars in this “action-thriller” film directed by Christopher Douglas-Olen Ray. While visiting his wife who works at the local VA hospital (VA-33) as a shrink. A group of terrorists infiltrates the hospital taking hostages including Jason Hill’s wife and eventually his daughter as well. Jason Hill is the last line of defense (why? how?) and has to take out all of the terrorists on his own before all the hostages are killed, including the military general who is accused of holding the terrorist’s leader’s brother captive.

My biggest issue with this film is that the action sequences are outright comical and forgettable. Including the film’s terrorists. Who spend more time bickering with each other with crappy one-liners rather than being actual threats, or rather actual terrorists as they’re supposed to be. And for a military hospital to have ONE sole security guard stationed at the front desk “guarding” the entirety of the building is rather….useless, and questionable from a storytelling standpoint.

Everything in this film was a little too convenient in order to push the story forward. There was little to no real sense of urgency or danger for anyone who was really in danger. Even the ones who were ultimately killed were done so just because. Especially when you have the leader of the terrorist showing anger about killing someone. If this guy is a terrorist and if he is indeed that much of a threat, why is he angry about killing ANYONE?

Everything about this movie is bad. The way the story is told, the editing, the fight choreography, the acting, the cinematography, even the VFX were abysmal. You have a few stars in this film (Rob Van Dam, Michael Jai White, and Sean Patrick Flanery) and there are no lasting impressions. You have a chief of police not caring about a VA hospital being under siege while his subordinate shows more urgency and care for what’s happening. It just doesn’t make sense.

Clocking in at an hour and thirty minutes, I found myself counting down the minutes to see this film end. I just wish the film and its writer would’ve taken the story a bit more seriously and would’ve made some more logical choices for how things played out. You mean to tell me that a former soldier who was just held hostage had a gun on him the entire time and the moment he’s freed and has the opportunity to kill the terrorist’s leader he shoots him in the hip instead of the head? Especially from point-blank range? Please explain!

If you like to review bad movies yourself or find movies so bad that they are good, Assault on VA-33 is the film for you. Other than that, watch it at your own discretion. Assault on VA-33 releases April 2nd.