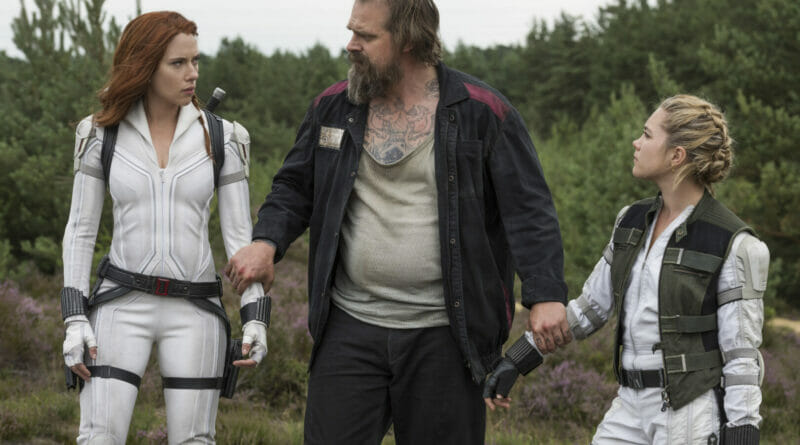 This weekend was amazing for many reasons, it was my birthday and it conveniently landed on the same day that Black Widow was released. One thing you should know about me is that I don’t watch trailers, at all for any movie I really care about. And I avoided the trailers for this movie like the plague because I truly looked forward to this one. In my honest opinion, it was a perfect send-off for Natasha Romanoff, and we finally found out what the Budapest mission was; and it gave a very grim outlook on the whole “Just like Budapest all over again!” and “You and I remember Budapest very differently.”

When we first meet the famous Black Widow, she was a side character that everyone knew in the second Iron Man movie. She helps Tony and Pepper, kicks some serious ass, and looks good while doing it. Her evolution and character development have been a wonder to watch and experience. And we come into her new movie right after the events of Captain America: Civil War, as we see General Ross on the hunt for her.

We see her, a seasoned warrior lose the family she fought hard to get and protect; the Avengers split, broken, some on the run, and some in jail. And we see her all alone for the first time, and she even believes she worked better alone. We also see her very vulnerable, eyes red and from tears, as she tries to bury her emotions. But as the movie unfolds we see a completely different side of the most fearsome assassin. Sure we saw her sassy and teasing with the other Avengers, but with her “sister” Yelena, she is motherly, playful, and like most siblings, competitive.

She was psychologically programmed to follow orders and was nothing more than a weapon. But when she defected to the Avengers, she saw the many errors of her ways. When a fellow Black Widow was injured and near death, we saw her try to help and comfort her. Even though it was dangerous; she knew what it felt like to not be in control of her own fate. Although I admit, I do wish I saw more of her flashbacks in the Red Room, we caught glimpses of it during Age of Ultron, but other than that there was a lot of mystery that surrounded her training.

So after she defected from the Red Room and to the Avengers, Romanoff knew that not only was it her job to help her sister, but also the other Black Widows break free from the chemical compound that subjugated them all. Dreykov, the head of the Widow Program and the Red Room, according to Natasha, was a small man and a coward who hid in his floating castle and controlled all the women. He even turned his injured young daughter; Antonia Dreykov, into one of his widow puppets called Taskmaster; was completely unexpected.

Due to Taskmaster’s origin, who in the comics, was Tony Masters, a mercenary for hite who often battled The Avengers, Deadpool, and Spider-Man. It was an interesting twist; and although Black Widow freed Taskmaster from the mind control, that left a less than satisfying end to Taskmasters reign. Cinematically, it was an opportunity that was squandered away that could have given a much more gratifying feel to it. As a Captain America/Bucky duo, it would be exciting to see this relationship explored in future movies or shows.

The movie did dabble in the theme that no one should underestimate a woman because she can accomplish anything. With all the fight for women’s equality going on in the world, it’s nice to see a female-led movie, that was also directed by a female, that is not so blatantly obvious about women’s rights and how men perceive us. It was realistic (well not completely realistic) that the message wasn’t shoved down our throats and it was its own thing. Romanoff got beat down, injured, but never gave up, she was relentless to shut down the Red Room because of what it did to young girls.

The movie also played on the family theme. Just because they were not blood, and may even be fake for undercover purposes, but in some semblance, they cared for each other. It was real for them, and they did fall in love with their family. Even in the other MCU movies, Natasha showed a lot of love and care for her little superhero family. And what a way to include the Red Guardian and the Iron Maiden!

I know he was part of the Winter Guard which was the Russian answer to the Avengers but ultimately they were superheroes, but also according to the comics, he was acclaimed for his superhero work and also for marrying Black Widow! So transforming him into their adoptive father was interesting. I loved the family dynamic of the spy parents and the sisters being assassins, the dinner/reunion scene, made me giggle to no end.

The cringe parents spew in front of their kids and the kids being super embarrassed of it. It honestly felt like watching my own family on screen. And the Iron Maiden was originally Black Widow’s enemy, who was forced to live in her shadow that developed a deep hatred for Natasha; so making her the adoptive mother was a twist as well.

The playful banter between Yelena and Natasha about the superhero pose was too funny and asked a serious question about why heroes pose the way they do, and I loved it. No doubt inspired by our not-so-friendly neighborhood Deadpool (hopefully to be seen soon in the upcoming movies). The “superhero landing” joke was a reference to both Deadpool movies but had their own twist with Yelena.

Ok, can we also talk about that post-credit scene? First after the movie ended, it made me completely forget that Black Widow had sacrificed herself for her team. It dawned on me the second I saw her tombstone. It hit me like a brick and started crying all over again.

But the second I saw Contessa Valentina Allegra de Fontaine, (as seen from The Falcon and Winter Soldier) I was wracked with rage as she showed Yelena Hawkeye’s picture and blamed him for the death of Black Widow. How will this alter things in the MCU? Val already made John Walker the U.S. Agent and has started meddling with this timeline. How else will this hurt us dedicated fans? How much more heartache must we endure for our love of this universe?

Anyways, on a happier note, I give this movie five stars and also exalt it as a must-see to honor our fallen comrade the beautiful, the deadly, the smart, the lovely Black Widow. She gave her life to honor the Avengers and help her found family bring back the snapped away people of the universe. She had been trying to find a way to redeem herself from the Red Room, and she truly did.

We will always remember you, Natasha Romanoff, we will miss you and always hold a special place in our hearts. The movie had a great pace, it didn’t feel rushed or dragged on and had amazing fighting scenes and always badassary from both Black Widow, Yelena, Melina Vostokova, and the Red Guardian.