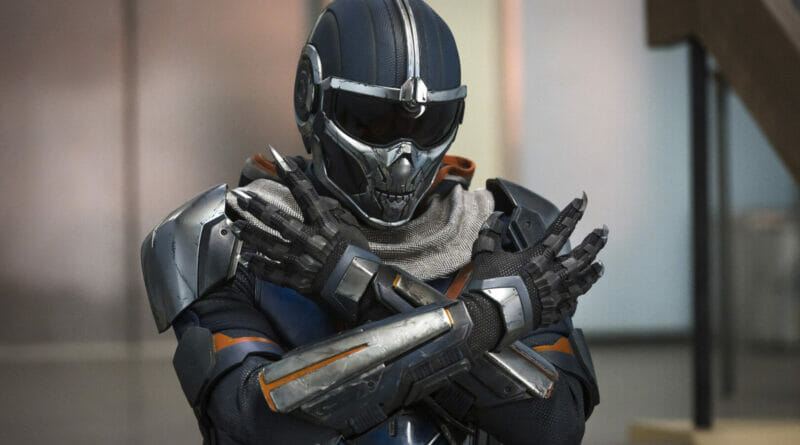 Black Widow: Can The REAL Taskmaster Please Stand up?


**WARNING SPOILERS AHEAD FOR BLACK WIDOW AND THE REVEAL OF TASKMASTER**

Marvel has done it again! If the Mandarin twist from Iron Man 3 didn’t piss you off enough, well Marvel has decided to piss you off again by not giving you the REAL Taskmaster. Black Widow has been the talk of the day and will the talk of the weekend and the week to come. There’s a lot to dissect about the film, especially with the potential of a sequel and where the newly introduced characters can go going forward in the MCU.

Before we get into Taskmaster, we dived into the film’s post-credits scene and what it means for the newly introduced Yelena Belova. Taskmaster was used as one of Black Widow’s biggest marketing tools. With a star-studded cast which included O.T. Fagbenle. Many fans theorized that his casting would mean that we would finally be seeing Anthony Masters in the MCU or at least a version of him. Sadly that’s not the case in the Black Widow film. O.T. Fagbenle is simply an off-the-grid contractor who’s helped Natasha and Clint during their time in Budapest and now again in 2016 while she’s on the run from Thunderbolt Ross.

In the comics, there have a been number of variations of Taskmaster but the main Marvel Universe Taskmaster is Anthony Masters. While the origins of his photogenic reflexes vary from creator to creator in Marvel Comics, the Taskmaster we see in the Black Widow isn’t born with any kind of powers. However, this version of Taskmaster simply has a chip in their neck which allows them to mimic the physical moves of the opponents they are fighting. As we see during its battle with Natasha.

The MCU version of Taskmaster is genderswapped and played by Olga Kurylenko (007: Quantum of Solace, Hitman: Agent 47, Max Payne) and is the daughter of Red Room overseer General Dreykov. Unlike her comic book counterpart, Antonia Dreykov is the unfortunate result of collateral damage at the hands of Natasha Romanoff and Clint Barton as they tried to assassinate General Dreykov. Dreykov was able to save his daughter and was able to get her back up on her feet by implementing a chip inside of her neck, which grants her photogenic powers. Much like the rest of the Red Room’s Black Widows who were under Dreykov’s command, so was his daughter Antonia.

Marvel Studios takes their rightful creative liberties when adapting characters rom the source material into live-action. And while it’s worked for villains like Ultron and Hela. It hasn’t worked so well with characters like The Mandarin from Iron Man 3 (who Marvel is trying to redeem nearly 10 years later with Shang-Chi and the Legend of the Ten Rings),.

The Ancient One in Doctor Strange (who after years of backlash are now owning up to their whitewashed, genderswapped miscast), genderswapped Mar-Vell in Captain Marvel, and now with Antonia Dreykov as a genderswapped Taskmaster with a completely new origin and identity. It’s a continuous adaptation problem Marvel Studios has had more times than they should, especially at this point and time in their cinematic tenure.

Comic book readers are also well aware of the female version of Taskmaster from Deadpool Max who kidnaps Wade Wilson as a child and trains him to be a ruthless killer. I’m sure that’s not where the genderswap idea truly came from in terms of live-action adaptations but here we are. Black Widow ends with Antonia Dreykov/Taskmaster being freed from the mental prison that Dreykov put her in and leaves the scene with Melina, Red Guardian, and Yelena. Where has Taskmaster been all of this time? We do not know but we might see her again down the line as a potential member of The Thunderbolts.