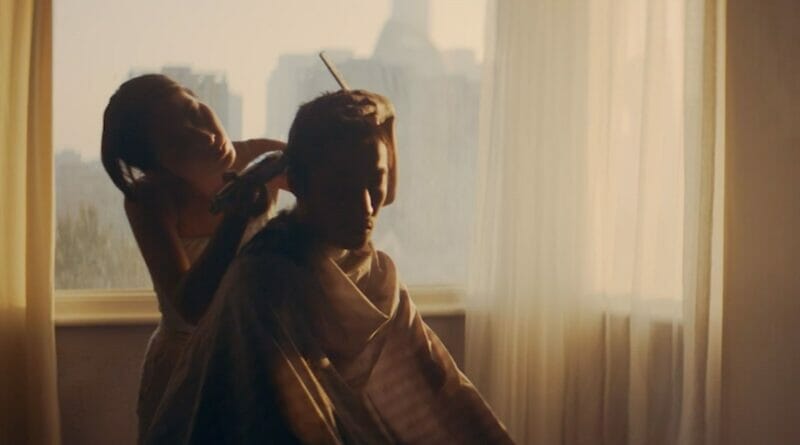 ‘Bubble’ Review: How Much Love Do We Consume Before We Wither Away? (Fantasia Festival 2021)


Bubble marks the directorial debut of Haonan Wang. A film that follows an ordinary couple going about their normal daily routines sharing intimate moments with each other by fully displaying all the little things that matter in a loving relationship. Whether it’s lounging in the same room while one person works on their craft or simply giving your partner a haircut. It’s the little things that matter the most, and Haonan Wang’s Bubble emphasizes that.

But “Bubble” also emphasizes, in a semi-dark, twisted way, how scary and sacrificial love can be. As we follow our young couple and their quick ventures together, we end up finding them having dinner together in a restaurant hidden away in an alleyway. There’s very little dialogue in the film but the silence of the film is utterly deafening as we hear the woman’s spouse crunch on greens. It has a very mukbang/ASMR feel to it as each crunch grows louder and louder. You’re left to wonder “what’s the purpose behind this?” as we spend a lot of time here but as the man keeps indulging in his buffet of vegetables, his spouse shed’s a tear and we see the man turn in a Swamp Thing-like being covered in red flowers. The man is then escorted into the alleyway and is eaten alive by his partner.

As horrific as that sounds, which it ultimately is. The question here is, “how much love do we consume before we wither away?”. It puts it in perspective how much we feed into love to ultimately be devoured, broken, and defeated by it. It’s a sacrifice we all make when we venture into the world of love and intimate relationships. That wild sense of vulnerability and openness, risking and sacrificing our very being to fulfill someone else’s desire. But who here makes that ultimate sacrifice? Is it the man who is just gluttonously eating all of these vegetables to then be eaten by his partner or is it the woman who watches the man eat to then devour him fully flourished? “Bubble” is quite a short film and with its short runtime, it really speaks LOUDLY. It’s hard to do that with a film that’s this short and literally has one line of dialogue but Haonan Wang makes it work and that’s just the beauty of it all.

I think there’s an interesting story here that has the potential to be further explored and one can only hope that this idea is further explored no matter the medium. It doesn’t even have to be the same cast but to further explore this world and the characters and why they ultimately feed on humans is something I’m willing to further invest my time in.