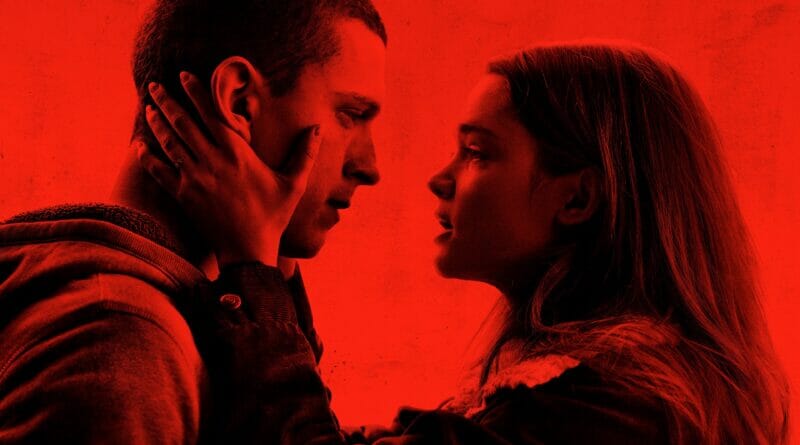 Cherry Review: Cherry Doesn’t Exactly Hit All Its Marks nor Does It Stick Its Landing


Though entertainingly stylistic, Cherry is a confused and unguided drama held together by an outstanding Tom Holland performance. Too fast to be a character study and too shallow to be a blockbuster, The Russo Brothers couldn’t save Cherry from the script’s own woes.

For those of you who haven’t seen the trailer (or were utterly confused by the initial poster), Cherry follows a young veteran as he navigates addiction, PTSD, and his life as an amateur bank robber. As to why it’s called “Cherry” might’ve gotten lost in translation from page to screen. Based on the memoir by Nico Walker, this adaptation is unhinged and at times, deranged. However, Cherry doesn’t deliver the needed introspection that would’ve done Walker’s complex story justice.

As I watched the film, I couldn’t help but think that when Scorsese trashed Marvel, the Russos went, “Yeah, well…what you do isn’t THAT hard!” Seemingly pulling slight themes from Goodfellas and a bit from The Wolf of Wall Street, this jumbled character odyssey doesn’t offer much nuance or depth. The posters and trailer give the idea that Cherry lived a series of different lives as a soldier, a bank robber, an addict, etc. And he does, but each of these transitions of life are held together by paper-thin reasoning.

Why’d you become a soldier? “I was sad.” Why’d you become a bank robber? “I needed money.” These are actual lines in the film to provide a reason for each decision made by Cherry. Sure, bare-bone responses are the foundations for every decision, but the writers refuse to give us anything else. Despite the utilization of voice-over, it doesn’t offer any sort of window into Cherry’s mind. It’s used as a cheap vehicle for one-liners and commentary on a scene (which was definitely not needed a lot of the time).

This is a shame because, with Holland’s performance and The Russo Bros. direction, this film could’ve been so much more. Throughout the film, Cherry’s character remains a mystery that beholds complexity but never shows any of it off. His navigation through his young life can beg so much resonance with veterans and addicts but with its blockbuster feel, it’s wasted on a story set to entertain more than to inform.

That’s not to say it doesn’t have its lessons and messages. Cherry has things to say in terms of the treatment of veterans and the opioid epidemic, but it’s nothing you can’t find in a pamphlet or 10-second commercial. Everything in this film is, I regret to say, brutally surface level.

Despite everything that made Cherry excruciatingly mediocre, a great deal of praise is due to Tom Holland. A performance that held so much emotional weight and displayed the human condition without any help from the script. A complete B-line away from any sort of Disney persona he might be known for. I admired the way he grew his character into the situations he was put in. He had the intensity to be a bank robber, he had the mania to be an addict, he inhabited a variety of unhinged personas to effectively play someone like Cherry.

He filled in a lot of blanks for the character that the script did not provide, like the way he felt about himself, his drive to carry out decisions, etc. This is such an achievement for an actor like Holland that has so much to display outside of Spider-Man. After films like Cherry and The Devil All the Time I can’t wait to see what he tackles next.

Cherry’s look and feel is an accomplishment that added to Holland’s talent and its intent to deliver a fast-paced drama. The Russo Brothers are to thank for the film’s dark presentations of life, but it’s oftentimes not reflective of reality. And that may be the point. You have our principal figure’s outlook on his life and the world surrounding him bleeding onto our screen whether in the form of quippy titles like “Dr. Whomever” or “Sh***y Bank”.

Or even the chapter titles painted blood red as a callback to war or the film’s title. The Russos achieved this feverish pace to the film that might’ve cut some corners but hooked me into every scene. It was a race to the end that heightened anxiety. You knew Cherry’s story was going to come to a screeching halt whether it was death or incarceration. The Russos upheld their end in telling a magnetic story but the script kept its potential bogged down with a need to be fast instead of deep.

Cherry will satisfy casual viewers who are looking for a fast-paced drama. For those of you who can’t look past its formulaic plot and disregard for the character, this one might be a little tough to love. That’s another thing, with Holland’s talent and the film’s eye for beguilingly stylish commentary, this Russo Bros. effort offers a lot to chew on. The film started its theatrical run this past Friday but it will debut on Apple TV+ on March 12th for VOD.