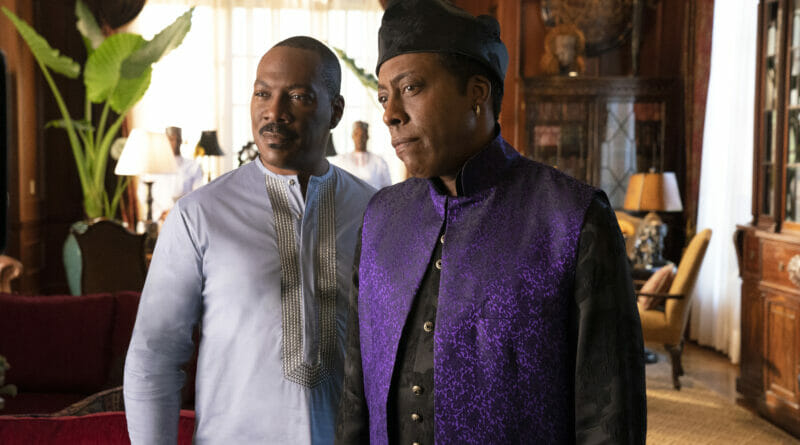 
As far as the usual “I have a long lost child!?” trope in sequels go, this one is the least tolerable. Coming 2 America’s nostalgic reaches can’t save it from being downright forgettable.

I want to take a quick moment in this piece to praise Wesley Snipes. This might be fueled by my frustration with The Academy for not even nominating Snipes for his role in Dolemite Is My Name, but who cares! I’m still mad about that! Anywho, Snipes was, in all seriousness, the most entertaining presence this sequel had to offer. Outshining Eddie Murphy, outshining Leslie Jones (who was a genuine delight). I think he had, at most, 15 minutes of screen time inside the film’s 104-minute runtime.

Despite his under-utilization, he steals EVERY scene he is in. In Coming 2 America, Wesley Snipes plays a cruel and dictator-like figure named General Izzi. Makes sense right? Snipes is known for his intense presence in films like Blade and Demolition Man, but he flips that stereotype on its head with Izzi. I’m sure this character was meant to be played with at least a little bit of intimidation but Snipes made the character into this goofy persona. The way he says his lines with this huge smile, the way he walks sideways, his dance moves it’s all hilarious. His appearance was easily the best aspect of this sequel.

Ok, now that I’ve gotten my favorite thing about this movie out of the way, what does Coming 2 America have to offer? The film reunites Snipes, Murphy, and director Craig Brewer after the acclaimed Netflix biopic Dolemite Is My Name. The basic premise follows Prince Akeem finally taking over his Father’s place as King of Zamunda. Happily married to Lisa with 3 daughters, it’s revealed to Akeem that he must have a son in order to rule the country in line with tradition.

Akeem’s like “ I don’t have a son” and that’s when the supporting characters collectively make that face like “Uhhhhhh… who’s gonna tell him???” Then, we cut to Jermaine Fowler’s character who lives in Queens, New York with his mother (Leslie Jones) and his uncle (Tracy Morgan). Then Akeem says “We must go back to America!” *barf* What I found really funny was the fact that about 10% of the movie takes place in America. Isn’t that ridiculous? I mean, I get it, it’s the title! But come on everybody.

My biggest grievance with Coming 2 America isn’t with the performances or the film’s directing, for the most part, everybody held their own. My main point of frustration comes from how lazy this movie is. Sure, nothing’s wrong with “Let’s make this sequel and make some money!” However, when the final product is this leashed and this hollow, it’s just disappointing. It has funny moments and the character’s personalities are somewhat preserved but none of that saves it from the fact it’s a scene-for-scene remake. With Akeem being king and the urgency for his son to marry someone he doesn’t want to, it’s all just way too on the nose.

It’s more than formulaic, it steals its own original premise while adopting the usual ridiculous “You have a son!” trope. Watching the film, I couldn’t help but notice that Akeem’s presence was constantly being outshined. Don’t get me wrong, Eddie Murphy is definitely present with his variety of costumed personas, but Akeem himself feels almost invisible. He has lines, he’s in many of the scenes but in the end, it doesn’t seem like he had much of a role in the overarching narrative. Its lazy narrative doesn’t match the budget it got either.

The first one, for the most part, takes place in New York, which doesn’t require a gigantic budget. In Coming 2 America, you have these grand sets with a CGI lion, extravagant costume designs, and big-name cameos all for a story that isn’t exactly worth adding to the original movie. Despite its extensive list of losses as a sequel, the film has a healthy serving of heart. The family values and themes are endearing and thanks to Snipes and Jones, there are some genuinely hilarious.

Coming 2 America will be available for streaming tomorrow on Amazon Prime Video.