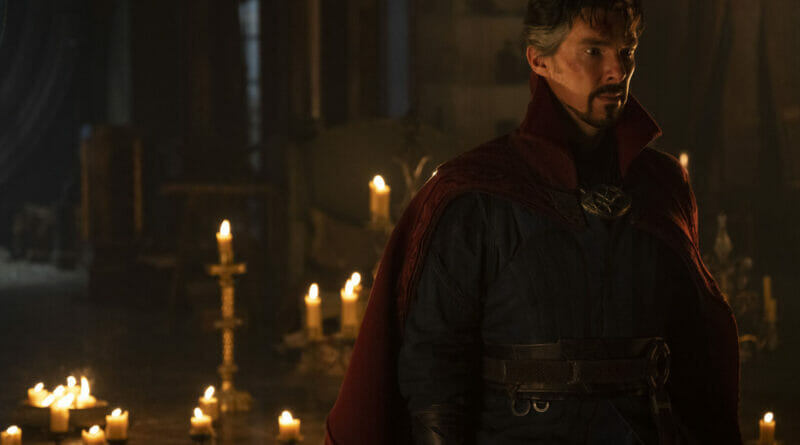 ‘Doctor Strange in the Multiverse of Madness’ Spoiler Review

The highlight performance in this movie is our villain Wanda Maximoff, played by Elizabeth Olsen. She is everything you want in an antagonist. She is sympathetic in her reasoning for doing the things she does but even at her emotional moments she is still intimidating. She just gives out a sense of foreboding every time she shows up. Elizabeth Olsen gives her all to this character. You know she has to be stopped but you also want her to succeed. I do think the resolution in the third act for this character was solved a little too quickly? She gets reunited with her children from a different dimension but by seeing how much they fear her, she realizes the monster she has become. She killed so many people in very gruesome ways.

She was willing to kill a young girl for her powers so she could get to her kids and have a cure for any ailment her children could ever get. She was even prepared to kill her other-dimensional self so she could have her children with her. I just feel like Wanda’s story does not end in a very satisfying way. The MCU usually struggles with its villains so seeing such a great one on screen is refreshing. She felt like a force of nature that our protagonists had to run away from because she was too powerful to stop.

Sam Raimi really shows off his horror roots in this sequel. The way he portrays Wanda as a horrific terminator of a witch was amazing. From the creepy camera movements to the use of Wanda’s powers appearing behind a man to whisper ideas in his ear. She could not be stopped and when she is chasing after the main characters you just feel a sense of dread.

Benedict Cumberbatch comes back as Stephan Strange who is always amazing in his portrayal of Doctor Strange. He is the only actor that I could ever picture playing this character. In Multiverse of Madness, he has to play different versions of himself from different universes which takes a lot of range. He was also sympathetic in his love for Christine played by Rachel McAdams. It’s heartbreaking that in every universe he visited, he and Christine were just not meant to be. He has to yearn for what could have been. It was also fun seeing Benedict Wong as Wong in a more leadership role as sorcerer supreme.

America Chavez who is played by Xochitl Gomez felt like a missed opportunity here. While her powers are visually interesting to look at, her character feels a little diluted. America Chavez stood out in the comics because of her edginess and her authentic representation of urban Latino culture. In the comics, America Chavez is an older cosmic hero adopted by a Puerto Rican family and proudly claims their heritage as her own. Xochitl Gomez is Mexican-American and while she is in the LGBTQ+ community like her character, she does take away a role that could have been given to a Puerto Rican actress.

With a franchise already lacking in diversity, it’s important to find the correct representation portrayed in the comics. Since the character is now Mexican I hope we get more Hispanic culture in the future as well as more Latino/Latina representation in the MCU. In this movie, America Chavez doesn’t get a chance to shine aside from the cool VFX from her powers. I appreciate that she’s the only one that can cross dimensions which makes her gift uniquely hers. Strange and Wanda have to come up with inventive ways to cross dimensions without being there physically which is interesting to witness. America Chavez just felt so sidelined in the last act that it was disheartening to see. I do believe that Xochitl Gomez as Chavez has plenty of room to grow with her character in the future.

The music for the film is written by Danny Elfman who does an excellent job with his work on this movie. He has worked with a bunch of Sam Raimi’s films before like ‘Spider-Man’, ‘Spider-Man 2’, and ‘Oz the Great and Powerful’. I loved his musical theme for Doctor Strange as well as Wanda’s. They both have a magical quality too; with one more foreboding than the other. The VFX is impressive for the most part. I think it fumbled a little with the creature known as Shuma Gorath in the beginning. It just didn’t look believable that they were actually fighting the monster. Besides that though the magic is trippy yet beautiful to look at.

The zombie Doctor Strange was also visually creative. There were stunning visuals in this film. It just feels so different from a normal Marvel movie that it was refreshing to watch. As for the writing by Michael Waldron, this is where I feel the movie fumbles a little. I just feel like the script should have been worked on more. Especially where America Chavez is concerned. The third act is wrapped up quickly near the end and it just feels a little unfinished. There are also missed opportunities with characters that could have been better utilized if more care were put into the characters AKA the Illuminati. I also wish the movie could have been longer to flush out the emotional beats of the film.

As for the Illuminati, I was both delighted and a little disappointed. The audience is introduced to the group which consists of alternate versions of Karl Mordo who is in this universe of the Sorceror Supreme, Maria Rambeau (Lashana Lynch) who is Captain Marvel, Peggy Carter (Hayley Atwell), as Captain Carter, Black Bolt (Anson Mount), Professor Charles Xavier (Sir Patrick Stewart); and Fantastic Four leader Reed Richards (John Krasinski). When we all saw these characters the whole audience went wild and rightly so. Everyone looked so good like they jumped right off the comic books. The costume design was magnificent. Hearing the X-men theme song as Professor Charles Xavier came into the scene gave me goosebumps. I just wished they were better utilized.

I don’t mind Wanda annihilating The Illuminati. I just wish we could see more of them in action. We got to see Black Bolt using his vocal prowess which was handled much better visually this time around; and as for shock value, his death was gruesome as well as effective. As for Reed Richards, we didn’t get to see him utilize his powers at all other than stretching down into the frame to talk to Wanda before he was quickly taken out.

He was the face of the Illuminati and even was married to Sue Storm with kids in this universe. This means he has been a hero for a while so him barely utilizing his powers in this standoff and even accidentally telling Wanda how to defeat Black Bolt was idiotic. The scene was disappointing to witness because fans were so excited to see John Krasinski as Reed Richards for so long. His character being so quickly executed was disheartening to see.

At least Captain Carter and Captain Marvel had an interesting fight with her. Captain Carter saying Steve Rogers’ iconic line made me smile wide. Professor Xavier, I wish they did a little more research on how powerful Charles Xavier is before his anti-climactic death. Professor X is supposedly one of the strongest mutants, certainly at his age and experience level.

Even though Wanda is powerful, it shouldn’t in any way be that easy for her to defeat Professor X. His line: “Just because someone stumbles and loses their way doesn’t mean they’re lost forever., warmed my heart because it was said in ‘X-Men: Days of Future Past’ and because it also pertains to Wanda thoroughly. Wanda is in pain emotionally as well as being corrupted by the Darkhold. She just wants her kids because without them she is consumed with grief and loneliness.

The post-credit scene is of Charlize Theron as Clea Strange who confronts Doctor Strange and after a brief exchange, opens up a portal to the Dark Dimension Strange turns to the camera and opens his third eye and the scene ends. Seems like there’s more than meets the eye here with Stephen and Clea but we will have to wait and see that unfold later on. For those who are unaware, Clea is a Faltine/Humanoid Hybrid being from the Dark Dimension, the niece of Dormammu, sorceress, lover, and eventual wife of Stephen Strange, ultimately taking up the mantle of Sorcerer Supreme. Needless to say, Clea ain’t nothing to play with!

Overall even with my critiques, I have with the film I still really enjoyed watching Doctor Strange in the Multiverse of Madness. Wanda is a three-dimensional villain who you can sympathize with. Doctor Strange is a hero who you can root for and who experiences growth by the end of the movie. The magic is visually beautiful as well as creative. The music sets the tones whether it’s to unsettle or mystify what’s on screen. The horror aspects Sam Raimi brings to this movie really work and set this movie apart from others. As a Marvel horror movie it definitely delivers on so many levels, although not as dark as Raimi could’ve gone, given the MCU sandbox, they found a way to make it work.

‘Doctor Strange in the Multiverse of Madness’ is now playing in theaters.