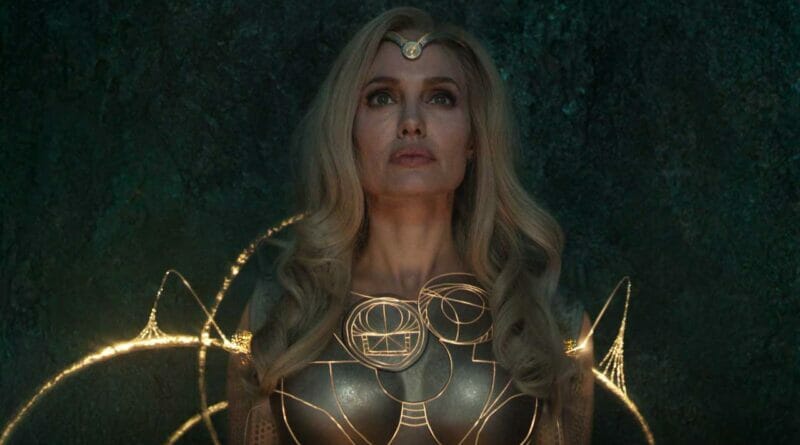 Marvel Studios’ “Eternals” is enormous and even the word enormous is a severe understatement, given how much lore and “explaining” this film has to do. This film is so massive in both scale and story that it has become the second-longest film in the MCU, next to Avengers: Endgame clocking in at two hours and thirty-seven minutes. Eternals has to serve as an origin film of our titular group of antagonistic heroes but also serve as a filler film for the MCU, having to explain why the Eternals have never interfered in human conflict throughout millennia. Even when facing the likes of one of their own in the form of The Mad Titan Thanos.

Unlike the Eternals, the Deviants were given free will. Ultimately evolving to the point of revolting against their creator. Thus laying the groundwork for the Eternals to be created without the choice of free will and without the ability to evolve thus restricting them from ever turning on their creator. The film hits the ground running with its biblical themes and exploration of mythology which is seen all throughout the film, its main characters, and the film’s setting. Most notably Babylon.

The film spends the majority of its run time giving the viewer a heavy-handed dose of exposition that might keep some viewers locked in or turn others away. With very few action sequences in between. However, when we do get those action sequences, they also hit as hard and as heavy as the exposition you have to endure to get there. A lot of the action comes at the behest of getting the band back together as Prime Eternal Ajak is killed. Knowing that the Deviants are still alive and kicking the Eternals get back together to put an end to the Deviants once and for all.

Eternals also hands you a heavy dose of family drama filled will interfamily tension, love, grief, and mourning. This is where the cast truly shines. Playing well with their on-screen chemistry and the film’s underlying tones of mental health, enslavement, and free will. Each of the Eternals’ distinct personalities, whether meshing or clashing, makes for a great and engaging watch as they all come to the realization of the lies they have been told for the millions of years they have been alive. That they were nothing more than just pawns doing their master’s bidding.

What makes Eternals stand out from the rest of the MCU films isn’t all of the hard-hitting action in the film. Which are too far and in between, and when we get them they’re extremely short-lived. That’s up until the third act and the final battle between Ikaris and his fellow Eternals. What makes Eternals truly stand out is Chloe Zhao’s vision and ability to create a visually immersive film. Her decision and urge to use real-world locations for the film’s setting truly compliment the film in ways we haven’t seen in the MCU before. Who’s most film settings are drowned in CGI.

Not to say that other MCU films aren’t beautifully shot, they are but there’s a certain appeal and beauty to real-world settings being used to create the universe you are being taken into. In addition, the Eternals has the most diverse MCU cast since the franchise’s inception. Featuring an ensemble with leads of color, women, the first disabled superhero, and the first openly gay superhero, in an openly gay marriage who are also raising a child; and who also share an on-screen kiss. One of the boldest MCU choices to date, however, was to feature the MCU’s first on-screen sex scene.

If there are any complaints about the “Eternals” is that it bites off more than it can chew. Despite being a coherent story that can be easily followed, even by those who aren’t familiar with the small number of Eternals comic book source material. Eternals is truly a large pill to swallow and that is probably its biggest detriment. The massive scale of this film, despite all that it crams into it, doesn’t truly allow for any of these characters to be fully realized with their respective arcs and goals. More often than not sidelining a good portion of the group for a good chunk of the film and focusing on a select bath of others.

This is more prominent during the third act when Sprite is sidelined for the majority of the final battle and Kingo is taken out of the picture completely only to reappear after the dust has settled. Another character who suffers this same fate is Kit Harrington’s, Dane Whitman. Who spends the majority of the film off-screen reconnecting with his family, only to not fully pay off in the end.

The short-lived action sequences are probably my biggest gripe with the film as I would’ve enjoyed a much longer, mental, physical, and emotional battle between the Eternals themselves. However, when it’s all said and done “Eternals” is a worthy entry to Phase 4 of the MCU and further opens up the cosmos to be further explored in the MCU. The introduction of Eros aka Star Fox, brother of Thanos, played by One Direction’s Harry Styles is a welcomed addition to the team and perfectly sets up the film’s sequel as Sersi and Phastos are taken captive by Arishem.

Further setting up the film’s sequel and potential Disney+ spin-off series is the introduction of the Ebony Blade and Dane Whitman being in possession of it. Further teasing the impending introduction of his heroic alter ego the Black Knight. Marvel has managed to deliver one of the biggest post-credit teasers in a very long time. Probably since the end of Avengers: Age of Ultron, and probably since the first Iron Man film.

As Dane Whitman is about to touch the Ebony Blade, we hear a man off-screen speak to him. Now, this could be our first live-action tease to Mahershala Ali’s Blade or the first teaser to Jeffrey Wright’s live-action debut as Uatu The Watcher. There have been multiple reports about characters from Marvel’s “What If..?” characters making their live-action debut in “Doctor Strange in the Multiverse of Madness” and this Eternals post-credit scene could’ve been exactly what Marvel Studios might have just hinted at. However, Blade seems like a more logical setup than Wright’s Uatu.