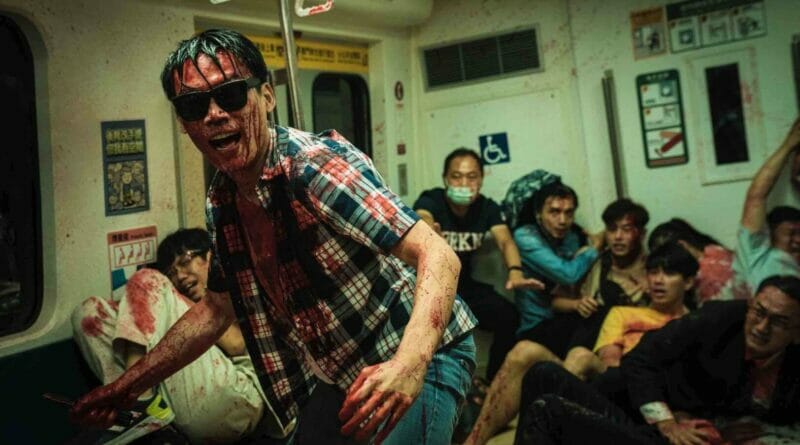 The Fantasia International Film Festival brought its 25th edition to a close on Wednesday, August 25th with the sold-out in-person screening of Takashi Miike’s THE GREAT YOKAI WAR – GUARDIANS, bowing for its International Premiere at the festival, and the unveiling of this year’s esteemed award winners. Once again responding to the impact of the COVID-19 pandemic, Fantasia took up a hybrid format for the 2021 festival, returning to Festival Scope and Shift72 for our Canadian geo-locked virtual component and holding in-person screenings at Montreal’s historic Cinéma Impérial and the Cinéma du Musée.

Across our digital and physical screenings, the festival boasts over 100,000 in viewing numbers that include ticket sales, badge purchases, and streamed events. More than a record-breaking 500 journalists from around the world were accredited for Fantasia, which also saw a heightened industry presence with numerous distribution and sales acquisitions being announced out of the fest, including pick-ups by Shudder, Utopia, and Oscilloscope Films, and sales acquisitions by XYZ and Vanishing Angle.

In addition to films, the festival presented a slate of virtual events accessible from anywhere in the world, notably headlined by masterclasses given by boundary-pushing Japanese filmmaker Shunji Iwai and Oscar-winning stop-motion animator and filmmaker Phil Tippett, who were honored with a Career Achievement Award and a Lifetime Achievement Award, respectively. Additional highlights include a masterclass from legendary filmmaker and artist Stephen Sayadian, a panel on South African genre cinema, a talk on Indigenous horror works, and MONSTERS MUST LIVE!– presented by Untold Horror, featuring filmmakers Brian Yuzna, William Malone, and Richard Raaphorst discussing unrealized projects from their past.

In-person guests to Fantasia’s latest edition included writer/director Rob Jabbaz, who attended the North American Premiere of his explosive feature debut THE SADNESS, which earned him this year’s New Flesh Award for Best First Feature; and Mark O’Brien and Henry Czerny for the World Premiere of O’Brien’s celebrated feature directorial debut THE RIGHTEOUS, which was awarded Best Screenplay by our Cheval Noir jury.

In addition, the festival hosted the international premieres of Tsutomu Hanabusa’s TOKYO REVENGERS, Igor Legarreta’s ALL THE MOONS, Stef Lernous’ HOTEL POSEIDON, and Josef Kubota Wladyka’s CATCH THE FAIR ONE, as well as celebrated screenings that helped launch Rob Jabbaz’s THE SADNESS and Junta Yamaguchi’s BEYOND THE INFINITE TWO MINUTES to exceptional critical and audience praise.

Closing out the festival, which launched on August 5th with the world premiere of Quebec zombie feature BRAIN FREEZE and a special screening in-celebration of Fantasia on August 4th of James Gunn’s THE SUICIDE SQUAD, both taking place the Cinéma Impérial, Fantasia is proud to publicly announce our award winners for 2021, including the prestigious Cheval Noir Competition, New Flesh Competition For Best First Feature, The International Short Film Competition, AQCC-Camera Lucida Competition, Axis Competition – Satoshi Kon Award for Excellence in Animation, and the Audience Awards.

The 2021 Cheval Noir jury was presided over by award-winning Polish filmmaker Agnieszka Smoczyńska, director of the 2016 Sundance breakout THE LURE, which was awarded a Cheval Noir Special Jury Prize at Fantasia for “being a timeless cinematic fairytale – an instant cult classic!,” and the 2018 Cannes’ Critics Week selection FUGUE.

“We gave the award for best film to VOICE OF SILENCE, for the quality of its craft as well as its unparalleled ability to surprise. In a film festival that’s known as a melting pot of genres, VOICE OF SILENCE feels like an excellent representative for the top prize in the Cheval Noir section. It’s earnest and sincere in tone but also unpredictable and experimental, impossible to pin down, and truly idiosyncratic. Put simply, it’s unlike anything we’d seen before.”

“The jury wants to highlight the beautiful work of this director, who has managed to capture poetic horror with pictorial precision. The award for best director goes to Igor Legarreta, director of ALL THE MOONS.”

“Fantasia’s Cheval Noir award for the best screenplay goes to Mark O’ Brien for THE RIGHTEOUS, for its compelling and intense script which investigates grief, compassion, faith, love, self-doubt and madness, all the things, therefore, that make us the creatures that we are, that make us human.”

“The jury is thrilled to present the award for best score to a very talented family, in front of and behind the camera. The award for this nightmarishly cool music goes to John Adams for HELLBENDER.”

“With a lot of extremely strong competition, Yoo Ah-in’s non-verbal performance blew us away. Communicating a vast wealth of emotion with physicality alone, he provides clarity that anchored us among the film’s many swerves and obfuscations.”

“The power in her performance and her overwhelming presence confirm the award for this young actress. The award for best actress goes to Zelda Adams, the main character of HELLBENDER.”

“The jury decided that we absolutely must give a Special Mention to Imanol Nabea for their cinematography on ALL THE MOONS. It’s expert visual narration, through beautiful light and evocative camera movement, just blew us all away. It was a highlight of an already exquisite work.”

“Her captivating performance both broke and chilled our hearts. The jury unanimously wishes to acknowledge this talent to watch with a Rising Star award for Sienna Sayer from MARTYRS LANE.”

“We felt that the sound design of HOTEL POSEIDON deserved a particular shout-out, paramount in the film’s visceral experience. The blurring of the line between score and sound effect proved particularly haunting for the jury!”

The New Flesh jury, which awards debut feature films and their creators, was presided over by UK author, critic, and broadcaster Kim Newman and comprised of Jill Gevargizian (THE STYLIST), Gigi Saul Guerrero (Blumhouse and Hulu’s Into The Dark entry CULTURE SHOCK, upcoming BINGO HELL), Brian O’Malley (LET US PREY, THE LODGERS), and Myriam Sassine (Co-Founder of the Maskoon Fantastic Film Festival and producer of AMAL, A SON, ALL THIS VICTORY).

“We are pleased to present THE SADNESS with the New Flesh jury award! Though the jury had their jaws dropped to the floor, they were incredibly impressed with such a slickly produced rampage of gore. A wild ride that doesn’t stop! Sadists, cannibalism, lust… one could say it has been a while since a film has managed to horrify and scare them at the level this film did. THE SADNESS was not afraid to take risks and go beyond any infection film we have seen to date, touching on political themes that our world isn’t too far off of, but still maintaining thrilling entertainment for the viewer. Congratulations to the entire team of THE SADNESS!”

”BEYOND THE INFINITE TWO MINUTES receives a special jury award for its ‘outstanding achievement in filmmaking’. Remarkable in both its mind-bending concept and its expert execution, the whole jury marveled at the sheer cinematic brilliance of this magnificent contribution to the time travel genre.”

“A feast for the eyes, OFFICE ROYALE is a bonkers and hilarious debut film which we are awarding with a special jury mention. Its intensely feminine aesthetic mixed with extreme violence and gore is as thrilling as it is refreshing.”

“The direction, visuals, editing, narration, and performances from the two main actors combine to

create a deeply powerful cinematic experience. It’s a playful, clever portrait of humanity’s beauty, flaws, and fascinating destructive impulses. We were particularly taken back by the chaotic side of the film.”

”A beautifully paced script that taps into our need for connection whilst gracefully allowing us into the character, painting her needs, desires, and vulnerabilities through the action, story, and behavior of others. This is a really smart and neat concept, skillfully executed, which builds us up only to crush us emotionally.”

“From the moment she first appears on screen Victoria Villier makes you feel like you’ve known her for years. Her performance is pitch-perfect, entirely grounded in truth, and absolutely captivating to watch from beginning to end. With just one look she can make you feel for her, fear for her, and make you want to see everything else she’ll ever be in.”

“Ian Cramer manages to suck you into his tale and slowly tighten his grip on you throughout the entire movie. Much like he does to the protagonist, he leaves you feeling seduced, haunted, depraved, and, quite literally, breathless.”

“For its fun and efficient establishment which leads to relentless suspense, congratulations to the directors Lucas Paulino & Ángel Torres and actress Belén Rueda for having achieved the challenge of creating such tension in just a few minutes!”

“For its contemplative atmosphere, its fantastic cinematography in which reality collides with surrealism, and its portrait of evaporating cultures, the AQCC-Camera Lucida jury gives its award to the Malaysian film THE STORY OF SOUTHERN ISLET.”

“For the progressive affirmation of a cinematic identity, the AQCC-Camera Lucida jury decided to give a mention to the Filipino film MIDNIGHT IN A PERFECT WORLD.”

“This film is a psychedelic paean, it is a modern and fascinating mythological painting, and it is also a strong political metaphor.”

“The jury mention award goes to FORTUNE FAVORS LADY NIKUKO because of its creative storytelling and stunning animation.”

”This film instantly stuck too me in terms of its graphic style. Lovely visuals and brilliant portrayal of haunting experiences with the use of humor.”

“This film is about a dog’s feelings during midnight. The author’s sense of humor and the creepiness of the environment elicits a strange and fantastic emotion in the viewer.”

“Because of the important message of the film, its outstanding animation, and music.”

Since 2005, the L’Écran Fantastique Award has been awarded to a standout genre film as part of the Fantasia International Film Festival. The magazine L’Écran Fantastique, which has been published for 52 years, is distributed throughout Europe and in Quebec. Yves Rivard, who presents the annual award, has been the Canadian correspondent since 2001.

“The 2021 Prix L’Écran Fantastique is awarded to Phil Tippett’s animated feature MAD GOD. In addition to being an uncompromising work, the film seduces with its waking-nightmare qualities. Delirious, baroque, cruel, inventive, this film, visibly influenced by creators such as Lovecraft, Bosch, Jules Verne, Svankmajer, and Kubrick (!), perfectly embodies the spirit of Heavy Metal, so dear to a large segment of fantasticophiles. We’re betting that with each viewing, new answers will be given to the many mysteries of its narrative.”