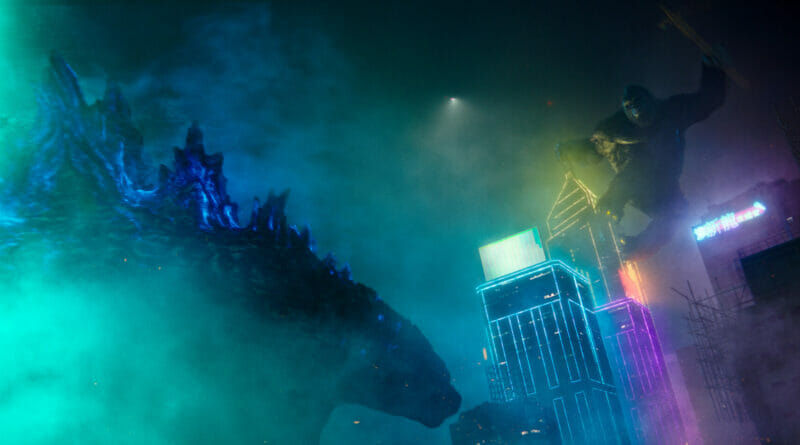 
**WARNING THIS ARTICLE CONTAINS SPOILERS FOR GODZILLA VS KONG**

The most anticipated Titan clash of 2021 from Warner Bros. and Legendary’s MonsterVerse saga of films and its fourth film Godzilla Vs Kong is finally out in theatres and is available to stream on HBO Max wherever available. Godzilla vs Kong is directed by Adam Wingard (Death Note, Blair Witch). The movie opens up with a light-hearted scene with one of our titular Titans (Kaiju) Kong.

The scene briefly shifts and takes a serious turn to make the audience aware that Kong is no longer a free titan and is being held against his will by Monarch. Who has built a Bio-Dome on Skull Island, which can create and stimulate an artificial environment around Kong giving Kong the illusion that he is no longer surrounded by humans and that they have finally left him alone.

While Monarch and Apex have been secretly studying Kong’s behavior. Throughout the movie, we get to see Kong chained, sedated, and aerially dropped from one place to another. Meanwhile, we have Godzilla wrecking Apex Facility in Florida. After the first clash between Godzilla and Kong, the humans force Kong to submit and take Kong to Antarctica which is one of the entry points to Hollow Earth.

Amidst all of this, we get to know Jia, as she is one of the last survivors of the Iwi tribe and is the only way humans can communicate with Kong. On the other hand, we have Bernie (Brian Tyree Henry) who is deadset on finding and revealing all of Apex Company’s evil plans and why Godzilla is on a sudden rampage. Bernie reveals all of this through his TITAN -TRUTH PODCAST. We are once again reintroduced to Maddison (Millie Bobby Brown) who also believes in Bernie and joins him on his journey to discover the truth behind Godzilla.

Kong finally leads the group of scientists headed by Dr. Nathan (Alexander Skarsgard) into the Hollow Earth, a shrine and the home of the titans, which has a twist to the gravity, and there are some amazing moments in this particular set piece dedicated to the fans of Kong for a brief period of time., and brings some of similar creatures we have seen earlier in Kong : Skull Island and we see Kong battle them out and we are given a scene on to why Kong is hailed as the King of Hollow Earth and its majestic titan creatures.

The power source in Hollow Earth that Apex and Dr. Nathan came searching for is finally found, when Kong finally charges up his battle axe with it, Apex CEO has secretly ordered his team of scientists led by Maya (Eiza Gonzalez) to extract the power source’s signature and she successfully transfers the signature back to Apex facilities in Hong Kong. Maya and the rest of their team get killed when Godzilla attacks Hollow Earth from the surface unleashing a whole horde of creatures present below.

Walter Simmons (Demian Bichir) orders Ren Serizawa to use the power source to charge up the Mecha Godzilla, which can be controlled telepathically through the neural network uplinked to the severed as King Ghidorah’s Skull. if any of you are wondering who is Ren? Ren is the son of Ishiro Serizawa, who sacrificed his life for the greater good while waking up Godzilla to lead the attack on King Ghidorah in the Monsterverse third entry Godzilla: King of Monsters (2019).

A highly enraged Kong returns to the surface with his battle axe and engages in a massive battle with Godzilla amidst the skyscrapers of Hong Kong, Kong can deflect Godzilla’s breath with his axe and does deliver his blows from time to time, but falls short and is beaten nearly to death in the hands of Godzilla. At the same time, Ren fires up Mecha Godzilla, despite his initial worries about not being able to completely control the mecha titan, his worries are proven true when Ren gets electrocuted and loses his life.

Mecha Godzilla goes completely berserk and kills Walter Simmons while breaking out of the lab and going to Hong Kong and takes the entire battle to the completely worn out Godzilla.

Godzilla doesn’t stand a chance against Mecha Godzilla with its full arsenal of weapons, Hollow Earth energy, and Metallic Shell. Maddison (Millie Bobby Brown), Bernie (Brian Tyree Henry), and Josh (Julian Dennison ) start to find ways to shut down the Mecha Titan from the labs. Dr. Nathan and Ilene Andrews (Rebecca Hall) are able to revive Kong with the help of Jia. She persuades Kong to help Godzilla in the ongoing battle with Mecha Godzilla and convinces Kong that he is their only hope to fight the Mecha titan before it completely destroys everything.

At first Mecha Godzilla proves to be more powerful than the two iconic titans combined., but thanks to Bernie and Josh quick work, it gives our beloved Iconic titans a moment of time and Godzilla quickly charges Kong’s battle axe as Kong lays all the final blows on Mecha Godzilla tearing it up limb by limb. If you expected one of the titans to fall victim to the other you’re looking to be disappointed.

The film knows its strength and sticks to them completely. Jia and Kong are the main heart of the film, all the human stories would have worked a little better with a better backstory and better sense of motivation. The actors did their best with what they were given and deliver them perfectly. Junkie XL’s score works brilliantly throughout the entirety of the film and it just makes every scene better and better. Adam Wingard was in his elements throughout the movie and delivers his best for the audience and satisfies both the fans of Godzilla and Kong completely.

There are no post-credit scenes after the movie, but the movie does set up enough plot points for the chances of a sequel. Godzilla Vs Kong is out in theatres and is available to stream on HBO MAX for 31 days at no additional cost.