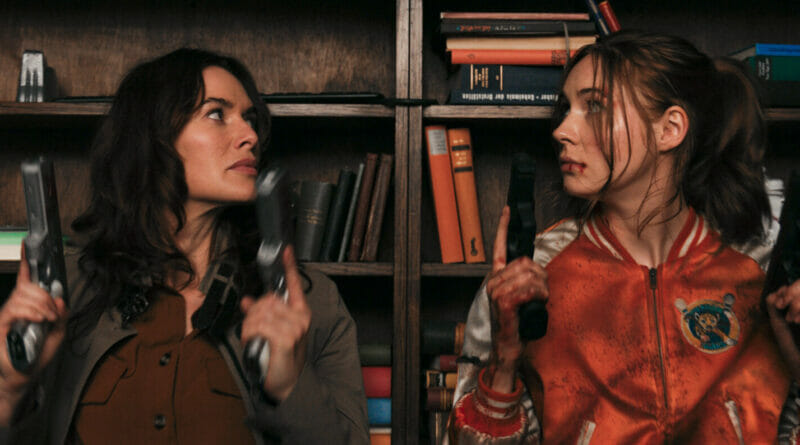 GUNPOWDER MILKSHAKE REVIEW: A Stylic Film & A Stellar Cast Fails to Sail Over The Shores of Boredom


Gunpowder Milkshake’s beautiful style and the stellar cast fail to sail over film over the shores of BOREDOM.

“GUNPOWDER MILKSHAKE” is directed and co-written by Israeli Filmmaker Navot Papushado (known for “Big Bad Wolves”) and the moves forward and unfolds in a Neon Light dominant action dreamscape of a city, that completely feels like a Quentin Tarantino theme park, but Netflix’s version. The movie opens up with Sam (Karen Gillan ) in her preteens waiting to meet her mother Scarlet (Lena Headey) in a diner for one last time, before her mother dispatches a Russian villain and disappears for 15 years conveniently.

Scarlet is now working for THE FIRM, a shady mob organization that reminds you of John Wick’s High Table, whose executive officer Nathan played by Paul Giamatti. Nathan helps with Sam’s upbringing as he is left in his care after her mother disappears. Sam grows up to fill her mother’s shoes and to make sure that the audience is well aware of this Sam puts it out “THE FIRM has been running things for a long time, and if things go wrong and when they need someone to clean up their mess, they send her in”.

Cut to the present day, THE FIRM requires Sam to kill the son of a powerful mobster and then threaten the accountant who is on the run stealing large chunks of money from THE FIRM. Turns out that the accountant’s daughter Emily (Chloe Coleman) is kidnapped and he is using the money as ransom to get her back. As predicted things go wrong in every predictable way possible leaving Sam and Emily on the run from the mobster gang and The Firm.

Amidst all of this Sam reunites with her mother in the most convenient way possible and finds a temporary haven in an antique library, which conveniently has various loot and weaponry stored within its books. The library features a group of women consisting of Michelle Yeoh, Carla Gugino, and Angela Bassett. An ex-assassin group known as The Librarians, who Scarlet, Sam’s mother was once a part of.

The Librarians don’t accept Scarlet at first since Scarlet disappeared years ago, without leaving a word for her fellow assassins back in the day. You wouldn’t be on the lookout for emotions and incredible plot and character development when you are having a 10-year old apprenticing to a bunch of assassins., What the movie offers for its viewers is overly stylized sets with a little nostalgia sprinkled all over with heavy soundtracked violence with lots of slow motion.

Even the action set pieces that were teased all through the promotional campaign fall flat while watching and are a big letdown. Karen Gillan and others sure give their best with what’s offered to them, but Karen Gillan shines a little brighter than the others as most of the action is centered on her. In the end, “GUNPOWDER MILKSHAKE” doesn’t rewrite the rules of any action cinema nor does it entertain the audience, the movie fails on all fronts despite the stellar talents that are present ON and OFF the camera.