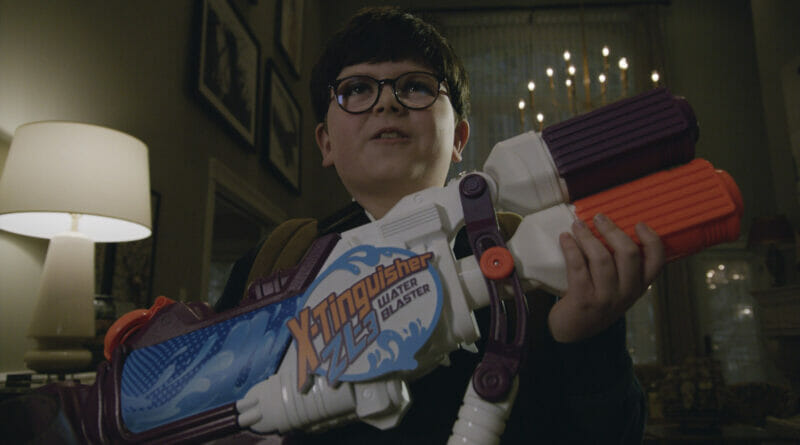 
Home Sweet Home Alone fails miserably at trying to capture what made “Home Alone” such a special franchise. Falling flat on its face and losing every ounce of potential Christmas spirit it tried to encapsulate.

“Home Sweet Home Alone” was released this past Friday as part of Disney’s Disney Plus Day celebration. The film is directed by Dan Mazer. The screenplay is by Mikey Day & Streeter Seidell, story by Mikey Day & Streeter Seidell and John Hughes (Home Alone) based on a screenplay by John Hughes. The film follows 10-year-old Max Mercer who is accidentally left behind during his family’s holiday vacation to Japan, thus finding himself Home Alone. Max now has to protect his home from a married couple who are dead set on invading his home in order to retain their family heirloom in order to sell it thus fixing their financial problems.

The Home Alone formula is quite simple, a mischievous kid who is way too creative for his own good doesn’t get along well with his family, gets tired of their crap, and gets exactly what he wishes for. Chaos then ensues as said kid has to now protect his home from invaders/trespassers/thieves, etc; again, quite simple, but “Home Sweet Home Alone” goes well out of its way to make this simple formula quite difficult, annoying, obnoxious and overall cringe-worthy.

From the moment the film starts and we are introduced to the overabundance of obnoxious characters, including our main character Max. His overdramatic mother and all the “I know I’m too old to be considered cool, but let me try to impress the younger” jokes that absolutely make you want to barf. None of the characters we are introduced to have charm, no one of them is even entertaining to watch. Even the reasoning behind the married couple invading the Mercer household was to put it plainly, dumb. Archie Yates who plays lead character Max Mercer is as dull as an overused kitchen knife.

There’s nothing about the film that truly stands out. Even the “smart adults” are as dumb as a donkey and more obnoxious than the kid who’s accidentally left behind. Even the traps that Max sets up around his home aren’t as creative as the traps that we have seen in previous films. One trap in particular, which was the off-brand coke mixed with mentos gimmick that’s widely seen across all of Facebook, Instagram, Twitter, and more notably TikTok was probably the least creative one of all. It simply screamed out “I watch too many TikTok videos and I need to make sure the young kids watching know where Max got this idea from”.

Outside of the lack of creativity and utter pointlessness in the plot. One thing that bothered me to my core was Ally Maki’s character, Mei. Who is a woman of color used to essentially mock other people of color with her obnoxious use of the Spanish language. I’m all for other cultures or races learning someone else’s language but the script writes a woman of color this bad and openly mocks the Spanish language it simply comes off as tone-deaf.

But then again coming from the writers of Saturday Night Live, “Home Sweet Home Alone” felt just like that. Another Saturday Night Live parody on a much bigger budget. This is a film we simply could’ve done without. It failed to make appreciate or applaud remakes, something which the film is very aware of. It also failed at making itself feel like an actual Christmas movie and getting me into the holiday spirit. If anything I walked away from my couch feeling like The Grinch.

If there is anything to applaud when it comes to this film is the very small connective thread to the first two “Home Alone” films. We get the return of Devin Ratray as Buzz McCallister who is now a police officer. We also see that the McCallisters are also in the home security business as well, which is a nice touch given how Kevin McCallister was able to protect his home but also an entire building in New York City. Plus the nod of Kevin always playing the “kid left at home” prank on his older brother every year because he was left behind for the holidays was probably the best piece of writing in the entirety of this film.

Overall, “Home Sweet Home Alone” has zero charm and in no way, shape or form feels like an actual “Home Alone” film (y’all better put some respect on “Home Alone 3” now). Pair that with an uninspired script that lacked any and all creativity coming from the writers of Saturday Night Live. You get a film that’s an absolute whammy with absolutely zero heart and even less of a Christmas spirit. Watch at your own risk.

“Home Sweet Home Alone” is streaming now on Disney Plus.