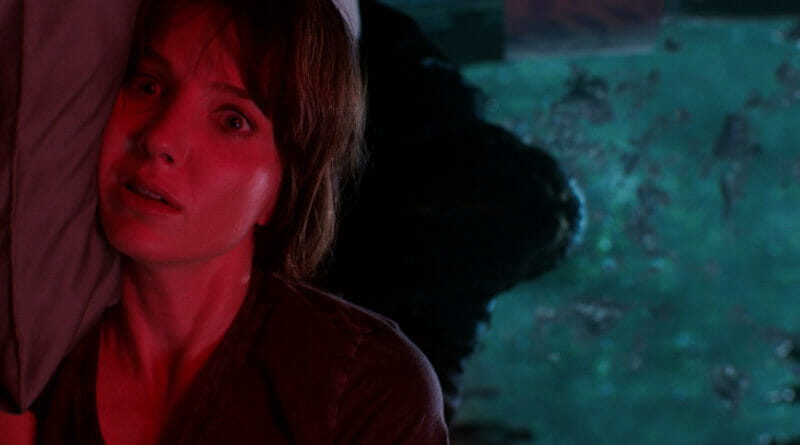 
“Malignant” has more thriller and slasher elements to offer and less to almost no horror at all.

After delivering a much-needed billion-dollar blockbuster with “Aquaman”, “Malignant” sees James Wan returns to the genre that he has mastered which has seen him deliver some of the best horror blockbusters like Saw and Insidious. Directed and produced by James Wan with the screenplay from Akela Cooper, based on a story from James Wan, Ingrid Bisu, and Akela Cooper. “Malignant” follows Madison (Annabelle Wallis) a woman who has suffered three miscarriages and is a constant subject to domestic abuse at the hands of her husband Derek (Jake Abel).

After the sudden and mysterious death of her husband, Madison starts experiencing visions of brutal killings in real life and approaches the police with the help of her sister Sydney (Maddie Hasson). How Madison ends up playing the crucial role in solving these murders with the help of her sister and detectives Kekoa Shaw (George Young) and his partner Regina (Michole Briana White) forms the crux and rest of the story.

“Malignant” is pretty basic and is much easier to dissect as it basically involves a scary hospital on the edge of a cliff, a haunted house, doctors with shady experiments, a troubled pregnant woman, an aspiring actress, who’s the sister of our main character, funny detectives and old-school jumpscares that are sprinkled throughout. Topped with effective and probably the best use of CGI in a horror film.

However, what saves this messy film, is a genius twist in the third act and the tonal shift and treatment of the proceedings that follow with it. What starts out as a tedious horror film sheds out all of its horrible writing and hits the pedal with full-blown, out for blood, thrilling slaughter-fest. James Wan’s directorial style and the fresh take save the entire film without sinking it completely. While the movie fails completely on the script and writing front, it outshines and over-delivers on the visual front, firing on all cylinders.

Malignant’s score is also not up to the mark, even though Joseph Bishara, Wan’s longtime collaborator has worked on it, the score often times keeps undercutting the little dramatic moments the movie has in store to offer. A gory final reveal that is set up after an exciting chase sequence and the aftermath of that reveal with James Wan’s trademark style and camera movements make up for the most of it. The tone of the story is off by a long mile, and it doesn’t offer much room for the characters to grow.

“Malignant” has a lot of gore to offer, but if you are looking out for a horror movie from James Wan, you will be disappointed, but “Malignant” with its silly writing and the solid entertainment factor, it would make for a perfect and fun watch on a Halloween weekend.

Malignant is playing in theatres and is available to stream on HBOMAX.