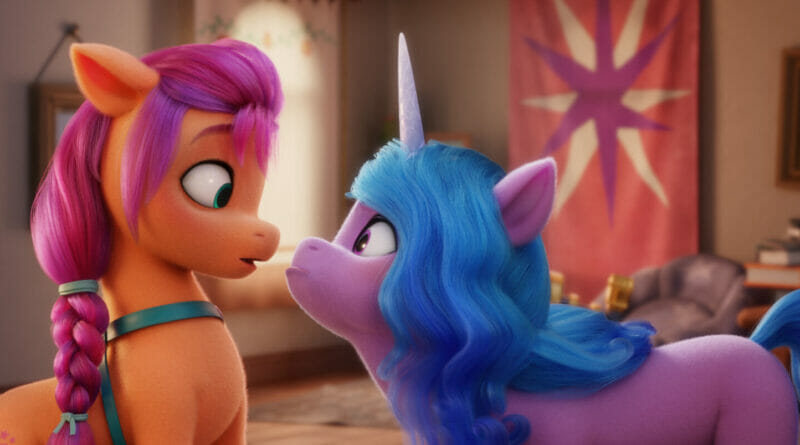 
Saddle up everypony because there’s a new face of friendship in Equestria. Unsurprisingly, I am a fan of the My Little Pony animated series and wholeheartedly love the characters, the friendship lessons, and even the music of the show. It broke down difficult dynamics to understand in the world of friends and how to be a good one, to be easily understood in the minds of children. I came to this movie excited to see a new group of ponies take on these tasks of teaching about friendship.

Let’s start with our new group. We are first introduced to Sunny, an Earth pony who was taught by her father Argyle that all ponies were meant to be friends and not meant to be afraid of the Pegasi and Unicorns like the rest of her hometown Maretime Bay. She is optimistic and open-minded to all. Super sweet and nearly the same personality as Twilight Sparkle (although a tad more friendly to new things).

Sunny has a childhood friend named Hitch, an Earth pony as well, who was her only friend in town and who also happens to be the Sheriff in town. It was actually nice to see a male pony in the main group of friends. We had a guy influence in the original show in the form of a dragon named Spike.

Then we meet the ever-cute, super buoyant, and sweet Izzy the Unicorn. Definitely the Pinkie Pie of the group with curls near to match. Traveling to the kingdom of Zephyr Heights, we meet the royal Pegasus siblings Zipp and Pipp. Zipp is more Tomboyish and daring and Pipp loves broadcasting on social media to her fans known as “Pipsqueaks” and also sings for her fans. I love the group and can’t wait to see the new personalities in the future if they are going to segway with a series from the movie.

Next, I have to touch on the music. The first song was cute, upbeat, and in sync with the original show. As the movie went on, the songs that were sung seemed almost forced and out of place. If they were going to put in a song I prefer if it wasn’t thrown in my face. At least in the original show, the songs came organically and only if the episode called for it. I can still recall “Winter Wrap-Up” from the series, sadly the first song was the only memorable one in the movie to me.

Furthermore, something that was missing from the movie which would be considered a crucial part of the original series: cutie marks. On the rumps of all ponies, are cutie marks that tell the bearer what is it in life that gives them a purpose or spark in their lives. It nearly was something that was based around any ponies’ personalities. I did not see any cutie marks on any of the ponies in the movie and it concerned me.

The plot to me was uncomplicated, it doesn’t take an outside force of magic or things of the sort to make friends with someone that’s different from you. We enter the modern new world of Equestria seeing a divide between the three breeds of ponies. Not trusting each other, and drinking the water from the poisoned well of wrong information about one another. But then it becomes obvious; something is definitely wrong and awry with this world. Unicorns can’t do magic, and Pegasi cannot fly, yet the Earth ponies believe otherwise and think they will use their abilities to harm the Earth ponies.

So our new Mane 6 try to find the source of what went wrong and are trying to restore it in their communities and lives. They learn about each other and themselves as they go through this quest and trust each other to get the job done. And as they believe they find the source of power to return magic, it fails and gives Sunny the epiphany that friendship doesn’t start with a magic source, but with everyone doing their part and moving forward from the mistrust and bad blood. Friendship starts with each and every one of us and could build toward something strong and beautiful.

It pulled at the heartstrings hearing that. The adult world can be so harsh sometimes and often tells each other that because of bad experiences with some bad people, we should not trust anyone or extend the hand of friendship. But movies meant for children often deliver a message more true than any philosophical debate. Sometimes we need to take a break from the adult world and open our eyes to see like that of a child, people are worth making friends with.

Overall “My Little Pony: A New Generation” was a cute fresh beginning from the original series, with new faces, personalities, and even paths for the ponies. I’m still wondering if cutie marks will at one point factor into the movie, and if the movie will convert into a series? And if it does will the animation be the same or go back to the original look? These are questions I will hold onto until Netflix answers them. I welcome this new movie with its own lovable characters with open arms ready to run with them and have fun.