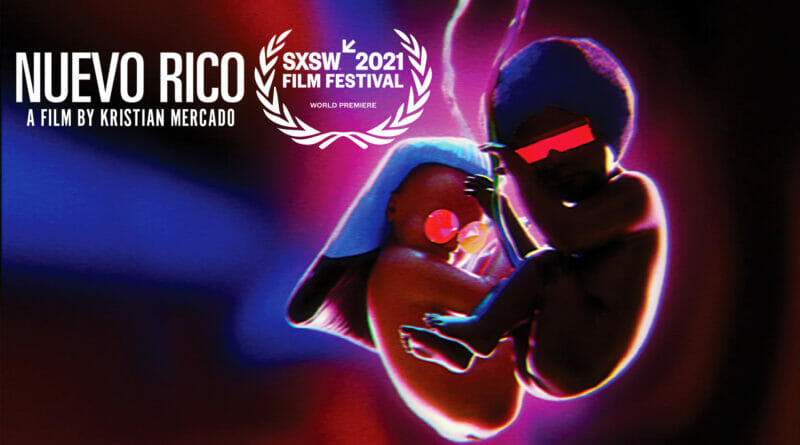 
SXSW 2021: Nuevo Rico Highlights Reggaeton, Taino Culture, and the good and the bad that comes with money and fame

SXSW 2021 brings forth Nuevo Rico, a short animated film scripted and directed by Puerto Rican filmmaker Kristian Mercado Figueroa. Nuevo Rico is a story that highlights the island of Puerto Rico, the reggaeton culture, and the impact it has on Puerto Ricans and Latinos across the world. While also highlighting the good and the bad that comes with money and fame and laying down more of the groundwork for Taino Culture to be represented in the entertainment medium.

Nuevo Rico tells the story of sibling reggaeton artists Barbie and Vico who are struggling to come up. While evading police, Barbie and Vico crash land in a jungle and are encountered by the call of the Gods or in this case the Zemis (Taino Gods). Answering the spiritual calls, the sibling duo meet the messenger of the Zemis (Gods) and are quality checked to see if they have what it takes to be the next big hit in reggaeton. Something the sibling duo have been struggling to accomplish.

Hungry for success, the sibling duo signs their contract with the Zemis and instantly becomes the reggaeton stars they’ve always wanted to be. But everything that shines isn’t gold and with all things good, there’s an equal amount of bad. Burning through money, sex, and drugs, the duo has amassed unimaginable success and the merit of their sibling relationship is tested when Barbie is asked to become a solo artist.

Things quickly go awry and blood is shed. It’s then when they realize that the cost of that success was much greater than they thought it would be. As the title entails, Nuevo Rico, or newly rich. As a youngin’ who amassess that much success, that much fame and money. You can easily be consumed by that and can quickly spiral and lose what means most to you.

And that’s something that Nuevo Rico does extremely well in its short runtime. As a Latino of Puerto Rican and Dominican descent, being raised by a Puerto Rican mother and having lived in Puerto Rico for nearly four years when I was a young kid. Nuevo Rico resonated with me on levels that I never imagined it would. It’s not often that stories based in reggaeton, Puerto Rican, and Taino culture are told today.

So seeing this film and seeing the massive push on social platforms like TikTok pushing the Puerto Rican and Taino culture to the forefront to educate the world about a culture that has been historically diminished and nearly erased from existence and the history books. Seeing the island of Puerto Rico and the genre of music that represents us the most in the center of all this touched me to my core.

It honestly even made me want to visit the island again. Breathe that fresh Caribbean air, the smell of the ocean, get sunkissed by that hot but loving Caribbean sun while I chill in the marquesina (car garage) at night listening to the sounds of the Coqui. Nuevo Rico just made me feel seen and made my personal journey of education in learning more about my Taino roots and how we as Puerto Ricans, Dominicans, Cubans, and Haitians, although now in a more modernized world, still practice some of those Taino practices and teachings that have been passed down through the generations.

One thing I do hope that Nuevo Rico instills in its viewers no matter what race or ethnicity they represent is to encourage them to learn about their history. Learn about your ancestors, the way they lived, and how their old traditions are still being used today. But also to encourage the viewers to learn more about outside cultures and ethnicities and their traditions and how their music, practices, and wardrobe represents them.

Make sure to check back for our interview with Nuevo Rico director Kristian Mercado Figueroa as we talk about Taino culture, reggaeton’s influence on Latino culture, and the inspiration behind Nuevo Rico.