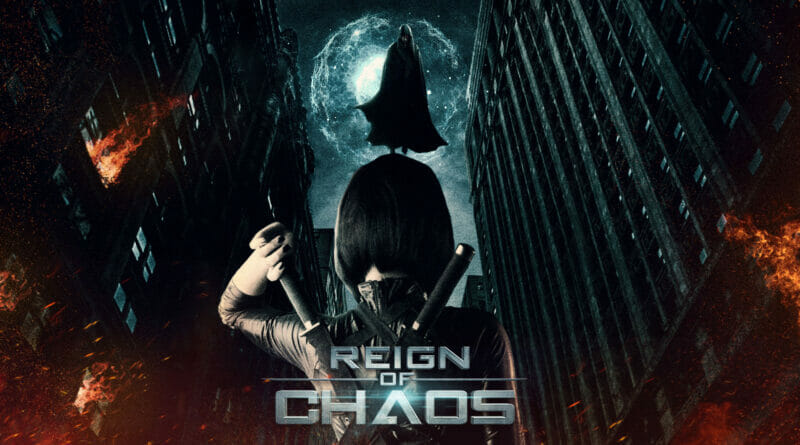 ‘Reign of Chaos’ Review: A Not So Apocalyptic Apocalypse

Left Films presents the latest film from director Rebecca Matthews, ‘Reign of Chaos’. The film is set in a post-apocalyptic landscape with the evil Lord Chaos turning most of humanity into zombie-like creatures. Three young sisters (Rebecca Finch, Georgia Wood, and Rita Di Tuccio), descendants of the Goddess Nike, have to unite in order to defeat Lord Chaos and preventing from world domination.

And technically the film delivers on this story, but what a weird and convoluted way to tell it. Reign of Chaos begins with an extensive narration explaining the machinations of the setting and backstory of the world-building it will focus on, but it’s so long, so convoluted that I got completely confused halfway through its overtly long explanation. The best I can summarize the basic lore it wishes to convey is that there are three ‘The Ones’ who have to fight an evil guy who turned people into not-so-quite-zombies zombies.

After that, the film starts tackling the backstory of Rebecca Finch’s character Nicole, and by extension, we start seeing the cracks of the movie very early on. I mean, the problems began in the prologue, but now it truly manifests themselves once the story actually starts. The apocalyptic setting is non-existent.

The houses seem fine, everyone wears relatively normal clothes, there’s actual electricity in all the houses and seemingly even gyms are open for training montages. The only apparent issue in this world is the fact that there’s not a lot of food, and there’s no one around (?). Apart from that, there’s one ‘zombie’ every once in a while with barely any make-up on running towards our heroines, but barely posing any legitimate threat.

Then enter Rhodri, played by Peter Cosgrove, doing his best Christopher Lambert Raiden impression from ‘Mortal Kombat’ (1995), recruiting our three descendants from the Goddess… let me check… Nike. The Goddess Nike. She is called… Nike. That’s great. Moving on…

Rhodri’s cowboy aesthetic feels so weird and misplaced since the aesthetics of the villains, generally, everywhere else in this movie look normal. I dig the weird cowboy aesthetic, too bad it’s wasted in the flick. Either way, he finally recruits all of them and the inevitable training montage begins. At a gym. I’m an indie filmmaker, I understand creating these narratives on a budget and having limitations based on potential locations and such, but I can’t believe they couldn’t find some abandoned building to do a training montage in or something that could allude to said post-apocalyptic landscape it kept referencing. At the very least I’d buy it more and it would have been more fitting than a gym.

Some ‘zombies’, which by the way are called ‘joiners’ in this world, decide to interrupt the montage and our female leads battle it out, with incoherent shot compositions and quick-fire edits. Nicole learns to embrace her inner power and throw ki-blasts thanks to Rhodri’s perseverance. And with that, our leads are ready for the final confrontation with Lord Chaos.

They suit up in black leather suits as if this was ‘The Matrix’ or ‘Charlie’s Angels’ and head out for the final confrontation. They all run around escaping…one random ‘joiner’ out on the street to conserve energy for the final battle… or maybe because they didn’t create any choreography for that fight sequence and decided to leave it all for the finale, who knows?

They all eventually encounter the two children of Lord Chaos and end up fighting Georgia Wood and Rita Di Tuccio’s characters so our main protagonist, Nicole, can confront and stop Lord Chaos. They fight, fight fight fight, and defeat our evildoers. Nothing really seems to change in the outside world, no blue beam in the sky dissipates, no dark cloud disappears to show brand new dawn, nothing, it just stays generally the same.

I’d wish that Reign of Chaos had committed to its premise, shown us that weird bonkers post-apocalyptic setting, and shown us how this world was affected by the machinations of this Lord Chaos. I would have at least commended it for its crazy attempt. The film plays it straight, for the most part, there are no B-movie elements to this, it decidedly commits to its premise and sticks to it, but as a result, there’s not much in the way of entertainment value since there’s no intriguing fight sequences, weird CGI or cool aesthetics to accompany this idea.

I like the film’s short run time (77 minutes), as a result, nothing is wasted plot-wise, and everything moves at a very steady pace. When it goes a little off the rails, it’s a tad enjoyable. The three female protagonists, Rebecca Finch, Georgia Wood, and Rita Di Tuccio, do a fine job given the characters they’re portraying and the story given to work with. I wish they’d do more action sequences, but I suppose it’s fine for what it was. Cowboy Raiden was also cool. But for everything else, Reign of Chaos misses the mark for me. Who knows, give it a shot, maybe it’ll be your cup of tea, but I wasn’t truly succumbed to chaos.

Reign of Chaos is now available on digital and VOD. 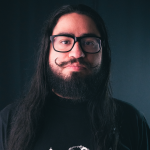