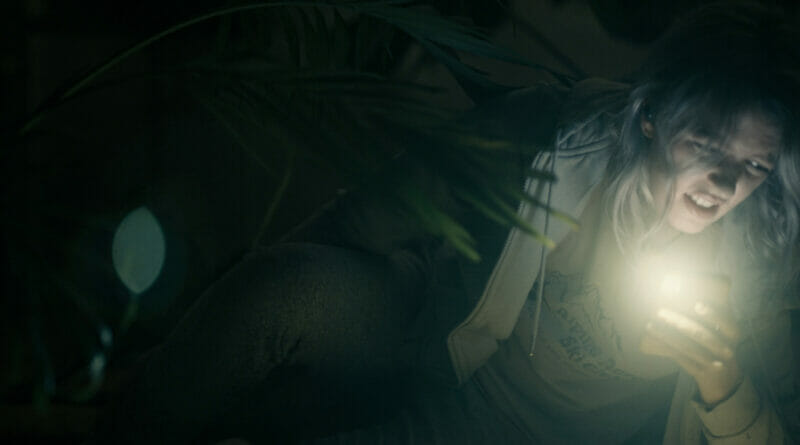 ‘See For Me’ Film Review


See for Me, IFC’s newest release, follows Sophie as she uses an assistive app to avoid a cat-and-mouse situation in a secluded mansion in upstate New York with robbers. Though the premise suggests an innovative update to the thriller storyline with a blind protagonist, the film falls short in execution.

The movie follows Sophie (played by legally blind actor Skyler Davenport), a former teen skiing wunderkind whose career came to a tragically quick end resulting from a seemingly fast onset case of Retinitis Pigmentosa, a genetic disease causing different types of blindness. Sophie, in a cloud of bitterness and anger, travels to cat-sit for Debra (Laura Vandervoort), a recent divorcee. The first third of the movie progresses relatively uneventfully, but it does introduce the audience to the titular “See for Me” app and volunteer operator, Kelly (Jessica Parker Kennedy) when Sophie is accidentally locked out of the house.

Awoken by unknown sounds, Sophie walks into the middle of a robbery, as the perpetrators attempt to break into a safe hidden behind a false wall. After placing a 911 call, Sophie contacts Kelly through the See for Me app for help navigating out of the situation. Panicked, Sophie inadvertently runs straight into one of the robbers, cutting off contact with Kelly. Sophie attempts to strike a bargain with the robbers, controlled by an unknown boss through the phone, in order to get a cut.

Sophie’s actions result in the death of another character but manage to reestablish contact with Kelly–until the predictable moment that the phone battery dies. See for Me ends in a predictable manner: Sophie comes out on top, with the would-be robbers all dead, a new friendship with Kelly, and the confidence to take up skiing again as a Paralympian. Much of the narrative is predictable. As has become a common occurrence with any use of technology in thrillers, the phone battery dies at a crucial point when Sophie must then finish off the chase solo. The robbery plotline, though likely meant to be surprising, also feels uninventive in regards to who is behind the score.

Some of the characterizations differ from the traditional thriller storyline. Sophie is not the innocent victim that might initially be assumed. Rather, moral ambiguity surrounds Sophie as the audience learns more about her motives for taking the house-sitting jobs. While much of the filmography is underwhelming, one scene stands out.

When the audience is first introduced to Kelly, she is playing a ‘Call of Duty’/shooter-style game. Mirroring this instance, once Sophie reconnects with Kelly through the app, Kelly’s view (and the audience) is of the gun Sophie holds as she fires at the robbers. In that instant, Kelly appears as a gamer and Sophie the avatar in a moment where game and reality collide. Beyond that scene, the movie remains similar to other thrillers. See for Me attempts to be a modern update to the cat-and-mouse thriller but unfortunately does not achieve this goal in an extraordinary manner.

“See For Me” is playing now in select theaters, Digital and Premium VOD.