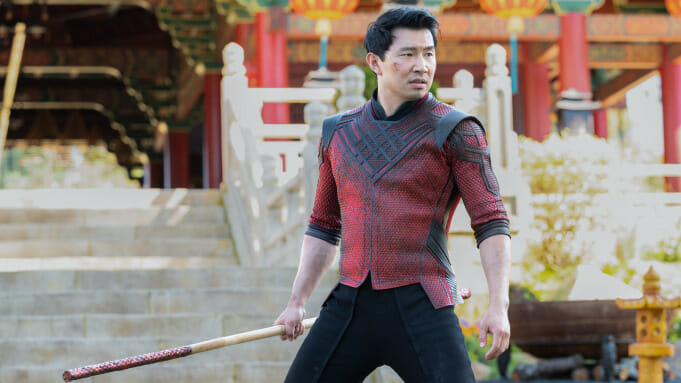 SHANG-CHI and THE LEGEND OF THE TEN RINGS REVIEW: Marvel’s New Hero Delivers a MASTERCLASS in ORIGIN STORYTELLING.


The origin tale of Marvel’s first Asian superhero, Shang-Chi succeeds in delivering the story of a dysfunctional family and how it leads to finding your own true self.

WARNING: THE FOLLOWING REVIEW CONTAINS MAJOR SPOILERS AND DESCRIBES MAJOR EVENTS THAT UNFOLD THROUGHOUT THE DURATION OF THE FILM. SPOILERS AHEAD!

Xu WenWu played by the legendary Tony Leung, whose heartfelt performance right from the opening moments of the film is the driving force behind this movie. Unlike our titular hero, Shang-Chi played by Simu Liu. WenWu’s intentions are absolutely clear from the get-go, the Ten Rings are his and he is completely hell-bent on making the best use of all the powers that are bestowed on him to the fullest. Like many other MCU villains, WenWu is unapologetically power hungry and wants to extend his power and domination in every single way possible and has succeeded in doing so, with his Ten Rings organization, which is spread throughout the world and has enough power to work even from the shadows and create terror.

WenWu is on a quest to find the hidden city Ta-Lo, and on his way he crosses paths with Jiang Li played by Fala Chan. Jiang Li is the protector of the hidden village. Their first interaction on the screen is portrayed in such a graceful, yet poetic way, unlike anything anybody could have expected. The fluid movements, the sheer details, and the delicacy with how effortlessly the scene progresses are an absolute treat to the eyes. Through a montage of shots, we get to see WenWu falling in love with Jiang Li, giving up the Ten Rings to live a normal life. We then meet baby Shang-Chi and his sister Xu Xialing before cutting to present-day MCU.

Shang-Chi is working as a valet parker with his best friend Katy played by Awkwafina, both of their characters are written in such a way that they instantly become relatable. Shang-Chi’s life of no stress and partying comes to a sudden halt as his past catches up to him and we are trusted into the world of Shang-Chi’s past and the world of the Ten Rings organization. One of the most interesting aspects of Awkwafina’s character, Katy, is the way in which she represents realistic portrayals of millennials of this generation, who although know about their heritage and their ethnic background, have a hard time speaking their native language.

Our introduction to Razor Fist in the film comes during the heavily marketed bus sequence which sees Shang-Chi fighting Razor Fist and his Ten Ring assassins, who are after Shang’s pendant which was gifted to him by his mother when he was a young child. The bus action sequence has to be one of the most engaging action sequences in the film, which brilliantly displays Simu Liu’s martial arts skills. After this battle, Katy questions Shang about his identity, which he has kept a secret for over 10 years.

This encounter with Razor Fist and the assassins of the Ten Rings makes Shang-Chi realize that his father is looking for him in order to bring him back home. Knowing that his sister Xu Xialing, Shang sets off to meet his sister and to warn her about their father coming back for them. Here we are introduced to Xu Xialing played by Meng’er Zhang. Xialing runs the underground fight club that is heavily featured in the film’s marketing and also features the new version of The Abomination in a friendly scuffle with Wong. Fun little fact, Tim Roth who played Abomination in The Incredible Hulk (2008), made his MCU return to voice Abomination in this film.

After Shang-Chi is forced to participate in the tournament, he fights a mysterious fighter who just so happens to be Xu Xiliang. Even though the fight between them is fairly short, we get to know the reason for their tension-filled relationship. However, their scuffle is interrupted by Death Dealer, Razor Fist, and Wen Wu which leads on to another action set piece that stands out technically on many terms. While Shang-Chi is trying to save Katy from the assassins, Death Dealer is on the hunt for Xu Xialing’s pendant.

The entire action sequence stands out from the one that we experienced prior, as this involves a lot of well-choreographed, Jackie Chan-inspired fights choreography, with very few jump cuts and shaky cam which is something that dilutes a lot of the action sequences seen in the MCU. Especially with the Wushu-style of martial arts on full display. Wen Wu finally makes an appearance and forces Shang-Chi and Xu Xialing back to their home.

WenWu tries to convince his children that their mother is calling out to him as she is trapped behind a mystical gate in Ta-Lo. WenWu reveals his plan to save his wife and promises to destroy everyone and everything that comes in between his mission to free the love of his life. Trevor Slattery played by Sir Ben Kingsley is found jailed by WenWu’s men and we are introduced to the first mystical creature a faceless furball Morris. Trevor Slattery provides the film’s comedic relief and is the bridge between Morris and Shang-Chi in their quest in getting to Ta-Lo first before his father does.

Shang-Chi, Xu Xialing, and the rest of the team embark on their journey to Ta-Lo with Morris who knows how to guide them there. In Ta-Lo we are introduced to Ying Nan, Shang-Chi’s aunt, played by Michelle Yeoh. Ying Nan provides all of the exposition needed to learn more about Ta-Lo, the reasoning for their hiding, the legend of the Ten Rings, the Great Protector, and the Dweller in Darkness. The Dweller in the Darkness has been sealed behind the dark gate and is the one responsible for WenWu’s burning desire to save his wife. Setting the stage for one of the best third acts the MCU has seen since films like Avengers: Infinity War and Avengers: Endgame.

Shang-Chi confronts his father with the same rage that his father installed and wanted to see in him. But Shang is quickly overpowered by WenWu and his Ten Rings again. An epic battle ensues, WenWu breaks the gate, the Soul-Eaters emerge to deliver souls to the Dweller in Darkness. Just as WenWu starts to realize his mistake, the Dweller in Darkness breaks out and snatches WenWu’s soul. Here we get one of the most tragic deaths of any villain in the MCU.

Which showcases the relationship between father and son. An acceptance of fate and in a moment of proudness, we see WenWu ultimately pass down the Ten Rings to his son, Shang-chi who can only watch as his father is killed. All seems lost and then the Great Protector emerges from the water to aid in the fight. The combined forces of Ten Rings and Ta-Lo save the village and save the world.

The writing of Dave Callaham and the screenplay of Andrew Lanham and the direction of Destin Daniel Cretton work in delivering this wonderful epic with Bill Pope’s alluring cinematography perfectly laces up and ties everything together perfectly. Destin Daniel Cretton is well known for his intimate human dramas like “Short Term 12” and “Just Mercy” and he brings that power of strong human emotions to the superhero genre and the end result is way better than anyone could have imagined.

Shang-Chi has a large tape of influences that represent the decades of Asian imagination and culture which has been imported to the West. Referencing these things alone won’t work nor would it make a movie special, as it ultimately boils down to the execution of that representation and Shang-Chi delivers on all notes. Shang-Chi celebrates Wushu martial arts in its stunt work to its full glory.

As mentioned above, there is no shaky cam or any jump cuts, instead, we get prolonged takes that beautifully capture the grace and beauty of this style of martial arts in a way that Hollywood hasn’t seen or done before. As we referenced above again, much of the legendary Jackie Chan stunt team were heavily involved in this project, namely Fight co-ordinator Andy Cheng and the late Brad Allen, who has collaborated with Jackie Chan on many prestigious films. And those influences are seen and are fully on display.

There are many references to Asian culture and Chinese history, the creature design is a testament to that. Morris, The Guarding Lions, Nine-Tailed Fox, The Great Protector Dragon are all the animals that are present prominently in ancient culture and heritage. What makes the story of Shang-Chi work even more strongly is the underlying theme of grief and the ways of coping with it (a theme prevalent in the ongoing MCU PHASE 4) a Father and Son, a Brother and Sister, and a mother who still guides and lives in the hearts of her children, and a husband who is deeply in love with his departed wife and believes she will return.

Tony Leung’s portrayal of WenWu’s conflicted character who has all the power in the world but has lost the only thing that his heart desires makes him the most empathetic villain in the MCU. The story of Shang-Chi works even without the gloss of being in the superhero genre and the CGI mayhem that engulfs the entirety of the third act. Although we must say, if anyone in Hollywood can make a live-action anime film, Marvel Studios just proved unintentionally that it has what it takes to make it happen.

Everything in Shang-Chi and The Legend of the Ten Rings is very well balanced, the humor, the social commentary, and the connections to the larger MCU, both the men and women are equally stronger and powerful, and the story doesn’t make one look bad, so the other looks good and is serving rightfully.

As extra points: Shang-Chi doesn’t shy away from putting the focus on how poorly women are treated in parts of Asian culture still to this very day. They are shied away and are always kept in dark by the family members, prominently by their father figures, WenWu’s treatment towards Xu Xialing is a testament for that and there is a little reference to a tradition of how Asians remove their footwear while heading inside their home, this can be seen in the earlier sections of the movie, before the bus action sequence. It’s all there and for that reason alone, outside of the flashy stuff, really makes this film so great.

Shang-Chi and The Legend of the Ten Rings is now playing in theaters!