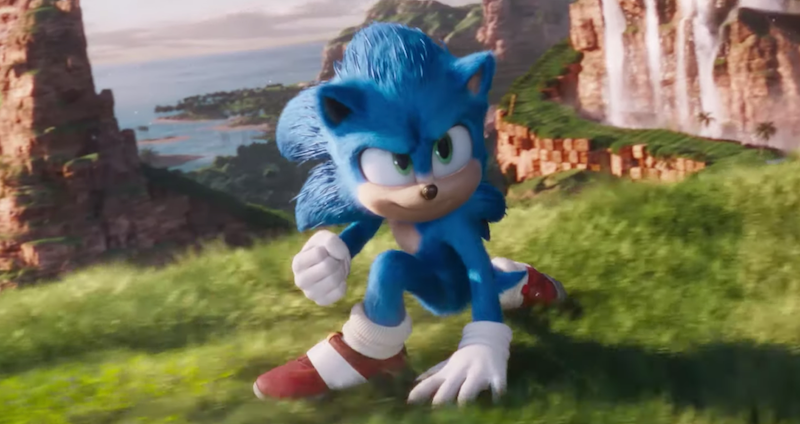 
Sonic the Hedgehog: Fast fun for the whole family!

The year is 2020 and we’ve just witnessed the end of the golden age of superhero movies. We’ve seen Avengers come and go, an absolutely fascinating butchering of the two most iconic heroes ever in cinema (BVS) and we actually finally got a good(?) video game movie in that of Detective Pikachu. As Hollywood looks towards what 80’s franchise they can now leverage to meet their bottom line(s) Sonic the Hedgehog is finally released in theaters.

It’s no secret that Sonic had a lot going against it, from its weird leg muscled teaser poster, to a trailer so hated that the producers decided to push the release 6 months and have the VFX department fully redesign the blue blur. With Sonic also never quite sticking the landing game-wise since Sonic Adventure 2 and that foul stench that seems to follow every video game movie around. It’s safe to say that Sonic The Hedgehog had an uphill battle going into this weekend’s release. Well, I’m happy to report that Sonic the Hedgehog is not awful, it’s actually a lot of fun.

Let’s focus on that word – ‘fun’. Sonic is by no means a great movie, and by some standards, I wouldn’t even call it a ‘good’ movie, but quite honestly it has a lot of heart. There are logical fallacies all over the place, plot holes galore and most notably a nation-wide manhunt that never appears to be any more than a really really boring game of cat and mouse. However, the film remembers to keep a smile on your face the entire time, and that’s what I think is Sonic the Hedgehog’s true strength.

Make no mistake about it, Sonic the Hedgehog is a kids film in the same vein as Detective Pikachu. There’s some jokes for adults, but ultimately it’s a film written, shot and marketed to children. The jokes that are here for grown-ups will go right over little one’s heads and the more childish comedy never sinks too far for adults to wince or roll their eyes at. The comedy is spot on and 80% of the time, the jokes land quite consistently. Some highlights include a dance scene with Dr. Robotnik (who we’ll talk a little more about later), and a great hotel room gag that only lasts mere seconds, but does a lot to make you laugh and develop more character for Sonic. Which is another one of the film’s strengths: the characters.

In short, the standouts here are Ben Schwartz’s Sonic and Jim Carry’s amazingly over the top Dr. Robotnik. This feels like a role and a performance that is straight out of Carry’s heyday. He’s over the top yet very determined and grounded in his goals. But he has this sinister ora around him while being very silly and whimsical in most scenes. It’s really a delicate balance and he strikes in flawlessly, I wouldn’t be surprised if we get A LOT more Eggman in the potential sequels. Going back to Sonic, Schwartz clearly did his research, his delivery, his pitch, and his overall vibe as Sonic is as if they just plucked him right out of past 3D adventures.

My one gripe with Sonic is that he’s too stupid sometimes. I get that he’s not from this world and he lives in the woods: but there’s a montage of Sonic stalking his soon-to-be friend Tom at the beginning of the movie and it indicates this behavior has been going on for quite some time. Wouldn’t Sonic have picked up a few things by then? Either way, I think overall this is still a solid representation of Sonic as a character. The other characters are serviceable along with their performances, but ultimately anything that was going on that didn’t directly use Sonic or Robotnik had me bored and waiting for either of them to come back on screen. Although, I think that has more to do with the movie’s story than anything else.

Honestly, I’m not shocked at the fact that a movie about a lighting fast blue hedgehog has a terrible story. Although it’s very peculiar in that it could only exist within a movie like Sonic the Hedgehog, that doesn’t make it very good. In short, our hero Sonic is being hunted by an agent for the United States government named Dr. Robonik for causing a power outage (Yup, that’s really what happens, you can see it in the trailer). With the help of his friend Tom, the two must make a big adventure across the US from Montana to San Francisco for a big showdown with Eggman and to collect his magic rings. It’s not a very engaging plot, but it’s the fun that’s made along the way which makes the adventure worthwhile.

Alright before I wrap this up, I really have 2 more things of note to mention then you can get on with the rest of your day. First, the action is nothing we haven’t seen before in movies like Age of Ultron or Days of Future Past. Everyone else around the fastest character just seems to stop in place for several minutes while the fastest character changes the directions of bullets and missiles to save his friends and have the enemy ultimately undo themselves. I will say that they do get creative giving Eggman the power to match Sonic’s speed through one sequence which has them hopping the globe, other than that it’s pretty standard stuff. The last thing I want to mention is the wonderful use of the game’s mechanics brought over to the film.

In some scenes, Sonic takes a hit and loses all the rings in his pouch, after immediately getting up he picks them all back up and zooms away: JUST LIKE THE GAMES. Another example would be during a certain battle Sonic uses his homing attack to gain the advantage in air and take down his enemies: JUST LIKE THE GAMES. The final example would be when Sonic used his spin-dash move (seen in the trailer) to take down a pursuing Robotnik drone; can you guess what I’m gonna say? JUST. LIKE. THE. GAMES. Although in other films NOT associated with video games, subtle things like this wouldn’t matter, we may question why small things like this are significant, but in a film like this, it’s so obvious. These methods are used to convey that the filmmakers are familiar with the source material and are trying their best to emulate the game while also keeping a consistent tone and style to their film without straying too far into the” WTF zone”.

Overall, I could sit here and nitpick this film to death. Like I previously stated there are a lot of plot holes, logical fallacies and some pretty boring moments when Sonic or Robotnik isn’t on screen. But, I don’t think that would be doing this film justice due to the amount of heart and dedication that went into it. I think Sonic the Hedgehog is the best type of Sonic we could ask for. With memorable performances, laugh out loud comedy and a really really endearing protagonist in Sonic, I can’t wait to see what they do with the blue hedgehog next. Side note: stick around after the credits cause everyone is STILL trying to be Marvel.