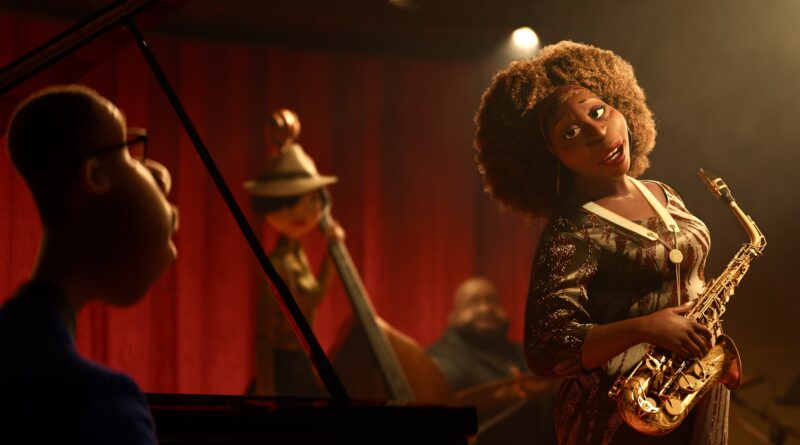 
Disney/Pixar Have Done It Again! Soul Delivers Not Only A Beautifully Animated Film, But A Story About Life and Death and The Impact We Leave Behind. This Is A Film Not Meant For Kids, But For Us Adults Who Hold Onto Our Inner Child.

When thinking about any Pixar film in retrospect, they all have a deep meaning about life, friendships, love, caring for thy neighbor just to name a few. When it comes to Soul a film written by Pete Docter, Mike Jones, and Kemp Powers and directed by Pete Docter. The film focuses on the life, death, and legacy of Joe Gardner (Jaime Foxx) a middle school band teacher who moments after landing the Jazz gig of his life takes a life costing misstep that leads him to life beyond the physical world.

Realizing that he has now passed on, Joe is not too accepting of his death and is dead set on finding a way back to the physical world, back to his body in order to play his new gig alongside Jazz icon Dorthea Williams (Angela Bassett). After a few failed attempts, Joe meets Soul 22 and a group of Counselors who assign Soul Mentors to new souls in order to guide them and help them find their spark or lack of a better word “purpose” for living prior to being sent off to the physical world.

After meeting Soul 22 (Tina Fey), 22 and Joe embark on a journey to get Joe back to his body on Earth. In the process 22 reveals how she’s let all of her mentors down in the past and has essentially given up on wanting a new life. The film does a great job of balancing the two perspectives of Joe and 22. Joe is deadset on just returning back to life in order to play his gig as he sees that monumental moment as being the only highlight in his life, while 22 as I mentioned before just doesn’t find life that interesting anymore and would rather remain a soul for the rest of spiritual existence.

In hindsight, both Joe and 22 struggled to find beauty in life and what really gives life its meaning. When Joe and 22 make it down to the physical world they, unfortunately, end up in separate bodies. Joe ends up in the body of a cat and 22 ends up in Joe’s body. Thus begins a new journey of rediscovery, truly learning, and finally seeing what’s the meaning of life and what makes life so precious, beautiful, and valuable.

They say you have to walk a mile in someone else’s shoes in order to understand what they deal with and what they are personally going through and this saying couldn’t have been any more true in this film as 22 starts experiencing life through Joe’s body. Through this experience, she truly sees and understands how the little things we experience in life are what make life truly beautiful and overall memorable.

While Joe is on the outside looking in, he also realizes how much of life he’s truly been missing out on and how he in a way has also held himself back from truly living. Yes, he was alive, but he wasn’t living, he wasn’t enjoying life. It’s one of the many lessons that are taught throughout this film and it a lesson of great importance and a true eye-opener for the adult viewing audience. While this is a kid’s film due mostly to it being animated and being made by Pixar, the film at its core is geared more towards the adult audience.

I don’t truly know if that was intentional or not but given today’s climate, whether you agree or not. A lot of us adults could’ve used this message to give us that little push to truly live life to its fullest. But most importantly that we need to live and not just exist. So at its core, despite being a kids film, this film is not entirely geared towards children and that’s not always a bad thing.

After an eye-opening experience and pleasant time on Earth, Terry finally gets his hands on 22 and Joe and brings them back to The Great Beyond. Learning of their “treason” the Counselors find a way to get Terry out of their hairs and get 22 ready to head down to Earth as she has now earned her spark. Joe, unfortunately, cannot return to his body and though unaccepting at first, he finds the will to send 22 off in a gracious way. It was a truly heartwarming moment as they have spent this entire film learning from each other and building this connection that’s made them really close.

As Joe gets ready to head to The Great Beyond, he is approached by one of the Counselors who reveals to him that he has earned a second chance at living. Something that I’m sure many many people would want in this world, a second chance at living. A second chance to do it all again but this time do it right. Joe gets this chance and he makes it a point that he will now LIVE every second of his new life. A huge recurring theme in this film as I mentioned above is that we for the most part just simply exist instead of actually living.

As much as Soul is being marketed as a kid’s film, I emphasize that it is not. It is a film that is very much for adults and it’s a film that I recommend for everyone. And one of the most beautiful things about this film which I have barely mentioned in this review is the fact that we have a film centered around Black characters that are voiced by Black actors and the diversity is something that’s needed and something we should start seeing more of in the future of Hollywood.