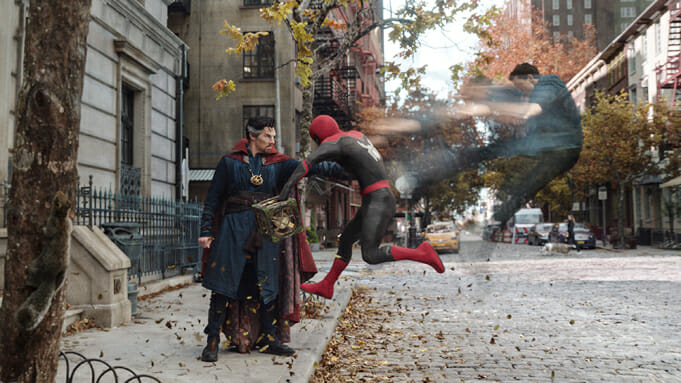 
The official teaser trailer for Spider-Man: No Way Home has officially arrived after being leaked. Despite Sony Pitcures’ best efforts to take down any traces of the leaked version of the trailer, it was truly a wack-a-mole situation in which Sony Pictures took down the trailer one place and it would pop up again in another. The trailer finally confirms many of the theories, speculations, rumors, and leaks that made their way online as fans foamed at the mouth demanding the release of the trailer.

Spider-Man: No Way Home will pick up months after the events of Spider-Man: Far From Home and will see Peter Parker deal with the ramifications of Mysterio revealing to the world his secret identity. The trailer kicks off with Peter Park and MJ spending some together on the roof of a building in which she reads some information on how Peter’s spider-powers include hypnotizing females.

Peter suggests staying on the roof as life in New York has gotten crazy for him. We then cut to Spider-Man swinging around the city with MJ as J. Jonah Jameson reports on Spider-Man being Peter Park and also dubbing him “Public Enemy #1”. We then see Peter Parker at the police station under arrest and being interrogated about killing Mysterio in which he pleads that it was not him, that it was the drones Mysterio was using.

Peter and MJ talk on the phone about how Peter feels relieved about not having to lie to anyone about not being Spider-Man and constantly disappearing. However, Peter tells MJ that he didn’t intentionally lie to her about being Spider-Man. Not only do we see how the world now views Peter Parker but we also see the unwanted attention Peter has now garnered at school. Not only is this revelation affecting Peter Parker, but it is now affecting everyone around him, including MJ, Ned, and Aunt May.

Just as the leaks previously mentioned, Peter Parker goes to visit Doctor Strange and asks him to conjure up a way to make people forget that he is Spider-Man. We get quick cuts of Spider-Man being surrounded by people and we see him running around unmasked in the newly revealed magic-imbued black and gold suit. Wong warns Doctor Strange not to conjure up that spell since it is dangerous. Strange doesn’t heed Wong’s warning and casts the spell anyways but also reveals to Peter that the entire world will forget that he is Spider-Man.

Peter is not too keen about the entirety of the world forgetting that he is Spider-Man because that will also cause MJ and Ned to also forget that he is Spider-Man. Strange tells Peter not to interrupt him while casting the spell but Peter doesn’t listen and they both inadvertently break open the multiverse as the breaking of the spell unstabilizes space and time. We see Spider-Man jumping around the now trippy version of New York and get a quick glimpse of what seems like a battle between him and Doctor Strange.

Doctor Strange tells Peter Parker that his main problem is that he is trying to live two different lives and that the longer he does that the more dangerous it will get. This is a recurring theme within the Spider-Man mythos and it’s great that we will now see that unfold on the big screen which surely implies that Tom Holland will be sticking around as Peter Parker/Spider-Man.

We get some quick action sequences as we see Happy Hogan being surrounded by some soldiers, Spider-Man in his black and gold suit fighting Electro whose off-screen but the yellow lighting we see attacking Peter Parker surely confirms that’s who he is facing in this specific scene. We get Willem Dafoe’s iconic Green Goblin laugh and his pumpkin bomb rolling across the screen and what sounds like Harry Osborne saying “be careful what you wish for Parker”; with the icing on the cake being the full reveal of Alfred Molina’s Doctor Octopus as Peter suits up and gets ready for a potential battle.

What Does the Spider-Man: No Way Home Trailer Actually Confirm?

Most importantly it confirms that the film will be a multiversal film, while it might not be a full-on Into the Spider-Verse live-action film, it will indeed have those multiversal aspects which will tie it directly into Doctor Strange in the Multiverse of Madness. We also get confirmation of Jamie Foxx’s return as Electro but not as the Electro from Andrew Garfield’s The Amazing Spider-Man 2. Something Jamie Foxx announced and confirmed in a now, long-deleted Instagram post. That post also teased the inclusion of Andrew Garfield’s Peter Parker, as well as Toby Maguire’s Peter Parker.

Despite not being seen on screen, just like Jamie Foxx’s Electro, Willem Dafoe’s Norman Osborn/Green Goblin has also been confirmed and this trailer gives you all that you need to really confirm that news. Even though Willem Dafoe recently denied any involvement in this film. We also get the confirmation of Alfred Molina as Doctor Otto Octavius/Doctor Octopus, as seen in the closing moments of the trailer. Alfred Molina confirmed earlier this year that he was part of the film and also confirmed that he would be de-aged via VFX which the trailer has also confirmed.

However, despite these confirmations, we have yet to get any visual confirmation on whether or not Toby Maguire and Andrew Garfield will also be in the film. But the inclusion of their respective villains from their respective films is now confirmed, fully confirming that they will be involved to some degree. Keeping that revelation, at least, visually, hidden as much as possible is the best route to go even if people know that they will be in the film through the long list of leaks that have appeared over the course of the past year.

Will We Get The Sinister Six and a Connection To Morbius?

The film also confirms that we will get the Sinister Six to some degree as well, or even the first attempt at forming the villainous team. And while it hasn’t been fully confirmed we can take the official Morbius trailer, the appearance of Michael Keaton’s Vulture in that very same trailer, as a film that will tie into Spider-Man: No Way Home as well. After all, the multiverse has now been burst wide open and the appearance of new and old villains altogether make anything possible at this point.

If I wanted to stretch this even further, we have a portion of the trailer showing some Halloween decorations which feature a vampire or Dracula to be more specific. Seeing how Morbius is known as the Living Vampire in the Marvel Comics Universe, that could be taken as a nod to the Morbius solo film, thus bringing it all full circle and connecting Morbius to Spider-Man: No Way Home.