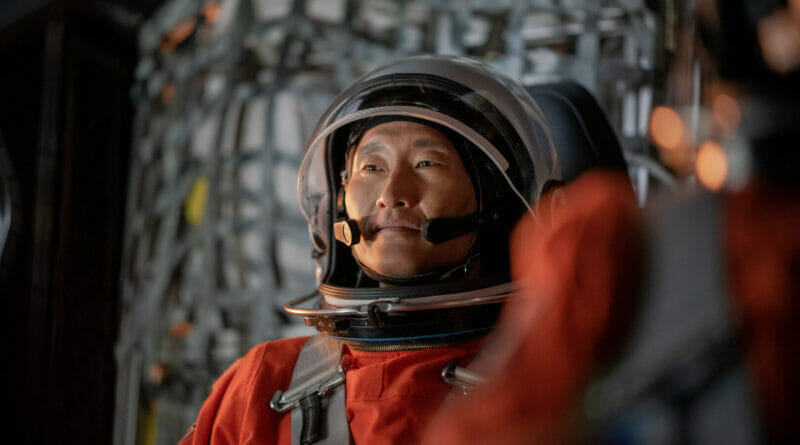 Stowaway Review: Shines With Terrific Performances From Its Cast But Ultimately Fails To Deliver Anything Special


Stowaway is a thoughtful thriller that fails to deliver on its major goal but succeeds in gaining the best performances from its major cast.

Taking the imagination and all the wonders of space and putting it into a story centered around 4 engineers is a bold move for any director, and to move forward in that line is very intimidating, to say the least, and that’s exactly what director Joe Penna tries to deliver with “Stowaway” the latest film offering from Netflix. The initial setting for the story is rock solid, as the director wastes no time and we are introduced to three engineers who are launched into space on a 2-year mission to Mars to start a colony that can be later developed to use for mankind.

We are introduced to Veteran Team Commander Marina (Toni Collette) and medical professional Zoe (Anna Kendrick) and botanist David (Daniel Dae Kim) who are all experiencing the pressure of the mission at hand for them and are equally excited about the great leap it would be for mankind.

Tim Collette plays the crew leader and she serves another strong performance that continues to showcase her amazing chops and an ever-impressive emotional range. All the dilemmas faced during the voyage and the moral implications it has on the team, the character comes across as stoic and heroic and is not overdone at all. Daniel Dae Kim is the mission’s botanist whose research is very valuable and their entire mission relies on his character’s personality and Daniel Dae Kim’s performance becomes the perfect fit for the environment the team is in.

Shamir Anderson plays the titular character and delivers a sympathetic performance as a man who finds himself in deep-space without any training to undertake any tasks that are before him and Shamir Anderson delivers his work perfectly. It is Anna Kendrick who gets to shine more and is really commanding the entire runtime allotted for the story. She plays the selfless medical officer, whose morality amidst adversity is unwavering and unflinching. Anna Kendrick delivers a terrific performance, that leads into the penultimate third act that doesn’t pay off in ways we would have expected and the film ends on a slightly unfinished note.

As the main conflict of the movie drops in, Michael (Shamier Anderson) an engineer working on the space station, suffers an injury and passes out on board. Michael is desperate about getting back to earth, while the three-person team is shocked about having an unexpected fourth member. Unfortunately, the space station doesn’t have enough amount of oxygen for a fourth person. It becomes pretty evident that drastic measures and sacrifices are inevitable, as the story progresses, to reveal any more of the film moments would be huge SPOILERS to the entirety of the movie.

Stowaway is a thought-provoking take that wouldn’t be able to hit the right notes on all for all audiences and will surely have a divisive response among its viewers. The movie has some unbelievably major calmness in its entirety of runtime; the reason being is that the film lends itself to stand out from many sci-fi-themed films and their respective tropes.

The use of science is more simplified, with that we as an audience can expect more depth and tension to be built on. And this is where the film falls flat. As situations arise and discussions are happening, the film doesn’t build up any tension up until the third act, with the climax of the film also feeling very abrupt.

The performances from the cast make the film stand out a little from all the cliched Hollywood’s take on space exploration. The movie isn’t perfect by any measure and several questions can be raised about the living conditions in spacecraft, the film is set in a non-specific time in the future and some logic in the film can be nitpicked and torn part, but it shouldn’t be the case. Stowaway is a thoughtful thriller that fails to deliver on its major goal but succeeds in gaining the best performances from its major cast.