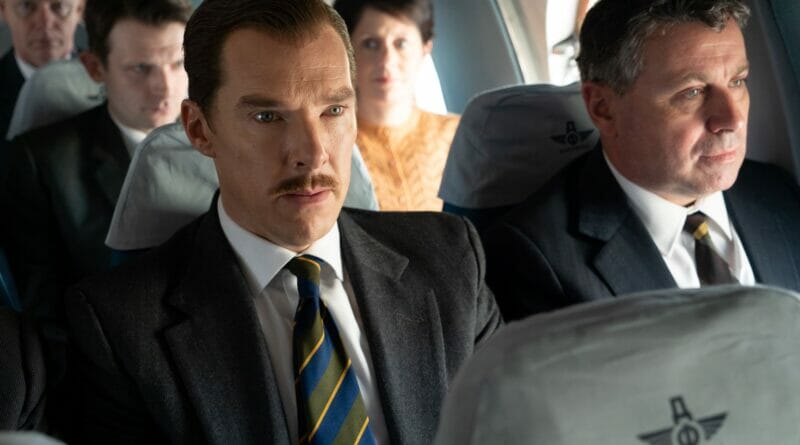 The Courier stars Benedict Cumberbatch (Marvel’s Doctor Strange, Sherlock Holmes), Merab Ninidze, Rachel Brosnahan, Jessie Buckley, Angus Wright, and Kirill Pirogov and is written by Tom O’Connor and directed by Dominic Cooke. Set in the Cold War era of London, based on the real-world life of Greville Wynne played by Benedict Cumberbatch, sees Greville Wynne an average salesman turned spy/informant for the CIA in an attempt to prevent a Nuclear War between the United States and Russia.

To say that this film is nothing short of thrilling would be underselling the film entirely. Just think of the notion of an average Joe suddenly risking not only his own life but the life of his immediate family in order to prevent war and potentially save the world. Things get intense!

The film’s slow and steady pace at first seems like a drag but that mostly due to laying down the foundation of the story and the thrill behind it. Using the secrecy of being a spy and remaining undercover at all times to its advantage in order to elevate the task at hand. As the story progresses and things start to unravel, every second from that moment forward is crucial and you feel that as a viewer.

At first, I wasn’t too sold on the film. By the time we hit the end of the second act and head into the third, I become fully invested in the story and the repercussions each misstep from our leading spies can potentially lead to, which is Nuclear War. While things are intense and keep you on edge, it is Oleg Penkovsky’s (Merab Ninidze) performance and his character’s dealings as a Russian spy who betrays his country in order to save the world that also elevates this story to its peak.

Ninidze and Cumberbatch shared an incredible sense of chemistry whenever they shared scenes together. Developing a deep connection and ultimately a close-knit friendship and fondness of each other, you care more and more for these individuals as the story progresses. The tasks they have been tasked with is just that much more impactful than it initially was. This film showcases how much “men of peace” truly create “engines of war”.

This is a story of war, peace, sacrifice, betrayal, and ultimately love and friendship. How far is one willing to go to prevent the world from being destroyed? How much is someone willing to sacrifice to protect their beloved and their friend?

The entire third act which spans out over the course of two years, from the moment Oleg and Greville are captured by the Russians, battered and abused up to the moment that Greville reveals to Oleg that the mission was indeed completed despite being captured and tortured as if the mission was a complete failure was for me, the most engaging, but also the most intense moments of the film as a whole.

Greville has to deal with torture, starvation, not seeing his wife and son for two years, all while not being able to be rescued by the United States. It truly put a strain on him physically, mentally, and emotionally. Seeing Benedict Cumberbatch’s performance throughout this entire act, all the way to him having to shave his head and lose all that weight to fully sell the role is more than deserving of some sort of award in a leading role. It’s truly just a testament to Cumberbatch’s talent as an actor.

The supporting cast of The Courier was astounding as well. Greville’s wife especially. Overall, The Courier is a must-watch in my opinion, especially if you like political thrillers based on true events. The stakes are high. While the cost of Nuclear War is also high, the cost of world peace is just that much higher and no one amount of money in the world can pay for it.