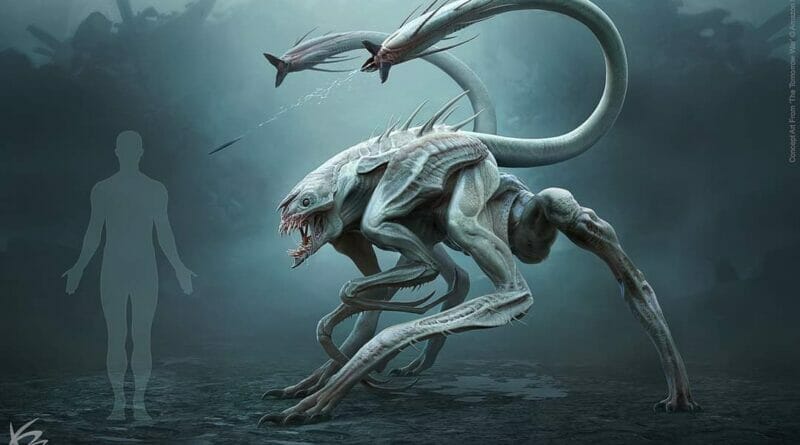 The Tomorrow War: Director Chris McKay Talks The Inspiration Behind The Design of The White Spikes


The Tomorrow War premiered this Fourth of July weekend on Amazon Prime Video. The film, which stars Chris Pratt, J.K. Simmons, Jasmine, Jasmine Matthews, Edwin Hodge, and a list of other Hollywood stars is directed by Chris McKay. A sci-fi action film that delivers one of the most horrifying alien designs in quite some time, known as The White Spikes. Throughout the film, we see the ferocity of The White Spikes as they hunt down the film’s protagonists in adrenaline-pumping scenes.

We had the gracious opportunity to talk to the cast and director Chris McKay during a press conference for The Tomorrow War in which Chris McKay was asked about the design behind The White Spikes and how he and the creative team who worked on the film tried their best to make their alien creature original and also horrifying.

There’s a couple of key points in the script, there’s the claws and the fact that they were white and had spikes on them and things like that. That’s a lot of room to interpret, and a lot of room to kind of play. Obviously, there’s a couple of high watermarks as far as alien designs, it’s whether it’s the Xenomorphian alien, or whether it’s the Predator, but then there’s everything else. It’s trying not to get close to that, but also trying to find something that serves the purpose of the film and was memorable and on its face horrifying.

I wanted something that felt ancient. I wanted something that felt like it was hungry. Those are the words that we used when we first started talking about it, that it needed to feel like it had just an insatiable hunger. I wanted the texture to really come through so that you would feel that that surface texture was really hard, that it had lots of chips and chunks and nicks and cuts, things like that because it had been around forever.

I wanted you to feel the flakiness, I wanted the skin to feel like it would flake off, and that there were shoulders that almost felt like armor, so it could repel attacks and that sort of thing. Also having some kind of offensive weapons. We came up with the tentacle and the spike and that kind of thing. I’m also a big H. P. Lovecraft fan, sort of like that cosmic technical horror stuff was something that was on my mind at the time.

Those are the notes that we talked about with them. We had a bunch of great design teams working on stuff. They came up with some really wonderful, interesting stuff that I hope if we get a chance to do another The Tomorrow War movie that we would use some of these other designs, we can fill out the other worlds and things like that. Ken went off and built something really great.

It looked like it had a hunger, it looked evil. Then we based the female off that. That became the male and we based the female version off of that. Yes, it was really a lot of fun working with the team and we came up with something that I hope is scary, I hope it works.

It goes without saying that The Tomorrow War really delivered on their intended ideas behind The White Spikes. No matter when or where you saw them you really felt their presence and their sense of hunger and horror; especially the female white spike who is essentially the leader of all The White Spikes.

The Tomorrow War is streaming now on Amazon Prime Video.