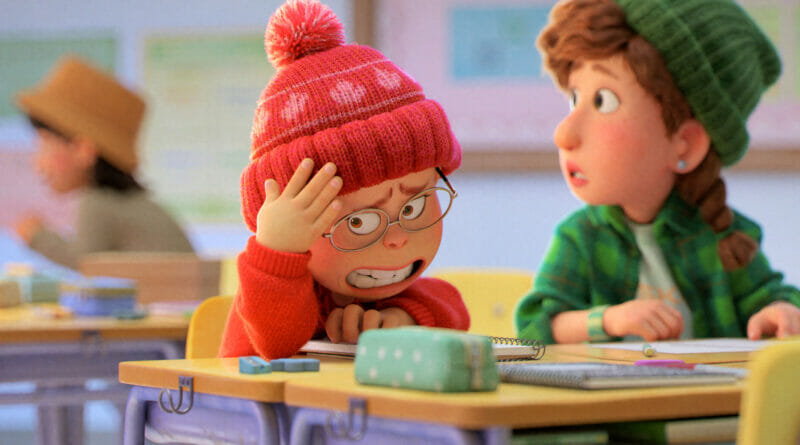 ‘Turning Red’ Review: A Heartwarming Fantasy Film That Children of All Ages Can Relate To


Turning Red is a wonderful film that teaches kids the important lesson of accepting themselves and their flaws. How our uniqueness should be celebrated instead of shunned.

Pixar has done it again! Adding another fantastical movie to their long list of animated greats! ‘Turning Red’ is a movie that fits in the more heartwarming category of Pixar movies like the recent “Luca.” Not a tear-jerker like some of their most famous animated hits but a cute movie that I think a lot of kids will enjoy. Directed by Domee Shi (Bao, Purl), Turning Red is a fantastical coming of age story about a 13-year-old Chinese-Canadian girl named Meilin (voiced by Rosalie Chiang) who suddenly transforms into a giant red panda whenever she gets excited or stressed due to her ancestors’ associated mystic connection with red pandas.

Friendship, acceptance of one’s flaws, and personal growth are just a few of the underlying lessons you will take away from this film. Taking place in an incredibly detailed Toronto, Meilin and her supportive friends go through everyday life as middle schoolers in 2002. Nostalgia from that time period really hits from their clothes to their obsession with boy bands. In this case, the boy band is 4 Town, who unironically and hilariously sounds like one of the biggest boy bands from the early 2000s, NSYNC.  The constant nostalgic waves throughout the film will be something many parents will appreciate.

The animation is great! It takes on this anime-like quality to it that really works well with the comedy in this movie. The facial expressions are super expressive which works when emotion is the trigger for turning the main protagonist into a large red panda. The color in this animation is vibrant. The texture in the movie is some of the best I have ever seen. Especially when it comes to hair and fur textures. You can see every individual strand of fur on this red panda. There is also a scene with food that looks so real you forget you’re watching an animated movie for a second and not a cooking show. Heavily reminiscent of scenes from a Makoto Shinkai film.

The supporting cast is equally hilarious. Meilin’s mother Ming Lee, played by the ever so talented Sandra Oh, is both loving yet strict. She has high expectations of her daughter which stops her daughter from having a social life. Even though she is so strict with her daughter you can tell how much she cares about her. She goes to crazy heights to be as involved as she can in her life. Her friends are a delightful treat in this movie.  Ava, Prya, and Abby are a diverse group of friends that just love Meilin so much. They cheer her up when she’s down and support her 24/7. I love how much of a fangirl these girls are. Their interactions are just so amusing to see on screen. If they made a spin-off show of these girls just hanging out I would still be entertained. The film was fast-paced so there was never a dull moment in my opinion.

The music for the 4 Town boy band is written by the famous Billie Eilish and Finneas O’ Connel. They capture the essence of an early 2000’s boy band. They wrote three songs for this fictional boy band that you hear throughout the movie. They are catchy so you can see why Meilin and her friends are such huge fans of them. Ludwig Göransson (The Mandalorian, Black Panther) composed the film’s score, making it his first animated film composition. Goransson’s instrumental composition is captivating and breathtaking.

This movie is relatable on so many levels. I really relate to Meilin when it comes to being the perfect daughter. We both were A-plus students, the responsible ones who always had to do the right thing. It’s hard when your parents put such high expectations on you. Rosalie Chiang did an excellent job as Meilin. Portraying what it’s like being an emotional teenage girl perfectly. She has to portray a lot of emotions for both dramatic and comedic effects. The film also deals with aspects of puberty, even though the film does not directly talk of biological changes. For example, Mei’s mother first mistakes Mei’s reaction to her transformation as if she was having her first menstruation. Director Domee Shi said they were “unapologetic” about the discussion of these topics in the film; the title Turning Red itself an allegory for this time in a young woman’s life. It’s great that young girls can relate to this.

I appreciate Disney having more diverse animated movies lately. From Encanto to Turning Red, kids are being exposed to different cultures and their traditions. We are also getting more diversity and I am sure kids will be happy to see themselves represented on screen. I think diversity is very important when it comes to Disney movies. I applaud Turning Red for sharing parts of actual Chinese culture in this movie. Not to mention all the voice actors are of the same ethnicity as the characters they are playing. The director and writer of this film being Chinese are amazing. I hope we get to see more of this in the future.

Overall, Turning Red is a wonderful film that teaches kids the important lesson of accepting themselves and their flaws. How our uniqueness should be celebrated instead of shunned. The story manages to throw some twists and turns near the end that will leave you surprised. Every character is likable as well.  It is definitely one of Pixar’s most comedic films to date! Even if there’s an action scene a joke will sneak up on you to make you laugh.  If you’re looking for a fun movie to watch with your kids this weekend, I highly recommend this one!