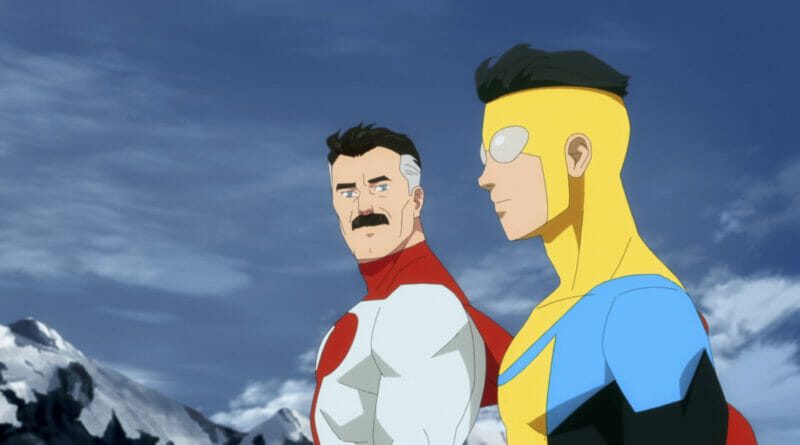 
**WARNING: SPOILERS AHEAD FOR INVINCIBLE EPISODE 4**

Invincible has been on quite a roll recently for its now 4-episode run. Every episode we have spent watching Mark Grayson develop into his superpowers has been incredibly engaging to watch, whether or not we are following him or any of the other memorable characters in the show’s ensemble. Invincible Episode 4 titled Neil Armstrong, Eat Your Heart Out, is no exception; with this episode, not only does the tension-filled murder plot surrounding Omni-Man and the Guardians of the Globe take a dramatic turn, but plenty of plot hooks are introduced that are all but guaranteed to lead to bigger issues for our heroes as the season progresses.

The episode’s main plot focused on Mark finally going on an out-of-this-world adventure all on his own. After Nolan denies Cecil’s request to defend a mission to Mars, Mark takes it upon himself to watch over the two-week expedition. During his time there, he inadvertently lets the astronauts get kidnapped by Martians, and after finding them, he saves them after the Martian Emperor announces their execution in order to avoid possible infection from parasitic creatures known as Sequids.

He does eventually get them out of danger and back onto their ship, and all seems well…that is, until it’s revealed that not only did a Martian replace one of the astronauts, but that the Sequids have already infected the one that was left behind! Just as the Sequids start to overwhelm the Martians and start combat, we cut back to Mark just arriving back home.

Just because Mark has left the planet in this episode that doesn’t mean that interesting things aren’t going on back on Earth. After noticing Debbie’s doubts regarding the murder case, Nolan buys himself time by taking her to Rome in order to rekindle their love. Meanwhile, Cecil realizes that Nolan is the one responsible for murdering the Guardians of the Globe, but the lack of a motive means he cannot intervene just yet.

Knowing that Darkblood will do all he can to stop Nolan, Cecil takes drastic measures, to the point where he exorcises Damien and sends him back to Hell! On top of all this, Robot, who let the Mauler twins escape from prison last episode, steals a blood sample from Rex Splode, with the final reveal of the episode being that he is trying to resuscitate someone in a stasis chamber, saying that “phase 1” has officially begun.

The new plot thread of the Martians and the Sequids is definitely an interesting one, especially since it already has made a major impact on the season in this introductory episode. As the Martian Emperor explained, the Sequids are incredibly dangerous when attached to a host, to the point where just one Sequid having a host would lead to the Martians being overthrown. Clearly, that is implied just before we leave Mars for good. The question here is, how badly will the Martians be beaten?

Moreover, since their coming to Earth is all but inevitable, how dangerous will they be to humanity? If they can create an entire wave of themselves just because of one human connection, what might they be capable of if they latch onto more humans? The catalyst for this fight has already been triggered, so it’s only a matter of time before the Sequids set their sights towards new planets to conquer.

In connection with this, who is this Martian that replaced the astronaut that got infected? All we know so far is that they escaped Mars, but why did they try to escape? Are they a fugitive, someone just wishing for a different life, or somewhere in between? Moreover, are their intentions good or evil? And how will their true identity be revealed, if at all? Their self-serving decision to leave Mars with the humans has a lot of ramifications that came with it, and I for one look forward to seeing how things play out.

The Earth-based developments in this episode were just as unexpected yet welcome. Cecil chastised Damien for seeing the world in black and white, which is why he needs him out of the way to fully figure out the investigation. The question is, how will this affect the murder case going forward? Damien was getting results, regardless of his methods, but now that he is in Hell, will things be rougher for figuring out Nolan’s motives? Furthermore, we often saw him writing in a notepad while investigating, so there is a chance that might have been left behind and that someone might discover it later on. For now, all we can do is hope for the best.

Finally, Robot’s surprising heel turn has finally been given a reason. The episode has given no indication of who the person in stasis is, but clearly, it’s someone important to Robot if he took the blood of a co-worker to use on him. Is the person his host, or perhaps a loved one? And if he manages to revive the person in stasis, where does he go from there? Is this just a selfish phase, where he will become a full-on hero once his personal work is done? Or was this his entire reason for creating the New Guardians, which means he will abandon them as soon as he finishes his goal?

Despite being at the halfway point of the season, this manages to introduce a new plot thread seamlessly into the show while developing its old ones in surprising yet welcome ways. Invincible continues to be a well-animated, well-paced, and witty show, and I look forward to seeing what the second half of the season does to compliment everything the first half has set up.

For more film, gaming, anime, and TV news, trailers, and updates make sure to keep it locked right here at The Nerdy Basement. And while you’re here, consider supporting us on Patreon as well! It’s an easy way of supporting us so we can keep proving you with your Nerdy News!