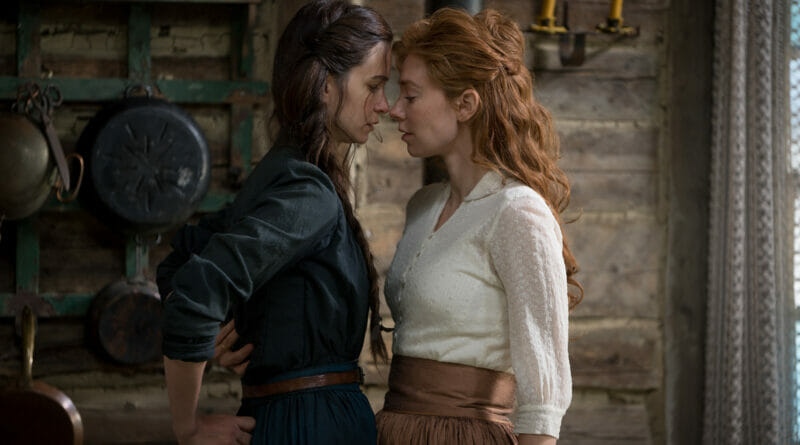 The World to Come: Bury Your Gays, Reap Disappointing Harvests


***WARNING: THE WORLD TO COME SPOILERS AHEAD***

It is not too uncommon to see period pieces focused on LGBTQ+ themes in film nowadays. Even though this is a more recent trend in Hollywood overall, films like Brokeback Mountain and Portrait of a Lady on Fire have made this sub-genre a mainstay for the foreseeable future. Bleecker Street’s The World to Come follows this trend, with the exception of its story taking place in colonial America.

With LGBTQ-oriented stories being on the rise in regards to Hollywood’s output, this Feb. 12 release initially seems like it will deliver a heartwarming love story to ease people into the 2021 movie scene. While the film initially succeeds in aiming towards this goal, it loses nearly all of its goodwill by the time the credits roll. Visually there is plenty of merits: the set and costume design is incredible, and the time period’s portrayal genuinely feels authentic. In addition to mostly solid acting, The World to Come sets itself up to be full of potential and adoration. Unfortunately, its narrative choices are what keep it down and make its impact all the more barren.

Taking place in 1800s America, the film follows Abigail (Katherine Waterston), a housewife who, despite living comfortably with her husband Dyer (Casey Affleck), is not content with the way things are in her life. This shifts when she is introduced to Tallie (Vanessa Kirby) and her husband Finney (Christopher Abbott). Abigail and Tallie start growing closer with each passing day, even as outside conditions worsen and their husbands grow suspicious of their interactions. Yet as tensions keep rising, the two women find solace in each others’ care, with Abigail realizing that there is much more to life than just living with the hand she was dealt with.

With a premise as grounded in reality like this, there are no true moments of fantastical wonder in The World to Come. Rather, the appeal must come from three major sources: its atmosphere, the chemistry of its actors, and its writing. Let’s first focus on the former: the atmosphere. When it comes to immersing viewers into its world, this is where The World to Come excels the most. There are a small number of setpieces within the film, but each of them feels rich with personality due to their having a unique look.

The sets used here all feel incredibly rustic and have the right amount of griminess that leads to them feeling authentic but not oppressive. Furthermore, the costumes all feel appropriately designed without appearing too flawless, and the technology used within each scene adds to the atmosphere, with each invention being used seeming believable for the time. Combined with frequent use of nature shots in order to establish the scenery and sparingly used music, the film does a stellar job of making its world feel immersive, making it feel like you are there with the characters themselves as opposed to watching them through a screen.

Next comes the film’s cast, and luckily, The World to Come is mostly full of strong performances. The main cast is incredibly small, meaning that the pressure is almost entirely on them to make the movie worthwhile, especially since there are no action sequences to hide behind. Luckily, this drama has two stellar leads in the form of Katherine Waterston (Fantastic Beasts and Where to Find Them) and Vanessa Kirby (The Crown, Mission: Impossible – Fallout). Individually the two are decent enough at their jobs, with Waterston making Abigail a sympathetic figure whose journey of self-confidence you can’t help but admire and Kirby making Tallie an alluring force of positivity that we, like Abigail, learn to love with time.

When the two of them come together, both of them shine their brightest. They both share brilliant chemistry with each other, and it is nearly impossible to watch their shared scenes without a smile growing on your face. The two genuinely feel like a pair you want to root for, and considering that The World to Come‘s premise is centered around their chemistry, this part being strong is a huge relief.

In regards to both women’s husbands, their overall performances are very hit-or-miss. Christopher Abbott (It Comes at Night, First Man) does a great job of playing Finney, Tallie’s husband, as a devout but over-possessive man, who is willing to do anything in order to keep his reputation intact, no matter what it costs, whether it be his house or his wife’s joy. Moreover, he becomes someone that is easy to detest, meaning that he fits his role to a T. Sadly, things get a bit muddier when talk turns towards Casey Affleck (Manchester By the Sea, A Ghost Story) as Dyer, Abigail’s husband.

Despite having an Oscar under his belt, Affleck’s performance feels the most mediocre out of everyone in the film. His lines feel like they have the same amount of direction no matter the circumstances, which is to say, not a lot. At times I forgot that he was in the movie, which basically squandered any chance Dyer had of being a memorable character, even if he was just a secondary antagonist to prevent the leading women from getting together. To see Affleck on screen in this was honestly an unpleasant experience, as there were several actors that could have played Dyer instead and made him more likable and present in the process.

Finally, the biggest aspect a film like The World to Come should excel in is its writing. Unfortunately, this part turns out to be the movie’s biggest flaw, as there seems to be little original about it or the direction it takes. The premise of two closeted people falling in love and hiding their secret relationship from others is not a unique plot, and that rings through the entire first half of the film. Even when it is enjoyable to watch in part to Kirby and Waterston having impeccable chemistry, the story happening around their interactions feels cookie-cutter at best and tedious at worst.

I was able to predict basically everything that happens in the film before it happened, which can be fun if discussing a single plot twist, but not an entire film. This especially shines through in the ending, which takes a dark turn that, while making sense in the context of the world’s story, is one that Hollywood does not need right now. To put it lightly, as of this writing, there seems to be an abundance of LGBTQ+ stories that focus on the tragedy of being in those kinds of relationships. And frankly, it seems like these dark films are a bulk of what Hollywood seems to be interested in without much interest in other kinds of LGBTQ+ films.

In doing this, at times it feels like they are belittling or devaluing the relationships they are trying to capture. This is especially visible with the trend of “bury your gays,” or having LGBTQ+ characters be much more expendable than their heterosexual counterparts, being a common thread between some of the media under this umbrella. The World to Come is one of those films, opting to add to this tragic narrative by killing off Tillie and having Abigail mourn over her while trying to accept the growth that she had because of that relationship, all while the film expects audiences to be completely fine with this unnecessary sadness that was presented in the story.

Endings like this one undermine equal LGBTQ+ representation in media rather than challenging it, all while making it harder for The World to Come to forge its own identity. While it may have an ending that makes sense within its own story, the writing here has wound up being complicit in adding onto a harmful narrative that hinders opportunities for different kinds of LGBTQ-focused stories with more positive outlooks to have their turn in the spotlight.

The World to Come has a lot going for it on the surface, which made it all the more disappointed when its contents seemed to leave me disappointed in several ways. There are several aspects worth enjoying; the visuals and audio do a great job of immersing viewers into the film’s world on top of appearing appropriate to the age that the story takes place in, while the acting is almost completely enjoyable across the board.

However, one of its actors having a subpar performance, i.e. Casey Affleck, still means that one-fourth of the movie is badly acted, and this is not helped by an incredibly predictable plot that contributes to a harmful narrative of LGBTQ+ stories in Hollywood that should be broken away from rather than continued.

The film may not be the worst way to start off the 2021 film year, but I can’t say that it is one that I intend to watch again or root for once awards season comes around. The World to Come may seem enticing enough to keep you entranced for most of its runtime, but in the end, it will leave you feeling unsatisfied and wanting much more from it by the time the credits roll.