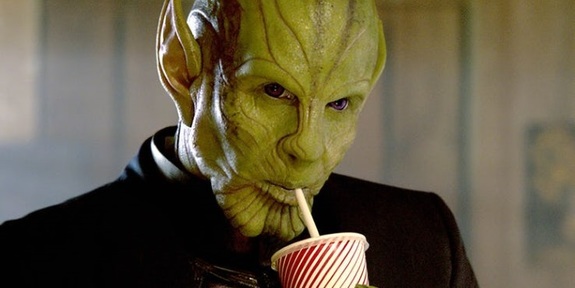 A SECRET INVASION DISNEY+ SERIES IS REPORTEDLY IN THE WORKS, WILL TIE DIRECTLY INTO CAPTAIN MARVEL 2

According to a new report by MCU Cosmic via Daniel Richtman’s Patreon. A Secret Invasion style series is reportedly in the works for Disney+ and the series will reportedly tie directly into Captain Marvel 2. The series is set to involve the Skrulls, who, as mentioned above were introduced in Captain Marvel’s first solo film. Additionally, the series will reportedly include S.W.O.R.D. who will make their MCU debut in WandaVison.

Those are the immediate details, and while nothing else is revealed beyond that. This is something many fans have speculated about even more since Spider-Man: Far From Home, when Nick Fury and Maria Hill were revealed to be Skrulls the entire time. Not only that, there was a quick mention of Kree sleeper cells. Combine that with the revelation that we were seeing Skrulls in disguise the entire time, it adds more fuel to the speculative fire that has been brewing ever since.

While the Skrulls we met in Captain Marvel weren’t necessarily evil, they did come off a bit menacing at first until their true intentions were revealed by their leader Talos, played by Ben Mendelsohn. Adding more weight to this tidbit of news is a direct quote from Kevin Feige himself, where he reveals that we have yet to see evil Skrulls in the MCU.

It’ll be interesting to see how Marvel plays around with S.W.O.R.D., Skrulls and a Secret Invasion. S.W.O.R.D. has been something that’s been teased for the MCU for quite some time as well. While Agents of S.H.I.E.L.D. was connected to some degree to the broader side of the MCU. We never got a full introduction to S.W.O.R.D., that’s up until their introduction was teased at the end Spider-Man: Far From Home in a ship where Nick Fury was seen “vacationing”.

WandaVision looks to be opening a lot of new doors to the MCU and while Secret Invasion is a storyline heavily affiliated with Skrulls, The Avengers and Captain Marvel. The introduction of both S.W.O.R.D. and Hulkling, who will reportedly be looking for refuge on Earth while seeking aide from S.W.O.R.D. to assist with that. You have many seeds being planted for a Secret Invasion/Kree-Skrull War-esque series that will affect the entirety of the MCU.