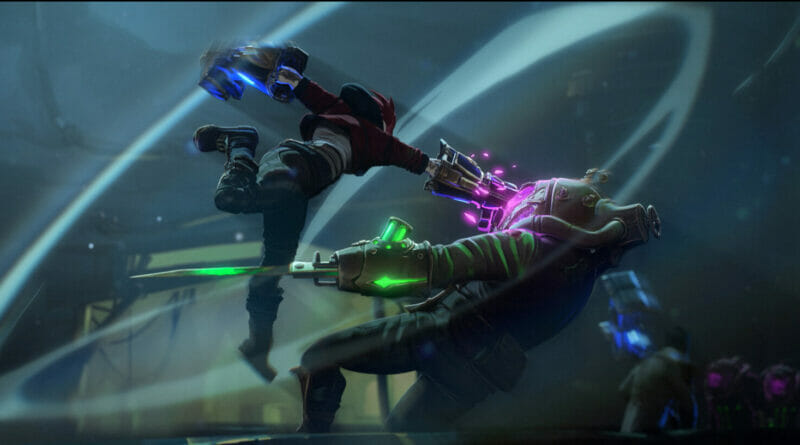 ‘Arcane’ Act Three: Blasting Off in A Glorious, Intense Finale


**WARNING: SPOILERS AHEAD FOR ARCANE ACT 3**

“Arcane” has been a powerhouse for the entirety of its run on Netflix, both in regards to its animation and especially so in its storytelling. After the cliffhanger Act 2 left us on, millions of fans were anticipating the final section of this complex and engaging story. So many plot threads were being weaved together, and so many of them could only have ended in tragedy for the characters involved. Who would live and who would die? Who would certain people become and what turning points would be reached? What would the fate of Piltover be? These and many more questions flooded social media, down to the last minute before Act 3 was released this past Saturday.

Through an intense three hours, “Arcane” goes down to the last minute in resolving plot threads and creating new ones, all without feeling too bloated. Balancing the perfect amount of action and political intrigue once again, the show fleshes its large ensemble cast out in ways welcome and unexpected alike, all while taking directions that barely anyone could have suspected, all to create one of the most memorable finales of this year. Through masterful writing, creative fight scenes, and an unwillingness to back down from darker themes, “Arcane” has cemented itself as an essential watch for anyone on Netflix.

Piltover is on the verge of a civil war when we reenter the world of “Arcane”. Jayce and the Council have shut down the bridges between the city’s districts, Vi and Caitlyn have been taken hostage by the Firelight gang, and Jinx is heading further into her mental unraveling at the hands of Silco and his twisted visions of equality. With a delicate balance being walked between both sides of the city, who will get caught in the crossfire? These questions and more will have you at the edge of your seat, as the fate of Piltover and its people hang in the balance; yet no matter what the result is, the city will be changed forever.

With so many characters being featured in the show, you would think that some plot threads would be forgotten or dropped. Instead, “Arcane” addresses each of them in an orderly fashion that feels most natural. Even if some episodes focus on certain plot threads more than other ones, all of them are furthered in some capacity in each episode, making it really feel like every character has an important part to play in the story. Not every show with ensemble casts can make all of them unique and important to the show’s plot, but “Arcane” succeeds here with flying colors.

Speaking of colors, even more, impressive than the show’s balancing of characters are the various setpieces within each episode. Not only does the animation remain quality, but this batch of episodes also has some of the more unique fight scenes of the show’s run, with plenty of intensity and flow in each encounter. Episode 7 in particular has one of the most unique fight scenes in the series, as it both has intense action… and technically doesn’t at the same time. What do I mean? You’ll just have to watch and find out.

The animation does not just stick out when things are fast-paced though; so many scenes in this final act are built on tension and waiting on characters on opposing sides to break, and some of these moments are more heart-wrenching than the combat scenes. Thanks to unique settings with gorgeous direction behind them, and animation that allows characters to tell their stories with the subtlest of expressions. A good show builds on top of its fight scenes with dialogue and said dialogue works best when it is with fully fleshed out characters that all have something to gain or lose in each word they say. “Arcane” does this in spades, and no scene feels inessential or monotonous.

Good characters are only as good as the people speaking them into action, and “Arcane” yet again has a strong voice cast all around. Hailee Steinfeld and Katie Leung maintain a strong sense of chemistry as Vi and Caitlyn, with the two sharing a great dynamic that makes you actively root for them. Even though they come from different worlds, their common goal and die-hard commitment to each other is touching to watch. Reed Shannon’s debut as an older Ekko was surprising, but enjoyable all the same. The innocent boy we knew has now grown into a weathered but passionate and caring leader for the Firelight gang, and Shannon manages to convey the hurt and the conflict Ekko faces beautifully.

Without question though, Ella Purnell takes the cake of having the best performance in the show as Jinx. Being the arguable centerpiece of “Arcane”, Jinx has gone through trauma after trauma, with this last act pushing her to her absolute breaking point. What was once a bubbly and erratic character League fans knew and loved is now one of the most tragic characters in television this year, and Ella conveys Jinx’s fragile sense of sanity perfectly. From her confliction on which side to trust – Vi’s or Silco’s – to reliving her old traumas and bearing new ones, Purnell makes you want to cry for Jinx, and you will want nothing more than for her to somehow break free of her involuntary torments, even if you know that cannot happen. For a character with such love behind her, now that love has been twisted into something even more beautiful and a lot more heartbreaking.

All of these characters are backed up by writing that propels them into the final act with near-flawlessness. Though there are some arguable weak points, such as Vi being a relatively static character compared to her counterparts, they can either be justified within the context of the show or are so minuscule they do little to hold the show back. The show’s gray areas remain present, with no two sides being completely right or wrong. Even if you personally disagree with one character’s views or actions, you can at least understand where they are coming from.

The world is complex, and I mean that for both our own and Piltover and the latter mirrors our own well in regards to not every solution being cut-and-dry. “Arcane” treats its audience with respect in how its themes are handled, and even though nothing is technically perfect, it mirrors our reality. By the time the final episode cuts to black, you will be left reeling at everything you have just seen in the best way possible.

Act 3 of “Arcane” sticks the landing for the show in all the best ways, capping off everything with style, substance, and the right amount of snark. “Arcane” not only stands as one of the best video game adaptations but one of the best shows on Netflix. Everything in the show has a sense of purpose and beauty to it, and it is such an engaging watch that you will want to go through it all over again as soon as you finish (I certainly intend to rewatch it, at least). With Season 2’s announcement recently being made, I cannot wait to see how Piltover and the people within it fight for its survival. “Arcane” pulls you in in all the best ways, and it keeps you locked in for the entirety of its amazing ride.