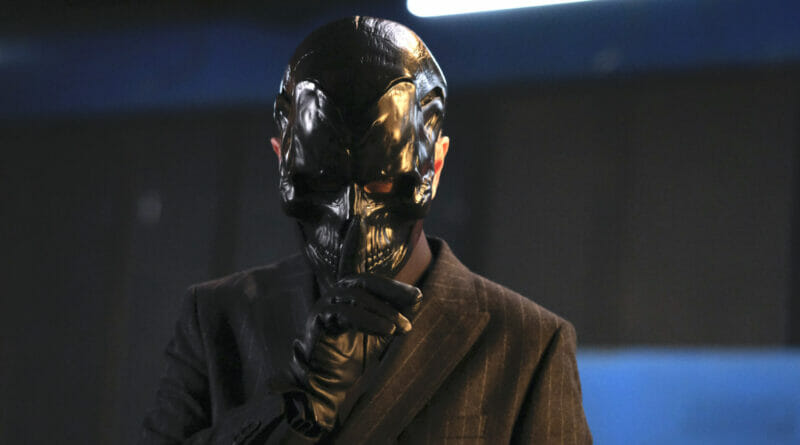 Batwoman Season 2 is back with its mid-season premiere and Batwoman has wasted little to no time in declaring “war” on Black Mask and the False Face Society. While the move is bold and asserts Ryan Wilder’s drive and desire to really be taken seriously as Batwoman. Taking the microphone away from the reporter just to threaten Black Mask on national television was downright laughable.

Picking up where we left off a few weeks ago, Ryan is assisting in opening a community center offering multiple community programs for at-risk youth in hopes to pave the way towards a better future for the coming generation. After the opening speech, the ceremony is somewhat interrupted by former Gotham Gazette reporter Horten Spence whose main concern is the security of the community center. Sadly, his rather important question is diminished as he is “owned” by the head of the community center.

After Spence leaves the community center the center is attacked by a mysterious villain dubbed Kilovolt leaving Team Batwoman suspecting that Horten Spence is Kilovolt and his attack is some sort of revenge due to him being fired from the Gotham Gazette. However, when Batwoman confronts Horten Spence who just so happens to also be expecting to be attacked by Kilovolt, informs Batwoman that he was fired from the Gotham Gazette because he was looking into the reasoning behind at-risk youth community programs were being attacked.

While each attack on the three other community centers is distinct, they all have one specific thing in common and that’s why Spence was looking into that and working up a story. Horten and Batwoman are then attacked by who they now believe to be Kilovolt who leaves Horten Spence extremely injured.

After further investigation, Team Batwoman learns the identity of Kilovolt, Michael Kastrinos; who’s currently locked up in Edgewater Prison. However, the discovery serves them nothing because Mickey K. has been locked up for the past two years so there’s no way this could’ve been him so for the time being he has an alibi. That’s until Luke discovers that the prison camera footage has been reused and given a new timestamp.

Luke reveals to the team that Edgewater Corrections CEO Ellis O’Brien has been letting prisoners out at night to commit crimes in exchange for early parole which he will sign off on. O’Brien also sits at the board of the Gotham Gazette so once he learned that Horten Spence was looking into why these at-risk community programs were being attacked, he had him fired.

While all of this is happening we get a couple of side plots for Jacob Kane who was chloroformed and given a dose of snakebite. Looking for information on snakebite and how it affects the people who take it. Jacob talks to Dr. Evelyn Rhyme aka Enigma. Dr. Rhyme informs Jacob Kane about the effects of snakebite and tells him that the reason people are so hooked on it is that the hallucinations they cause allow the user to alter and rewrite certain memories when they revisit them.

This is why Jacob is able to save young Alice when in reality as we learned in season one, he wasn’t able to. Trying to cope with that new sense of false relief and reignited guilt trip, Jacob wants to get his hands on more snakebite. Coinciding with this and tying things all together is Alice and Agent Pennyworth who have temporarily teamed up to find out who Enigma is since she erased memories from both Alice and Agent Pennyworth. After her encounter with Dr. Rhyme, Agent Pennyworth is sedated as when she comes she submits a transfer request to Berlin which is granted to her.

Alice doing her side of the work comes across Dr. Rhyme’s session recordings with her father Jacob. After hearing how her father feels about what happened to Alice as a child, she reveals that as much as she wants to forgive him, it’s so much easier to just forget.

After learning what she learned about Ellis O’Brien, Batwoman sets out to confront him and seek answers as to why he’s attacking at-risk youth programs. He reveals that it’s a way to manipulate the system to cause further generational incarceration. Take away the resources to uplift the community and they’ll have no choice but to tear themselves down. And seeing how the prison systems work and how much money they make from incarcerations, it’s only fitting for him to extort that and keep the prison system flourishing at the expense of others. As O’Brien tries to get the one up on Batwoman Luke comes in to save the day and Batwoman.

The episode wraps up by setting up a few plot threads like Sionis hand-delivering Jacob a dose of snakebite which he eventually injects himself with. Jacob offers Mary the opportunity to make her underground clinic an official clinic which she refuses due to the fact that it will limit her ability to help those who don’t have the means to be helped. Angelique who was convinced to snitch on the False Face Society ends up getting abducted while in witness protection.

This season of Batwoman has taken a huge dip in quality and has really stumbled with its storytelling. Something that I’ve been mentioning since its premiere earlier this year. Ryan Wilder at times is too capable but a lot of times is incapable. That’s not even taking into account the lingering story of Kate Kane who is now back in the show and has been recast.

Batwoman Season 2 has struggled to find its footing and now that we are at the halfway mark of the season I can only hope it gets better. Black Mask’s mask is laughable, some of the plot threads are overly predictable and the only plot thread that was really the highlight of the series so far which is Alice has taken a backseat. And as I mentioned above, and as reported by news outlets, we will be learning about what happened with Kate Kane and why she has a new face.