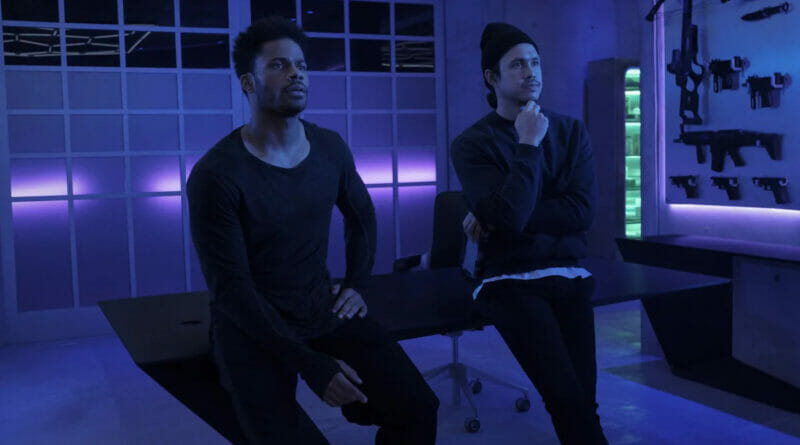 
This week’s episode of Black Lightning is serving as a backdoor pilot for the upcoming Painkiller series, is there anything to really look forward to?

Black Lightning is back after taking a few weeks off the air and with its return, it brings the backdoor pilot episode for The CW’s upcoming Painkiller series starring Jordan Calloway. As the episode kicks off we get a quick recap of what happened with Khalil and Painkiller in Black Lightning Season 3 which saw Khalil leaving Freeland to an undisclosed location. In this pilot episode, we learn that this location is Akashic Valley. Khalil ventures to Akashic Valley looking to attain peace of mind and body and overall control over his inner duality.

Last we saw Anissa and Grace, they made plans to celebrate their honeymoon somewhere. That somewhere just so happens to be Akashic Valley. Akashic Valley sadly doesn’t look all that great and I get the Bladerunner Cyberpunk vibes they were going for with the Wakanda-style technologically advanced setting but it looks rather unpolished and a little too unrealistic. Put simply it doesn’t look as good as The CW might want it to be or thought it would be.

Circling back to Anissa and Grace who are enjoying a night out. Things go south as Grace is kidnapped. As Anissa starts looking for Grace she runs into one of the kidnappers and a fight ensues. Meanwhile, Khalil and Painkiller are debating about whether or not to kill Anissa as seeing Anissa has triggered Painkiller and his kill order.

We are then introduced to Philk, a citizen of Akashic Valley who was saved by Khalil and helped him get his hands on a ton of money that was being stashed away by the ASA and aided him in getting his mind stable enough to temporarily suppress Painkiller. This is all in return for Khalil helping Philk get back on his feet, building him the bar and a secret underground lab.

Anissa is still recovering from her initial encounter with Painkiller and agrees to let Khalil search for Grace in order to find out who kidnapped her and why. As Khail and Philk go off in search of Grace we learn more about the mysterious woman known as Maya and how she’s kidnapping people to essentially drain their brains. Learning about the tech she uses to drain the brains of the people she kidnaps, Khalil and Philk think they can use this same technology to further stabilize Khalil mentally and suppress Painkiller for good.

One of and this is probably the only highlight of the entire episode is the mental talks between Khalil and Painkiller and the action sequences that involve them both. Prior to finding Grace, who ends up freeing herself and escaping herself (huh?), Khalil and Painkiller have a talk about the task at hand and how Khalil will let him out so they can complete the mission but he has to agree not to kill Anissa or Grace, Painkiller agrees.

After the dust settles and Maya sets her building to self-destruct, Khalil and Painkiller have another heart to heart. Sharing a tender moment, Painkiller shows a side of himself that we have never seen…vulnerability. Talking about the death of their mother, Painkiller tells Khalil that she was his mother too and that her death, despite being his own doing, still hurts him. Khalil then promises Painkiller to make things right, and not by suppressing Painkiller but by bringing them peace so they can coexist rather than fight for dominance.

To cap things off, Khalil and Anissa have a talk and he asks Anissa to not tell Jeniffer of his location as he doesn’t know how he’d react if he saw her, as well as not knowing how Painkiller will react either as he still has the kill order him. We also learn the identity of Maya as being the daughter of Percy Odell, leader of the ASA.

Overall, this pilot was rather weak and a lot of the plot thread presented could’ve been wrapped up in this episode but weren’t due to the fact that this will spin out a brand new series. While the action sequences are great and that’s probably the only highlight of this entire episode, the episode doesn’t leave you with a clear sense of direction on what to expect in the upcoming series other than Khalil trying to suppress or coexist with Painkiller. We’ve been there done that.

We also don’t know if this is why Black Lightning is coming to an end nor do we know if any of the Pierce family members will be making an appearance in the series post haste. Which in turn makes you wonder if this series is really even necessary and if it is, why couldn’t this story be told within a 22-23 episode season of Black Lightning as opposed to canceling Black Lightning altogether.